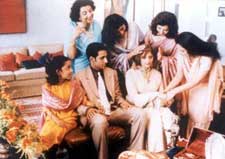 EDITOR RATING
6.0
Performances
Script
Music/Soundtrack
Visuals
NA
NA
NA
NA
Suggestions
Can watch again
NA
Good for kids
NA
Good for dates
NA
Wait to rent it
NA
All's well in God's own celluloid land as director Mira Nair retraces her roots and finds the raison d'être for her movie Monsoon Wedding. Looks like the phantom myths of makki ki roti and sarson ki saag were the driving force for this once-accomplished-lady to churn out this rather banal flick that absolutely predictably caused some sort of a sensation in the land of the phirangs.

For all the hype and hoopla, the film is nothing more than Hum Aapke Hain Koun sans 14 songs and one particular Madhuri Dixit. It's just the sort of flick that artsy-fartsy Europeans/Americans would like to see to broaden their knowledge of India, and learn about the only two states (Rajasthan and Punjab) which constitute the Republic. If I were a Westerner, I probably would have been thrilled to see the rather elaborate wedding arrangements, but alas, thanks to my Oriental origins, I see the movie as nothing more than an effort to cater to Western tastes.

So here's the dope about another film, another Punjabi wedding. Aditi (Vasundhara Das), the bride in question, is about to be married off a guy from (yaaawn) the USA. But then she still likes her boyfriend, a much-married one at that. Pa Lalit (Naseeruddin Shah) and Ma Pimmy (smoking guns Lilette Dubey) love and care for their daughter and want her to have a happy life, and unawares of the behind the scenes activity, begin the marriage preparations. This is the alarmingly lame first half.

The vociferous relatives all arrive, and also in the same package comes a pedophilic uncle. Charming cousin Rhea (Shefali Shetty) senses trouble when she sees the uncle zoom into his target, a little girl called Arya. Rhea has a foreboding sense of doom as she tries to protect the child.

What ensues in the second half is interesting and has a great scene between Rhea (Shefali Shetty) and Naseeruddin Shah (the scene lasts 15 seconds, but still). It was a really good histrionic effort by both actors who unfortunately otherwise fade away in insignificance amidst the jarringly loud background score and some inane scenes between a flower-chomping tentwallah and the maid. This couple seems to have stuck plenty of loud chords with the public, and I distinctly heard several guffaws from the audience... sheesh, is it just me or is flower-chomping in?

Anyway, the whole cast really looks straight out of a wedding video, and the feel is distinctly feel-good with just about one moment of intensity. The rest of the time, it's the Sangeet, Mehendi and the usual overly blasé stuff, that has been flogged through several degrees in Hindi flicks. I'm surprised this flick didn't feature as a National Geographic Special on Punjabi weddings. This would have given some real struggling filmmaker at the Venice Film Festival a break, and probably rewarded him for his 'film making efforts'.

If you are a Punjabi and want to relive the magic of your third cousin's second sister-in-law's twice removed second cousin's daughter's wedding, then you might want to watch the film. I really can't think of any other sane reason - unless, of course, you're thirsting to hear Bally Sagoo and Sukhwinder blasting in the background, or you have miraculously missed Hum Aapke..., DDLJ, Ninne Pelladatha, Murari and a hundred ones in between.
Share. Save. Connect.
Tweet
MONSOON WEDDING (HINDI) SNAPSHOT

ADVERTISEMENT
This page was tagged for
monsoon wedding hd movie movies
monsoon wedding review in hindi
Monsoon Wedding (Hindi) hindi movie
Monsoon Wedding (Hindi) reviews
release date
Follow @fullhyderabad
Follow fullhyd.com on
About Hyderabad
The Hyderabad Community
Improve fullhyd.com
More
Our Other Local Guides
Our other sites
© Copyright 1999-2009 LRR Technologies (Hyderabad), Pvt Ltd. All rights reserved. fullhyd, fullhyderabad, Welcome To The Neighbourhood are trademarks of LRR Technologies (Hyderabad) Pvt Ltd. The textual, graphic, audio and audiovisual material in this site is protected by copyright law. You may not copy, distribute, or use this material except as necessary for your personal, non-commercial use. Any trademarks are the properties of their respective owners. More on Hyderabad, India. Jobs in Hyderabad.