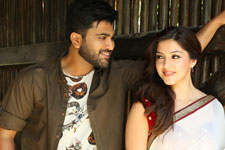 T J Reddy / fullhyd.com
EDITOR RATING
5.0
Performances
Script
Music/Soundtrack
Visuals
7.0
5.0
4.0
5.0
Suggestions
Can watch again
Yes
Good for kids
Yes
Good for dates
Yes
Wait to rent it
Yes
One of my favourite pastimes is trying to see how well movie titles align with the movies themselves. For example, a concise movie title would be Srimanthudu. A viewer goes in knowing that this is a story of a rich man while also gleaning that he learns valuable life lessons from the poor (because the 99% pays for your movie tickets damn it!). An example of a needlessly vague title which conveys little to nothing about the movie or its characters would be Masala. While this emotion is not an indictment of the movie itself, the title conveys precious little about the movie one is about see except for the fact that it's a masala movie (though most aren't sure if that's a good or a bad thing).

In my eyes, Mahanubhavudu is in a league of its own. While not as vague a title as a Temper or a Hyper, it anoints its lead as a Mahanubhavudu from the outset itself. So let us jointly indulge in my pastime as I review my latest trip to the cinema hall while checking to see if this movie is one Mahanubhavudu's mahakatha.

We are introduced to Sharwanand's Anand with the movie hammering his unique condition home. Director Maruti Dasari made his mark on the collective consciousness of the public with a quirky character (who had flaws in his ability to make and hold on to memories) in his previous project Bhale Bhale Magadivoy. Dasari doubles down on his niche by bequeathing Anand with a mix of (what the movie calls) Obsessive Compulsive Disorder and germophobia. That's the backdrop on which Dasari conjures up scenarios where never-been-kissed Anand falls in love with Meghana (Mehreen Pirzada).

Unlike Nani from Bhale Bhale Magadivoy, Anand wears his condition like a metaphorical badge on his sweater-covered chest. He proudly declares that he has an OCD and that that helps him be the best programmer, driver, lover etc. After complying with Anand's proposal and convincing her father of his worth via a fight scene, Meghana chooses to break up with him after realising what this movie's version of Obsessive Compulsive Disorder actually entails. The rest of the story follows Anand's travel to Meghana's palleturu (look at paragraph one for reasons) and his attempts at wooing her back after doing nothing wrong in the first place.

Dasari has a clear handle on one of the two primary aspects of this story. He displays a clear command on how to set up comic scenarios and have them pay off. However, he gradually loses his understanding of his story's primary conceit, OCD. Using his main hero's DISORDER and heroine's dad's heart attacks to propel the plot, the writer/director adds the quality of malleability to debilitating health conditions and his lead actress' character.

From a personal standpoint, the larger issue I have with this movie is its handling of a person with a genuine medically certified disorder. From insinuating that a person with disorders shouldn't aspire for a normal life with normal people to implying that Anand's mother, who raised him from birth mind you, feels distanced from her son by not wholly understanding his condition and does not help him procure treatment, the movie steps into one landmine after another, with each explosion opening up a whole new mushroom cloud of issues which envelop the movie.

I might be going off on a serious tangent here, but this bothers me to such a high degree because I have friends who struggle with debilitating mental disorders everyday but still strive for a normal life. They have been diagnosed with depression, anxiety, PTSD and so on. I, myself, came very close to contracting one of these disorders. In a country that rarely talks about mental health, movies like this that trivialise something so serious are most definitely cause for concern. As an example, the movie implies that an OCD germophobe will be cured of his condition by the power of love and being thrown in a wrestling pit full of sand. This is in line with someone convincing an asthmatic person that the power of love and inhaling smoke from a tailpipe will solve his issues instead of genuine medical treatment. To quote The Donald, "Sad".

Navigating this minefield to good effect is leading man Sharwanand. The man who proved his credentials as an actor's actor with his many memorable turns in movies like Prasthanam and Engeyum Eppothum (Journey) shines once again as Anand. While it's not the most nuanced of performances, he singularly manages to string the audience and his co-stars along on the bumpy ride his vehicle has on offer. Mehreen Pirzada and Nassar fill out the token roles of woman in ethnic and conservative village dad whose body thinks heart attacks are adequate responses to situations happy and sad, respectively.

In addition to nonchalantly picking off scenes form Khushi, Swades and his previous project, the movie has songs and choreography accompanying them that leave a lot to be desired in the originality department. In the spirit of staying sterile, the movie's look is littered with multiple instances of lighting equipment dotting the background. Someone convinced moviemakers that this was a good idea, and that person needs to sleep with the fish.

To sum this up, let's look back to paragraphs one and two. Does the movie deserve its title? In a weird way, it does. The character of Anand is hounded by irrational, uncaring and self-serving idiots in every moment of life. To me, he is a man who manages to overcome insurmountable odds and build a life for himself by dealing with a disorder and people who barely care about his condition. He is a Mahanubhavudu indeed.

Only, the movie that chronicles his story does not do justice to his unwavering will. While it's funny and breezy, its lowbrow look at the plight of many people is disheartening to say the least.
Share. Save. Connect.
Tweet
MAHANUBHAVUDU SNAPSHOT 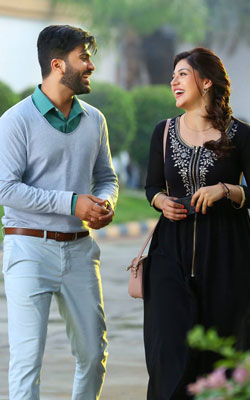 See Mahanubhavudu full details
MAHANUBHAVUDU USER REVIEWS
1 - 1 OF 1 COMMENTS
POSITIVE  |  NEGATIVE |  NEWEST  |  OLDEST  |  MOST HELPFUL  |  LEAST HELPFUL
rahulsachinsourav123 on 17th Oct 2017, 11:42am | Permalink
Had gone through reviews of this movie across lot of portals and forums. Everywhere so called intellectual critics just tom tom'ed about how funny it is, how unique concept it is, how entertaining it is, etc. But no one highlighted the fact that protagonist here is a sufferer from a disease which is not so uncommon these days and he needs compassion and treatment from others and not the insensitivity that every other character shows towards him and how they try to push him to extremes to get out of it, instead of support and empathy.

This is the only portal which pin-pointed this issue in their view point, another reason why reviews here are so unique and genuine. Good job TJ.
TJ Reddy on 18th Oct 2017, 9:37am | Permalink
As a reviewer, I like looking down the thematic lens and what a film is saying under the surface more than just the glossy exterior. it really makes me feel great that someone like the point I was trying to make.

ADVERTISEMENT
This page was tagged for
mahanubhavudu full movie in telugu
mahanubhavudu movie rulz telugu
SR0WXe1iktMsmax385v_KYO6CK9Ca_GlzsitxbBvio2e3H9etosD7Zd9igaSOYNbPFah1tCdZhyewkUKV0jx7O27qtssfMGNPf-xaPNlCH6ZFreE6XWURkcm3HBYAMg6t7rVHMeUiC06PYVFNdHdhUm5pMyMJO1NGt-2O1z45knWlL4jIXjfxC--j3FjYUF3cu82XhqjwW1uiPeRTHgGW3VqdV8iC6-Og7D8FgCcJyd0a2cXxCjR9kz2k4zjwZx0ne5hSBN3NvYYywxHL0Fav_vDfhyJRgxxRTM0xXCC9-XQtNaEUJe71mTYmOGXLyLSDep0ePeizpJyxn4oqlcmpg
mahanubhavudu Telugu movie movierulz
rajubabu gari ant
Follow @fullhyderabad
Follow fullhyd.com on
About Hyderabad
The Hyderabad Community
Improve fullhyd.com
More
Our Other Local Guides
Our other sites
© Copyright 1999-2009 LRR Technologies (Hyderabad), Pvt Ltd. All rights reserved. fullhyd, fullhyderabad, Welcome To The Neighbourhood are trademarks of LRR Technologies (Hyderabad) Pvt Ltd. The textual, graphic, audio and audiovisual material in this site is protected by copyright law. You may not copy, distribute, or use this material except as necessary for your personal, non-commercial use. Any trademarks are the properties of their respective owners. More on Hyderabad, India. Jobs in Hyderabad.