1. A movie hadn't already been made on the book
2. People hadn't yet seen everything that was to be seen in spy movies, which was to go right down to James Bond impersonators like Timothy Dalton and Pierce Brosnan
3. America was quite willing to believe that the CIA could be like a cobra - i. e., if it had a little more warmth
4. Zero-credibility plots still had novelty value, since the Americans still weren't saving the world in Hollywood

This remake, a second (after the one starring Richard Chamberlain in 1988), suffers from the opposites of all of the above, and emerges a culture clash flick - wrong movie, wrong time. Heck, we want to grab a spy movie about as much as we want to read the yellow pages. The encores for that one went out with... now, when did the Cold War end?

The Bourne Identity has Matt Damon asking himself the ultimate question: Who am I? Fished out of deep Mediterranean waters in an unconscious state, he is operated upon to have 2 slugs, a capsule with a Zurich bank account number and an extra large helping of amnesia found in him. He can't remember a single friggin' thing about who he is. But since memory comes cheap these days, he decides to go out to get some.

Now the dude may have forgotten who he was (or is, or whatever the grammar is in this context), but he's a martial arts guy who can cripple people in atomic time, talk several languages without buying a single "Learn In 30 Days" book, and generally remember random things like all license plate numbers of cars outside a restaurant. Basically some kind of freak who fell in the magic potion when he was a kid.

The bank account number leads our man to a locker which has a bag of passports that establish him to be one of two possible men (just like the PM of India these days, hee hee!), and also lots of cash. This is also the time when some people are trying to rub him out, and so he buys a trip from Zurich to Paris in a car being driven by a woman Marie (Franka Potente) whose scruples are overcome by USD 20,000.

The villain turns out to be Conklin (Chris Cooper), CIA honcho, who wants Jason Bourne (which, in light of no strong evidence to the contrary, the film assigns as Matt's name) dead because he was an off-the-books CIA experiment that went awry. Basically Bourne was

supposed to be a super-powerful weapon that the CIA created to murder an exiled black leader without any trace pointing at the CIA, but our man gets senti at the last minute and falters. No wonder the CIA doesn't care for him - even Narendra Modi wouldn't hire a guy like that! 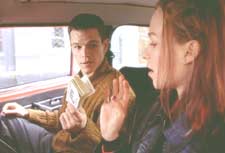 Anyway, Jason and Marie spend the rest of the movie escaping around in Paris, when eventually they discover who he really is, and life goes on. Like we said, the flick is irrelevant in a post-Cold War era where there's not much call for this kinda spy's line of work. Besides, James Bond has done everything that a spy could possibly do (and, as a bonus, has even acted in movies), which means there's nothing new. The plot is quite implausible (starting right from how Jason lives after being hurled into the ocean with bullet injuries), too. And the CIA wanting to bump off its own employees is not flavor anymore.

Damon brings dignity to a wildly fictional role. Franka Potente has a grounded charm and sex appeal about her that stem from her vulnerability. Among the others, it's unclear what Julia Stiles is doing in that bit role. Clive Owen, who plays The Professor, another CIA assassin, is a draw despite limited screen-time. He serves as the perfect ambassador for assassins.

As spy movies go, however, this one is quite good. And some great European backdrops are the highlight of the film. As for no mention of the car chase, guess who's done every form of car chase already? No, it's not Bourne, Jason Bourne.
Share. Save. Connect.
Tweet
THE BOURNE IDENTITY SNAPSHOT
See The Bourne Identity full details
THE BOURNE IDENTITY USER REVIEWS
1 - 5 OF 5 COMMENTS
POSITIVE  |  NEGATIVE |  NEWEST  |  OLDEST  |  MOST HELPFUL  |  LEAST HELPFUL
USER RATING
6.6
15 USERS
Performances
Script
Music/Soundtrack
Visuals
NA
NA
NA
NA
Can watch again - NA
Good for kids - NA
Good for dates - NA
Wait to rent it - NA
Saikrishna Avula on 25th Oct 2002, 11:36pm | Permalink
Great movie, excellently made... needn't have many shootouts and chases for being a good movie. But does disapoint if u have read the novel which is one of the best ever... people who haven't read the book won't understand that the film hasn't ended. I guess it has a sequel, 'cos Carlos the guy who was targeted when Bourne was created isn't dead yet... In fact, he kills the guy who makes the plans, so get ready for the sequel - that's where the real thrill begins!
RATING
10
Arpan on 10th Oct 2002, 9:33pm | Permalink
the book had bourne - the movie has damon... the book had carlos - the movie has a black guy who can't even stay alive till the interval... the book had a characters u could etch on a diamond - the movie has one car chase and 5 and 1/2 magazines worth shootouts... Good book - Sad movie
RATING
4
Abhi on 10th Oct 2002, 1:40am | Permalink
Horrible movie........guys if u have seen james bond movies then u will be greatly dissapointed but better than unfaithfull and sheeba which are the other english movie options u have in the town!!!!!
RATING
2
Raghu on 9th Oct 2002, 4:58am | Permalink
excellent review
RATING
4
Occasional_Critic on 7th Oct 2002, 3:35pm | Permalink
Guys, Listen up. If you have not read the book then you are in store for a tightly directed and well acted spy thriller that works from beginning to end. Those familiar with the book will no doubt be disappointed with the thin plot. Overall, It is a thriller with some brains and feeling behind it, more story and character than pure spectacle.
RATING
10
LEAVE A COMMENT
fullhyd.com has 700,000+ monthly visits. Tell Hyderabad what you feel about The Bourne Identity!
MORE MOVIES
Latest Reviews
The 355
83
83 - Telugu
Shyam Singha Roy
The Matrix Resurrections - H...
more
The Matrix Resurrections
Pushpa: The Rise - Hindi
Pushpa: The Rise
Spider-Man: No Way Home
Spider-Man: No Way Home - Hi...
Spider-Man: No Way Home - Te...
Chandigarh Kare Aashiqui
Akhanda
Satyameva Jayate 2
Ghostbusters: Afterlife
Contemporary Reviews
Stuart Little 2
XXX (Telugu)
Coyote Ugly
Chukkallo Chandrudu
Enough
more
Ratriki Velayera
Dallas Connection
How to Lose a Guy in Ten Day...
Bad Boys II
Shiva
Yeh Hai Jalwa
Mumbai Se Aaya Mera Dost
Hawayein
Nanda
Random Reviews
The Sixth Day (Telugu)
Spiderman 2 (Telugu)
Dark Water
Vaalliddari Vayasu Padahaare
Nehle Pe Dehla
more
Hero
Namo Venkatesa
Raaj
Ghost Rider - Spirit Of Veng...
Rangrezz
Hum Tum (Telugu)
I (Telugu)
Supreme
Geostorm (Telugu)
Chhota Bheem Kung Fu Dhamaka...
SEARCH MOVIES
Dissatisfied with the results? Report a problem or error, or add a listing.
ADVERTISEMENT
SHOUTBOX!
{{todo.name}}
{{todo.date}}
[
ip{{todo.ip}}
]
{{ todo.summary }}... expand »
{{ todo.text }} « collapse
First  |  Prev  |   1   2  3  {{current_page-1}}  {{current_page}}  {{current_page+1}}  {{last_page-2}}  {{last_page-1}}  {{last_page}}   |  Next  |  Last
{{todos[0].name}}

ADVERTISEMENT
This page was tagged for
The Bourne Identity english movie
The Bourne Identity reviews
release date
Matt Damon, Franka Potente
theatres list
Follow @fullhyderabad
Follow fullhyd.com on
About Hyderabad
The Hyderabad Community
Improve fullhyd.com
More
Our Other Local Guides
Our other sites
© Copyright 1999-2009 LRR Technologies (Hyderabad), Pvt Ltd. All rights reserved. fullhyd, fullhyderabad, Welcome To The Neighbourhood are trademarks of LRR Technologies (Hyderabad) Pvt Ltd. The textual, graphic, audio and audiovisual material in this site is protected by copyright law. You may not copy, distribute, or use this material except as necessary for your personal, non-commercial use. Any trademarks are the properties of their respective owners. More on Hyderabad, India. Jobs in Hyderabad.