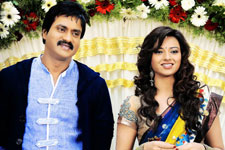 What it did succeed in doing, though, is bringing mediocrity to all-new levels of "Just OK".

So, what can possibly go wrong in a Sunil-starring story of Mr. Nice Guy getting Miss Wild Child? Not much, except Sunil, apparently. He seems to have decided that Mr. Nice Guy is not only utterly bland and depressed, but also utterly ridiculous.

For those still interested in the proceedings, here's the story. Buchi Babu (Sunil) is an America-returned fashion designer who's decided that it's time for him to settle down. Mommy (Tulasi) and Daddy (Dharmavarapu Subramanyam) shortlist a bunch of blushing brides for him.

And thus, we get to Blushing Bride No. 1, aka Anjali (Isha Chawla). Buchi falls head over heels in love with her at the "pelli choopulu". Anjali tells him to take a long hard look at himself in the mirror (with good reason, we feel, courtesy his stylist), tells him about her boyfriend, and then has him roughed up by a relative.

And that is that, until Buchi goes to his best friend Naayar's wedding in Kerala. As fate would have it, Anjali happens to be the bride's bestie.

Meanwhile, Buchi never really got over his "love" for Anjali. The two become friends over cigarettes, sight-seeing, bachelor parties and bad jokes. And just when Buchi gets a glimpse of the silver lining, who shows up, but Boyfriend?

Do Anjali and Buchi get back together? What's the big deal with saying the word "condom"? Why is Sunil's six-pack the funniest part of the movie? These are the questions that occupy your mind throughout the interminable second half.

The only thing the makers got right was casting Isha Chawla in the role of the feisty and impetuous Anjali. Unlike the loud and annoying Kangna Ranaut in Tanu Weds Manu, Isha mostly manages to hit the right ratio of realistic and wild.

Sunil is drab and uninspiring. His trademark deadpan look is just dead here. And, he talks. A. lot. As a replacement for the utterly charming Madhavan, weight issues and all, Sunil isn't even a long shot. He does not throw a single punch until the end, and is given a ridiculous Chaplinesque ten minutes somewhere in the middle to show off his potential at stunts.

The rest of the cast, although not spectacular, is more bearable.

The camera work, except in a few nice moments here and there, is as mediocre as the rest of the movie. The music is not only bad, but also in excess.

Don't be deceived by the mild funniness of the first half hour. The rest of the movie goes from attempted funniness to not-even-trying.
Share. Save. Connect.
Tweet
MR. PELLIKODUKU SNAPSHOT 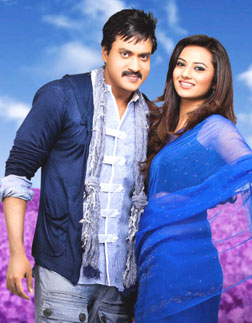 ADVERTISEMENT
This page was tagged for
Mr. Pellikoduku telugu movie
Mr. Pellikoduku reviews
release date
Sunil, Isha Chawla
theatres list
Follow @fullhyderabad
Follow fullhyd.com on
About Hyderabad
The Hyderabad Community
Improve fullhyd.com
More
Our Other Local Guides
Our other sites
© Copyright 1999-2009 LRR Technologies (Hyderabad), Pvt Ltd. All rights reserved. fullhyd, fullhyderabad, Welcome To The Neighbourhood are trademarks of LRR Technologies (Hyderabad) Pvt Ltd. The textual, graphic, audio and audiovisual material in this site is protected by copyright law. You may not copy, distribute, or use this material except as necessary for your personal, non-commercial use. Any trademarks are the properties of their respective owners. More on Hyderabad, India. Jobs in Hyderabad.