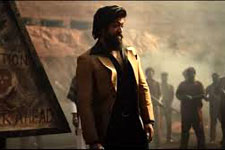 T J Reddy / fullhyd.com
EDITOR RATING
6.5
Performances
Script
Music/Soundtrack
Visuals
7.0
5.0
7.0
7.0
Suggestions
Can watch again
Yes
Good for kids
No
Good for dates
No
Wait for OTT
No
I've watched all 10 hours, 5,000 minutes and 7 billion seconds of KGF: Chapters 1 & 2. It was one of the biggest chores I've endured in my life and times in the pursuit of not being a pretentious **** and giving "commercial cinema" a chance. As the credits began to roll for KGF: Chapter 2 and the audience filed out, I couldn't leave my seat. They had fun and got their money's worth. However, I wanted to stay. 2 hours and 44 minutes in, the film's annoying and overblown nature didn't matter anymore. I wanted to see more of Rocky and his insane hijinks.

KGF: Chapter 2 is a large, loud and downright joyless film sometimes, but it manages to achieve something special. That feeling of viewers wanting more even after making them veritable gluttons with scenes of buildups, setups and payoffs that break every scientific law. How does a film like this achieve that feeling?

We must begin at the beginning. KGF: Chapter 2 opens with Rocky (Yash) and his coronation, and right off the bat, we are privy to what this film (and its predecessor) is. Making Rocky look epic by coming up with scenes of epicness is the modus operandi. Rocky is the benevolent dictator of KGF, and the hounds are after his throne. The hounds come in the form of the former heir to the throne, Adheera (Sanjay Dutt). A non-corrupt, newly elected Prime Minister, Ramika Sen (Raveena Tandon). The random assortment of villainous bearded weirdos who have too little, in terms of character, to distinguish them still exists as well. Keeping these forces at bay and holding onto his throne forms the rest of Rocky's story.

Like with Rocky himself, the film's strength is in its bombastic nature. The KGF series would much sooner be made fun of than be forgettable. Every single shot fills itself to the rafters with sound, scale, scope and fury. Its insistence upon itself is so earnest and undeniable that one cannot escape its clutches once in a theatre.

I find myself going back to a line uttered by Ali's Gudumba Shankar in Desamuduru. "Prathi scene climax la untundi," he says before narrating his life's story, and no one line can do Rocky's story more justice. Writer/director Prashant Neel, his endlessly competent technical team and his magnetic leading man think up climactic sequences as far as the eye can see, and pack the film to the brim with them. In this band of merry men and women, the mantras are "more is more" and "greed is good".

While these scenes reek of Indian masala filmmaking at its finest, there is a gaping emotional hole at the heart of this movie. That hole comes about due to a lack of downtime and of attention to emotional arcs. We know that Rocky made a promise to his mother and intends to keep it at all costs, but we don't see him grow as a person beyond that point. There is a clever thread of thought that Anand Ingalagi (Anant Nag) puts forth in Chapter 1. He asks, "Did Rocky inspire people for his ends, or did he deviate from his mission to alleviate their suffering?" This question could have led to an arc to explore when charting the rise of a murderous madman, but the film has no time for that.

The only quiet scenes come in the form of the plot narration devices played by Prakash Raj and Malavika Avinash. They do their jobs adequately but don't offer depth to Rocky. In no uncertain terms, I know and understand more about Prakash Raj's Vijayendra Ingalagi than I do Rocky.

Maybe that is the point here; we are not supposed to understand Rocky but are supposed to sit shotgun with him and enjoy the ride he's taking us on. In a recent interview, Prashanth Neel spoke about how Yash's greed to own every inch of the frame attracted the former to casting the latter in his opus. There are no arguments about that observation from us here. Yash OWNS the screen. It's not the sets, the CGI, the big cars, or the bigger guns that kept me hooked to the screen. The man operating in this environment was the biggest attraction. The beard, the hair, the downright gorgeous suits and that languid walk drunk on confidence are all iconic for a reason. It is a spellbinding performance with a paper-thin character that spouts atrociously cheesy dialogue.

We can't bring ourselves to deliver such high praise for the myriad of other characters across the film. Srinidhi Shetty, her character's actions, and her romance with Rocky deserve individual essays dissecting the many issues bursting at the seams. Reena Desai sticks out like a well-manicured thumb in an arm full of bruises and blood. It is a poorly-written character, and one of the film's biggest failures.

Sanjay Dutt does his part as Adheera and brings adequate menace to his role. His scenes of epicness work as well as Rocky's do. The film's schizophrenic editing loses its purpose and hits overdrive when trying to cover for his physical limitations in his lone fight scene. Raveena Tandon brings gravitas to her time in the sun, and is believable as a no-nonsense wielder of power. A little more time spent with her character would have had her act as the other side of the coin to Rocky. But the film has no time for that, and we have no time to talk about every character actor in the movie.

People are flocking to cinemas to watch Rocky Bhai. DOP Bhuvan Gowda and composer Ravi Basrur know and understand this fact. The color palette is unappealing, and the music is loud beyond reason, but there is a purpose to this madness. Every bit of their effort makes Rocky larger than life. There isn't a shred of shame or doubt associated with them doing it. The ear-shattering score and the awe-inspiring visuals are the very definitions of the phrase "a bit too much", and they don't care about cooling off.

And that is what left me not wanting to leave my seat as the credits faded to a black screen. The beating heart at the centre is not in the script but in the blood, sweat and tears of Yash, Prashanth Neel, Bhuvan Gowda, Ravi Basrur and their massive crew. While Garuda, Narachi, Adheera, Ramika Sen and so many other aspects of these films are "inspired" by works before them, Rocky is a true one-of-a-kind creation.

That immense personal touch into making that character a man, a myth and a legend is what keeps me coming back for more. As a boy from Bangalore, a Kannada film taking the world by storm is a sight to behold. 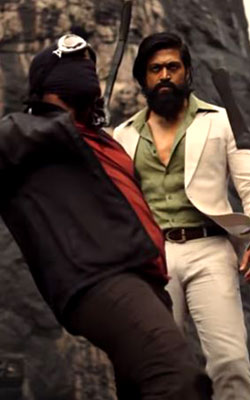 ADVERTISEMENT
This page was tagged for
K.G.F. Chapter 2 telugu movie
K.G.F. Chapter 2 reviews
release date
Yash, Sanjay Dutt
theatres list
Follow @fullhyderabad
Follow fullhyd.com on
About Hyderabad
The Hyderabad Community
Improve fullhyd.com
More
Our Other Local Guides
Our other sites
© Copyright 1999-2009 LRR Technologies (Hyderabad), Pvt Ltd. All rights reserved. fullhyd, fullhyderabad, Welcome To The Neighbourhood are trademarks of LRR Technologies (Hyderabad) Pvt Ltd. The textual, graphic, audio and audiovisual material in this site is protected by copyright law. You may not copy, distribute, or use this material except as necessary for your personal, non-commercial use. Any trademarks are the properties of their respective owners. More on Hyderabad, India. Jobs in Hyderabad.