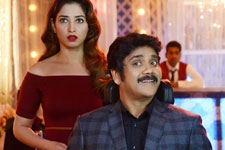 Ravi Kandala / fullhyd.com
EDITOR RATING
8.0
Performances
Script
Music/Soundtrack
Visuals
8.0
8.0
8.0
8.0
Suggestions
Can watch again
Yes
Good for kids
Yes
Good for dates
Yes
Wait for OTT
No
It is with a certain apprehension that we approach movies with some hype around them. Years of reviewing movies does that to you. Hearing the cast and crew of every such movie talk about how utterly ground-breaking their latest work is does that to you. And watching one big movie after the other bite the dust does that to you.

So it was with some trepidation that we approached Oopiri. Nagarjuna in a wheelchair, a trailer that looked classy and tried slightly hard to be emotional, and a director who's had a mixed track record so far didn't really inspire confidence. But boy, are we glad to be proved wrong.

Oopiri, a remake of a French film called The Intouchables, starts off on a couple of slightly false notes, but about twenty minutes in, you're drawn in to the world of Vikram (Nagarjuna), a quadriplegic who's paralysed neck down. He's looking for a caretaker, and the usual two-minute comedy scene about the prospective candidates follows. And then Srinu (Karthi) comes in.

A ruffian who's been released from jail on parole, Srinu's only motivation to do the job is that it can get the court to strike off the case against him. And on day one, he does not want to do half the things he's told (like giving a bath to Vikram, dressing him up, feeding him etc.), leading to a less-than-perfect start. Srinu also believes that money is the key to happiness. Vikram, on the other hand, has all the money a man can need and then some, but is unhappy.

How these two unlikely souls strike a friendship and how Srinu's unconventional methods help Vikram rediscover himself forms the rest of Oopiri. And it is an exhilarating journey to say the least. Vamsi Paidipalli, who has so far made commercially-oriented action films, takes a superbly emotional tale and directs it with a light and assured hand. In spite of being a film about a man who's completely paralysed, Oopiri rarely descends into heavy-handed sentimentality. Even towards the end when Srinu visits Vikram after a while and sees him with a full beard, there are no tears and anxious dialogues about what he's done to himself - Srinu just laughs and comments that Vikram's become a Majnu, and you laugh, too.

Both Srinu's transformation from a reluctant caretaker to namesake brother and Vikram's rediscovery of his happiness take a while, but when they happen, you do not want it to end. The characters are wonderfully written - you cry with them, you laugh with them, you dance with them, and you root for them. Vamsi's definitely set the bar high for himself with this movie, and it'll be interesting to see what he does next.

There are certain actors who should just portray opulent and classy people, and Nagarjuna is one of them. We had the same thought when we saw Manam, and Oopiri reinforces the theory. He is such a treat when he is surrounded by his Bentleys and BMWs and appears on screen wearing all the designer threads. This is a role that required him to emote only with his eyes, and he does wonderfully well.

However, the true revelation is Karthi. He is simply splendid, and plays the perfect foil to Nagarjuna's wheelchair-bound character with his wisecracks. His track with Tamannah feels slightly exaggerated, especially because Vamsi chooses to showcase Tamannah in all her alabaster glory. That this girl would even fall for this guy is difficult to believe, but it is to Karthi's credit that you're rooting for him to win her. Prakash Raj does well, too, but you knew that.

Technically, the film is brilliant. P S Vinod shoots the film beautifully - Paris, Hyderabad or Vizag, every frame looks rich. PVP has spent a lot of money on this movie, and it shows. The music, by Gopi Sundar, is good, too - you might not put these songs on loop, but they play out well in the background. If we really had to pick flaws, we'd say that the film could have done with a slightly lesser runtime, but we'll not do that this time. Oopiri has enough juice to last its full 158 minutes.

It has been a while since the audience in Prasads clapped after a movie. Today, once the morning show ended, the clapping started slowly, but it increased in intensity and took a while to stop. Go book your tickets for Oopiri - this one's a must watch.
Share. Save. Connect.
Tweet
OOPIRI (2016) SNAPSHOT 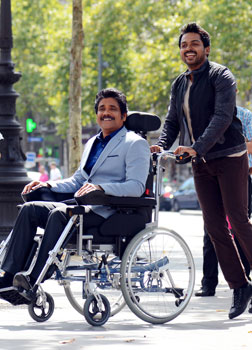 ADVERTISEMENT
This page was tagged for
Oopiri (2016) telugu movie
Oopiri (2016) reviews
release date
Nagarjuna, Karthi
theatres list
Follow @fullhyderabad
Follow fullhyd.com on
About Hyderabad
The Hyderabad Community
Improve fullhyd.com
More
Our Other Local Guides
Our other sites
© Copyright 1999-2009 LRR Technologies (Hyderabad), Pvt Ltd. All rights reserved. fullhyd, fullhyderabad, Welcome To The Neighbourhood are trademarks of LRR Technologies (Hyderabad) Pvt Ltd. The textual, graphic, audio and audiovisual material in this site is protected by copyright law. You may not copy, distribute, or use this material except as necessary for your personal, non-commercial use. Any trademarks are the properties of their respective owners. More on Hyderabad, India. Jobs in Hyderabad.