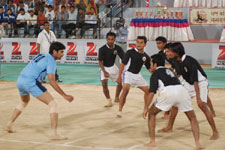 Nupur Barua / fullhyd.com
EDITOR RATING
5.0
Performances
Script
Music/Soundtrack
Visuals
6.0
4.0
5.0
6.0
Suggestions
Can watch again
No
Good for kids
No
Good for dates
Yes
Wait for OTT
Yes
Badlapur Boys, not to be confused with the upcoming Varun Dhawan-starrer Badlapur, is about a few boys and kabaddi. This is, however, not your usual sports film, in that it concentrates not just on the game, but also on social issues and the importance of relationships within a team. Given that celebrities are now endorsing leagues for this sport, with an attempt to revive national pride, this movie could not been released at a better time.

It all begins with the scarcity of water and other infrastructure in this village in Uttar Pradesh. One man in particular is hell-bent on getting the government to listen to him. When he is ignored time and again, he just sets himself on fire, as he threatened, so that the problems of his village can come to light.

Unfortunately for his family and the rest of the village, nobody gives a damn. The dead man leaves behind a son with the stigma of being a crazy idiot's offspring. Life is not very easy. And when the son grows up, he is determined to be the change that his father wanted to be.

This village has this boy and a few others, who, when they are not whiling away time, are involved in a game of kabaddi. They play with unrestrained zeal, and soon, they realise that the sport may just become a means to ending their problems, if they can just showcase their talent to the rest of the world. Of course, they will play because of their love for kabaddi, but it will result in their stating that they, too, are entitled to better living. And they have a coach (Annu Kapoor) who will lead them to fame and glory, or so they hope.

It is a surprisingly simple story, that doesn't try too hard to become a commentary on the haves and the have-nots. Then again, it IS a commentary of sorts - the class system in this country has ensured that the lesser privileged do not receive their due, because corruption and indifference are so deeply ingrained in the lives of the leaders and bureaucrats. It is a novel way of telling a familiar story of underdogs becoming heroes, with sport as the device to make themselves heard.

However, the script lacks finesse. The characters are too stereotypical, and, even worse, one-dimensional. The mother, for example, is a victim of self-pity, and cannot stop howling in misery. The villagers are either very naïve or very conniving and/or hurtful. In an effort to oversimplify the text, perhaps, the writer is superficial with the plot points and sequence of build-ups, making the film predictable and rather lengthy - you already know what the outcome will be, you just want people to hurry up and get there. Kabaddi, thankfully, is not just the backdrop, and some of the sequences are almost Lagaan-ish in nature.

The romance aspect is a bit too superfluous, and pretty dull in a way. The humour in the dialogues is virtually non-existent, because the dialogues ARE slightly heavy and elaborate. While the theme of the importance of unity and pride is quite obvious, there are times when things become absurdly melodramatic, only to revert to a simpler plot line again.

Most of the actors are new, and the protagonist, played by Nishshan, is present in almost every sequence. He does a good job of being the broody and sincere young rebel, of sorts. But the limelight, of course, is hogged by the veteran Annu Kapoor. He plays his part with admirable gusto. The supporting actors are decent, though Kishori Shahane's constant whining may get a bit deafening.

The production and costume designs are clichéd, although it helps in this movie. The music is appropriately placed in the background, and comes your notice only when it needs to. The editing is efficient, but the dragging screenplay makes it seem like the editor has not done his/her job.

Badlapur Boys is a film with its heart in the right place. The presentation is somewhat amateurish, true, but you will find yourself rooting for the villagers, whose only demand is water. This film is worth a watch, if only to appreciate how easy our own lives are.
Share. Save. Connect.
Tweet
BADLAPUR BOYS SNAPSHOT 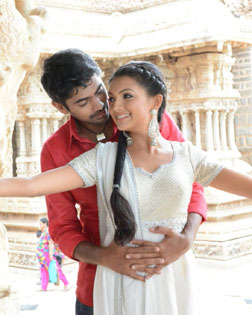 ADVERTISEMENT
This page was tagged for
Badlapur Boys hindi movie
Badlapur Boys reviews
release date
Shashank Udapurkar, Annu Kapoor
theatres list
Follow @fullhyderabad
Follow fullhyd.com on
About Hyderabad
The Hyderabad Community
Improve fullhyd.com
More
Our Other Local Guides
Our other sites
© Copyright 1999-2009 LRR Technologies (Hyderabad), Pvt Ltd. All rights reserved. fullhyd, fullhyderabad, Welcome To The Neighbourhood are trademarks of LRR Technologies (Hyderabad) Pvt Ltd. The textual, graphic, audio and audiovisual material in this site is protected by copyright law. You may not copy, distribute, or use this material except as necessary for your personal, non-commercial use. Any trademarks are the properties of their respective owners. More on Hyderabad, India. Jobs in Hyderabad.