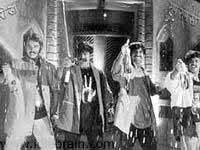 Kalyan Achanta / fullhyd.com
EDITOR RATING
3.0
Performances
Script
Music/Soundtrack
Visuals
NA
NA
NA
NA
Suggestions
Can watch again
NA
Good for kids
NA
Good for dates
NA
Wait for OTT
NA
Kitne aadmi the? Sardar, chaar. That should normally be enough warning - even the most open-minded among us have had enough of Sholay spoofs. This one is worse - it isn't even a spoof, it's nearly a remake. The issue for introspection is then simple - do you want to watch any remake of Sholay? If there is still any doubt left, then just look at the cast.

Chiranjeevulu is a film about four youngsters who land up in a village accidentally, and then fight out the big bad man of the village. The plot revolves around a village that has Nagendra (Nagendra Babu) as the president and Satya Murthy as his rival. Satya Murthy is the villain, and is envious of Nagendra for all the goodwill he has of the villagers.

Now Radha, the daughter of Nagendra, and Anand, the son of Satya Murthy, are in love with each other (yes, you knew it!). Nagendra supports the lovers, and, in trying to unite them, is killed by Satya Murthy, who becomes the president himself now.

Enter Charan (Ravi Teja), Giri (Bramhaji), Chanti (Shivaji) and Kiran (Sijju), four friends who are being chased by both the people and the police. In an attempt to flee, they board a train and reach an unidentified destination (to them, that is - we already know it so well). They kind of like the countryside air, and decide to chill out at here for a few days, but fall into trouble caused by the Big Bad Man. They are rescued by Lakshmi, the widow of Nagendra, and become her adopted children. And of course, they will avenge her trauma.

If there wasn't enough drama already, a flashback tells you that Giri and Chanti are victims of cancer and the other two are accused of a murder each that they can defend. The comedy by Bramhanandam and a couple of others fails to evoke any laughter, but the script deserves most of the blame. Sanghavi in an insignificant role as the lover of Charan does not create an impact either.

The music and lyrics will grow on you if you watch the film enough times. Perhaps even the film will. Your threshold for tolerance surely will.
Share. Save. Connect.
Tweet
CHIRANJEEVULU SNAPSHOT

ADVERTISEMENT
This page was tagged for
chiranjeevulu old pic.songs
chiranjeevulu old movie songs
Chiranjeevulu telugu movie
Chiranjeevulu reviews
release date
Follow @fullhyderabad
Follow fullhyd.com on
About Hyderabad
The Hyderabad Community
Improve fullhyd.com
More
Our Other Local Guides
Our other sites
© Copyright 1999-2009 LRR Technologies (Hyderabad), Pvt Ltd. All rights reserved. fullhyd, fullhyderabad, Welcome To The Neighbourhood are trademarks of LRR Technologies (Hyderabad) Pvt Ltd. The textual, graphic, audio and audiovisual material in this site is protected by copyright law. You may not copy, distribute, or use this material except as necessary for your personal, non-commercial use. Any trademarks are the properties of their respective owners. More on Hyderabad, India. Jobs in Hyderabad.