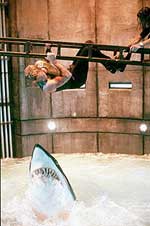 Feroz Hassan / fullhyd.com
EDITOR RATING
3.0
Performances
Script
Music/Soundtrack
Visuals
NA
NA
NA
NA
Suggestions
Can watch again
NA
Good for kids
NA
Good for dates
NA
Wait to rent it
NA
Moviemaking is getting easier on the brain than it is on the pocket. The same is true of watching 'em. You don't have to think anymore. Even if jargon is used, like in Deep Blue Sea, it is never meant to be understood. If it were to be understood, you wouldn't continue to sit in your seat. Consider this: a pack of whales have their intelligence genetically enlarged by a group of scientists, and the fish don't like it.

The team's mission is to find a cure for Alzheimer's disease, and they are working on sharks' brains for it. It doesn't take 'em long to discover that they were on the wrong ones. By the looks of it, the vaccination received by the sharks worked as appetizers. One by one, the cast members are reduced to fish food.

Russell Franklin (Samuel L Jackson), the head of a pharmaceutical company, has been coaxed into funding the project. He dies as soon after he has finished outlining the lessons of his experience. You see, he had just survived an avalanche. It didn't prepare him for this one. Did it? It is inevitable that you wonder what Jackson had on his mind while taking up this movie. He needs to do one with Tarantino before he makes up for this one.

As it is, the rest of the cast is on the run. Carter Blake (Thomas Jane) is the intrepid fishkeeper, who finds the job a li'l too easy. Well, he does get to have a change. Dr. Susan McAlester (Saffron Burrows) finds her dreams of discovering a cure for the disease that killed her father, drowned and then swallowed by the sharks.

The movie couldn't have been more predictable after the first few minutes. You can straight away predict the survivors in this movie. But one thing you cannot be sure of is retaining your senses. The sharks seem funny whenever they are about to gulp down another morsel! As for the cast, they themselves are to be blamed for looking as pathetic as they do. How else did they expect to turn out in this watery fiasco?

And what did Renny Harlin think he was making? Another Jaws? Well, he couldn't have been more off the mark. He is reputed to have directed quite a few duds on an astronomical scale. I thank my stars that I haven't heard of them.

ADVERTISEMENT
This page was tagged for
oh my friend hindi dubbed movie 16
hindi hd baabarr movies
Deep blue sea 3 full movie in hindi dubbing download
Deep blue sea 3full movie hindi download hd
Deep blue sea 3full movie download hindi
Follow @fullhyderabad
Follow fullhyd.com on
About Hyderabad
The Hyderabad Community
Improve fullhyd.com
More
Our Other Local Guides
Our other sites
© Copyright 1999-2009 LRR Technologies (Hyderabad), Pvt Ltd. All rights reserved. fullhyd, fullhyderabad, Welcome To The Neighbourhood are trademarks of LRR Technologies (Hyderabad) Pvt Ltd. The textual, graphic, audio and audiovisual material in this site is protected by copyright law. You may not copy, distribute, or use this material except as necessary for your personal, non-commercial use. Any trademarks are the properties of their respective owners. More on Hyderabad, India. Jobs in Hyderabad.