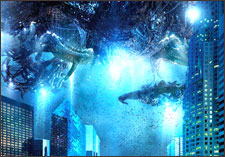 Deepa Garimella / fullhyd.com
EDITOR RATING
5.0
Performances
Script
Music/Soundtrack
Visuals
6.0
3.0
6.0
7.0
Suggestions
Can watch again
No
Good for kids
No
Good for dates
No
Wait for OTT
Yes
The Americans' "they are out to get us" paranoia takes to some of the weirdest heights ever, in Skyline. The film is a package of easy thrills for the creature movie buff, and as airheaded as it gets, without a semblance of substance.

There is an alien contraption hanging above the city of Los Angeles, that spews out brilliant blue lights. Each of these is actually a different machine/being that snoops into homes and apartments, swallows humans, and oozes black gooey fluid while unhinging their brains and eating them.

This unheard-of phenomenon greets a bunch of yuppies who've partied to exhaustion the previous night at Terry's (Donald Faison) expansive condo. Terry is in show-business, and has invited his friend Jarrod (Eric Balfour) and his girlfriend Elaine (Scottie Thompson) over.

No one understands what's happening, but everyone's thoroughly terrified. Help of any kind proves impotent, as even the Army's reinforcements can't tame the extra-terrestrial horror. The radiation, meanwhile, plays havoc with victims who haven't disappeared into oblivion - for example, Jarrod has not been sucked into the alien light but has slowly developed superhuman strength.

The spider-like machines chase everyone out of corners like a pest control drive, and there's a lot of screaming, wailing, helpless disappearances and large-scale destruction of the city.

That, basically, is the summary of Skyline. There's absolutely no explanation for what exactly is happening, and who the intruders are, and neither is there a single human triumph throughout the movie.

Sometimes you think it's a foreign country waging war, and sometimes you wonder if it's a mutant creature that has gone horribly wrong, because the alien thingamajig looks and behaves both like a beast and a machine. But reasoning and logic is non-existent in Skyline - it's just one nebulous episode of powerlessness against an unknown "them".

Some dull drama accompanies all the horror, with Jarrod beginning to chart out his career plans, Elaine announcing she's pregnant, and Terry discovered to be two-timing his woman. It's all, however, something to take up space in the middle of the action.

The special effects are good, and are the only thing this movie has going for it. The chase sequences and the machine design look innovative and real, and some of the long-range scenes of a smoking Los Angeles are quite well-done.

On the whole, if you're into alien-beasts chasing and ingesting frightened humans, watch Skyline for a mindless indulgence and nothing else.
Share. Save. Connect.
Tweet
SKYLINE SNAPSHOT

ADVERTISEMENT
This page was tagged for
Skyline english movie
Skyline reviews
release date
Eric Balfour, Scottie Thompson
theatres list
Follow @fullhyderabad
Follow fullhyd.com on
About Hyderabad
The Hyderabad Community
Improve fullhyd.com
More
Our Other Local Guides
Our other sites
© Copyright 1999-2009 LRR Technologies (Hyderabad), Pvt Ltd. All rights reserved. fullhyd, fullhyderabad, Welcome To The Neighbourhood are trademarks of LRR Technologies (Hyderabad) Pvt Ltd. The textual, graphic, audio and audiovisual material in this site is protected by copyright law. You may not copy, distribute, or use this material except as necessary for your personal, non-commercial use. Any trademarks are the properties of their respective owners. More on Hyderabad, India. Jobs in Hyderabad.