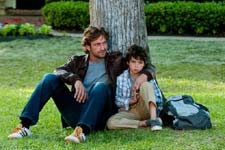 All of those things are, in all probability, more engrossing than the movie we're about to review.

But, first things first. What in the name of Butler's heavenly hiney are Jessica Biel, Catherine Zeta-Jones, Uma Thurman and Judy Greer doing in a story that rightfully belongs on a bookshelf amid titles like "Italian Billionaire's Ruthless Revenge" and "The Billionaire's Blackmailed Bride"?

We get the bit about Butler's hiney, of course. That, and the nummy Scottish brogue, are presumably what the producers have put their money on. They definitely haven't bothered with much else, especially not the story, which goes something like this.

George Stryther (Gerard Butler) is a down-on-his-luck soccer star who's looking for a job as a sports newscaster. Since he's in the neighbourhood, he figured he might as well get to know his son and take a shot at winning back his ex-wife (Jessica Biel), both of whom he alienated by his will-o-the-wisp attitude. With this in mind, he ends up as coach for the kids' team.

Soon, though, his endeavours at turning good are being trampled all over by hot, inexplicably desperate soccer moms (Catherine Zeta-Jones, Uma Thurman, Judy Greer)!

But, since it's a sexist rom-com, he obviously sleeps around with all of them, only to get back with his ex-wife. (Why?!? Catherine Zeta-Jones in so much hotter than Biel's whiny character!)

All the roles, including those of Butler, Biel and Zeta-Jones, are hot off of the Mills & Boons flat- character assembly line. The only thing that makes the movie worth watching is Butler's rapport with the adorable little imp who plays his son. And, of course, the impeccable cinematography is a treat to the eyes.

Playing For Keeps is the kind of fare that a woman undergoing a break-up would wallow over with a box of tissues and chocolate ice cream by her side. Think that's a cliché? It is, but not as much of one as this movie is.
Share. Save. Connect.
Tweet
PLAYING FOR KEEPS SNAPSHOT 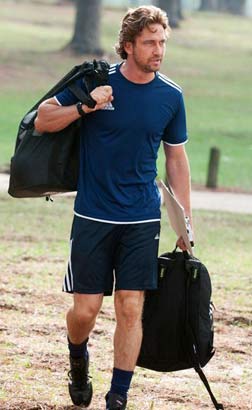 ADVERTISEMENT
This page was tagged for
Playing For Keeps english movie
Playing For Keeps reviews
release date
Gerard Butler, Jessica Biel
theatres list
Follow @fullhyderabad
Follow fullhyd.com on
About Hyderabad
The Hyderabad Community
Improve fullhyd.com
More
Our Other Local Guides
Our other sites
© Copyright 1999-2009 LRR Technologies (Hyderabad), Pvt Ltd. All rights reserved. fullhyd, fullhyderabad, Welcome To The Neighbourhood are trademarks of LRR Technologies (Hyderabad) Pvt Ltd. The textual, graphic, audio and audiovisual material in this site is protected by copyright law. You may not copy, distribute, or use this material except as necessary for your personal, non-commercial use. Any trademarks are the properties of their respective owners. More on Hyderabad, India. Jobs in Hyderabad.