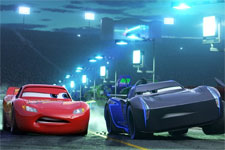 Vaishnavi Kulkarni / fullhyd.com
EDITOR RATING
8.0
Performances
Script
Music/Soundtrack
Visuals
8.0
8.5
7.5
8.5
Suggestions
Can watch again
Yes
Good for kids
Yes
Good for dates
No
Wait for OTT
No
With the first Cars movie, Pixar introduced a generation of little boys and girls (along with their parents) to a world where cars do everything human characters can, including stealing your hearts away. Now, as the third part of the franchise races into theatres a decade later with Walt Disney Pictures added to its list of sponsors, the now grown-up fans are treated to two hours of nostalgia-laced entertainment, with plenty of hilarity for the young ones, too.

Lightning McQueen (voiced by Owen Wilson) is back, firing on all cylinders - he is older, but not particularly wiser. The other familiar bonnets are on the track, too - Mater (voiced by Larry the Cable Guy) and Sally (voiced by Bonnie Hunt) are there to cheer Lightning on. Unfortunately, McQueen is getting rusty. No longer the shiny new car that he used to be, McQueen will need a lot more than mere cheering to defeat Jackson Storm (Armie Hammer), the cocky rookie with a top speed of 213 mph who quickly rear-ends McQueen out of the limelight to take his place.

For a children's animation flick, the plot is quite mature and well thought-out. Lightning finds himself relating to his mentor, the late Doc Hudson, more and more as history begins to repeat itself. When he starts training for what could be the final race of his career under the care of his new sponsor, Mr Sterling (Nathan Fillion), he makes his acquaintance with Sterling's racers' trainer, Cruz Ramirez (Cristela Alonzo). Cruz is bright, vivacious and enthusiastic, and she idolises McQueen in all his ancient (no offense, Lightning) glory.

As McQueen and his new trainer navigate rocky terrains together in his quest to beat Storm, he learns about the younger car's dreams, hopes and hidden talents, while understanding a few things about his own self along the way, too. Through Demolition Derbies and visits to seasoned veterans like Smokey (Chris Cooper) who make even McQueen feel like a novice again, McQueen gains a fresh perspective as he steers into his former mentor's tire tracks, and slowly comes to realise that speeding on a race track isn't the only fulfilling option out there.

The movie ends on a satisfying note that wins cheers from the audience, and gives a heart-warming message - that girls, even the ones which are anthropomorphic cars, can live their dreams and leave others in the dust (of their tires, in this movie). For a franchise which has been mostly male-centric up to this point, a character that the little girls out there can relate to (metal body and IC engine aside) is a welcome addition to the Cars universe.

The student-mentor bond is also well-developed, and brings the story around in a full circle back to the first film. It is a fitting tribute to the late Paul Newman, voice of the late Fabulous Hudson Hornet. The races are intense, with a suitably fast and upbeat background score, and have the children (and some of the adults, too) on the edges of their seats.

The voice cast are well-matched with their parts. Owen Wilson reprises his role as Lightning McQueen, and is as humorous and charming as ever. He succeeds in making his character world-wearier in this instalment, bewildered by the realisation that he is no longer the biggest name in the game. Cristela Alonzo makes you believe it is the car who is talking and not an actor - she makes Cruz sound innocent and full of fresh enthusiasm, but also expresses the sadness, anger and disappointment of her character when the moment calls for it.

Fillion suits his role as the pompous billionaire who thinks a bit too highly of himself, while Armie Hammer makes Jackson Storm a ruthless rival, brimming with confidence and ready to undermine anyone who dares to threaten his position at the top. Chris Cooper is the right fit as the wise, gruff and tough old mentor who can still teach the famous McQueen a thing or two about the sport.

The quality of animation is top-notch, the kind that people have come to expect from Disney-Pixar. It is no mean feat to make CGI vehicles express emotions through solely their eyes and smiles in a way that secures the audience's empathy, but the animators nail it in this one. The tone of the movie is bright, colourful and loud, aimed at keeping the younger viewers enraptured with sleek, flashy cars and cheering crowds, but is also mellowed down with muted shades for the softer, emotional scenes. The 3D effects are not too discernible and could have been better done, but the cinematography, as a whole, does not disappoint.

Cars 3 will not join the ranks of films like Zootopia and Finding Nemo, but it is far from crashing and burning. It may not come first, but it gets you to the finish line, and makes good time.
Share. Save. Connect.
Tweet
CARS 3 (3D) SNAPSHOT 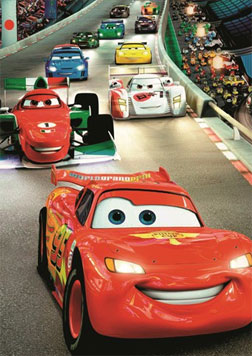 ADVERTISEMENT
This page was tagged for
Cars 3 (3D) english movie
Cars 3 (3D) reviews
release date
Owen Wilson, Cristela Alonzo
theatres list
Follow @fullhyderabad
Follow fullhyd.com on
About Hyderabad
The Hyderabad Community
Improve fullhyd.com
More
Our Other Local Guides
Our other sites
© Copyright 1999-2009 LRR Technologies (Hyderabad), Pvt Ltd. All rights reserved. fullhyd, fullhyderabad, Welcome To The Neighbourhood are trademarks of LRR Technologies (Hyderabad) Pvt Ltd. The textual, graphic, audio and audiovisual material in this site is protected by copyright law. You may not copy, distribute, or use this material except as necessary for your personal, non-commercial use. Any trademarks are the properties of their respective owners. More on Hyderabad, India. Jobs in Hyderabad.