Akhil - The Power Of Jua Review 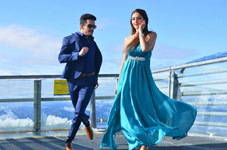 Josh / fullhyd.com
EDITOR RATING
3.5
Performances
Script
Music/Soundtrack
Visuals
5.0
3.0
3.0
8.0
Suggestions
Can watch again
No
Good for kids
Yes
Good for dates
No
Wait for OTT
Yes
Akhil - The Power Of Jua is ostensibly the story of a street fighter named Akhil (Akhil) whose attempts to woo Divya (Sayesha) land him in pursuit of a powerful metal orb called Jua. There are other people who covet this source of power, and it is for Akhil to save the world by making sure it doesn't fall into their hands.

The other story you might be more interested in is the one on marketing. The movie released in 79 theatres in Hyderabad with easily about 400 shows on the day of release. In a two-tier town with four theatres, Akhil released in three. Television channels play teasers and trailers during every break, and the posters of Akhil are plastered all over the place (including ones with water purifiers and vermicelli). There is a strong sentiment in favour of the new lad. Case in point is when this reviewer's mother gently suggested that the review had better be encouraging rather than disparaging.

And you'd think when makers have access to so many resources (material as well as emotional), and they are so invested in launching a career, they'd come up with something at least moderately entertaining. But no, they'd rather make a film which doesn't make you feel anything. Except boredom, that is.

That isn't to fault Akhil. He appears to be a likeable guy and he's surely gone through the requisite training expected of a Tollywood hero. He's jacked-up with abs, can bend and twist his torso and limbs for those intricately choreographed sequences in our songs, and ably executes all the wire-fu stunts which help our films disregard physics.

The only glitch is he is extremely stiff and palpably nervous. This is a common phenomenon in star kid debuts. Like Nagarjuna's other son's debut Josh (this reviewer, a sorry namesake, had nightmares about that tagline "Youth Rockzzz"). Why, Nagarjuna's debut Vikram itself was no great shakes. He kept stiff even until Janaki Ramudu and slowly found his feet in Gitanjali. Some star kids go that way while some others go the unfortunate Abhishek Bachchan route. To Akhil's credit, he seems he'll go his father's route.

So, no, this isn't a denouncement of Akhil, the actor, but rather Akhil, the film. It's an immensely dull film throughout.

The romance is insipid. Sayesha Saigal is no different from the other pretty wide-eyed girls that come south to find careers in being pretty, dancing vigorously, and lip-syncing badly. Her character Divya is supposed to be studious but still believes that like Cambridge, there exist universities called London Bridge, and Howrah Bridge. She's dumb, he's dishonest, and why the leads fall for each other is a mystery that wouldn't interest even the most jobless detectives.

Five years ago, when just the bald patch of Brahmanandam (the train scene in Vedam, if you recollect) could send the audience into raptures, we wouldn't have believed you if you told us that one day we'd get tired of him. In this film, as Johnson Johnson, Brahmanandam soullessly repeats the same shtick he's been doing over the years. People still laughed, but wearily. In time, it appears, they may stop laughing altogether.

Rajendra Prasad and the lady who play his mother steal the scenes they are in but that's barely any at all. Vennela Kishore, Saptagiri and Jaya Prakash Reddy all try. Sometimes successfully but mostly otherwise. The rest of the acting department, which is basically the villains Mahesh Manjrekar, an African and a Russian, scowl like they aren't getting paid on time, and barely register.

If the story is bad, the acting is sad and the script is malnourished, you'd wonder, like we did, where all the money and V V Vinayak's talents went. Vinayak is by no means an incompetent director. With credentials like Tagore, Lakshmi, and the thumping debut Aadi, one can't really question his capabilities. Well, what did he do in Akhil, then?

What he did was to craft some good-looking scenes. At this point in his career, he seems to have settled in a comfort zone of mounting very glitzy frames (with cinematographer Amol Rathod), and staging well-choreographed fight sequences. Practically all of the film looks slick, and the fights scream the brilliance of the the action choreographer. If you were to watch the movie in a sedated mode without full sentience, you'd probably be very impressed with it. Alas, we can't be satisfied with that.

Akhil reminds you of the non-stick tawas sold on television. All the incessant advertising and the beaming faces of people in them telling you just how awesome these tawas are. When you finally get one, your dosa invariably sticks to the damn pan. You end up wishing they spent money on making a better product rather on selling it.
Share. Save. Connect.
Tweet
AKHIL - THE POWER... SNAPSHOT
AKHIL - THE POWER OF JUA SNAPSHOT 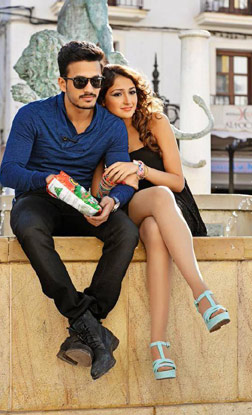 ADVERTISEMENT
This page was tagged for
akhil the power of jua
akhil the power of jua telugu full movie
Akhil - The Power Of Jua telugu movie
Akhil - The Power Of Jua reviews
release date
Follow @fullhyderabad
Follow fullhyd.com on
About Hyderabad
The Hyderabad Community
Improve fullhyd.com
More
Our Other Local Guides
Our other sites
© Copyright 1999-2009 LRR Technologies (Hyderabad), Pvt Ltd. All rights reserved. fullhyd, fullhyderabad, Welcome To The Neighbourhood are trademarks of LRR Technologies (Hyderabad) Pvt Ltd. The textual, graphic, audio and audiovisual material in this site is protected by copyright law. You may not copy, distribute, or use this material except as necessary for your personal, non-commercial use. Any trademarks are the properties of their respective owners. More on Hyderabad, India. Jobs in Hyderabad.