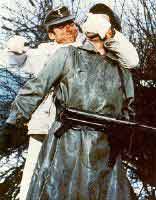 Smriti Kashyap / fullhyd.com
EDITOR RATING
8.0
Performances
Script
Music/Soundtrack
Visuals
NA
NA
NA
NA
Suggestions
Can watch again
NA
Good for kids
NA
Good for dates
NA
Wait to rent it
NA
When it comes to strapping chutes and grimacing a mean grimace, no one does it better than good old three-words-in-a-movie Clint Eastwood. Dispensing kegs of dynamite like fertilizer in cabbage fields or riding the tops of cable cars like a surfer bum, Eastwood is in so many ways a man's man - no sirree, he is THE man! Move over Richard Burton, and let the flint-Clint light the fire!

And this is just the beginning. One of the best action flicks ever with two of the hottest hombres of the yesteryears, Where Eagles Dare is a class act, and if you didn't have your dose of cinema in the right amounts whilst you were growing out of them wee nappies, then this is your chance to catch up on the head honcho of war flicks.

Based on the Alistair MacLean novel by the same name, this movie traces the escapades of the Allied agents as they are sent in to rescue an American General held captive by the Germans. General Carnaby is held in the impenetrable fortress of Schalus Adler by the Germans in an attempt to get him to croak about some secret plans (no, not the ones involving Kisan squash and the noisy hyperactive kid).

Double agent Smith (Richard Burton) and an American Agent Lt Schaffer (Eastwood) are called in to bail the General out. But the emphasis being on the word 'impenetrable', this operation doesn't exactly fit the bill of a 'smash and grab' routine. Assembling a motley crew of other agents, Smith and Schaffer set out on their mission.

Just like the good doctor needs a nice nurse to dab his forehead once in while with a swab, lady agent Mary Ellison (Mary Ure) comes in. Thus, with all the fraus and frauleins in, the team is in place.

With no room for the Heimlich maneuver in this operation, the agents soon mole their way into the base camp and the area where the General is being held. Once 15 feet in the vicinity of the general, we are drawn into a maze of intrigue, crossings and double crossings that can put an entire fleet of trains to shame.

Teeming with spies, agents, double agents and German accents coupled with more moles and holes than a crate of the finest alpine cheese, the plot soon seems to assume a complex dimension, but if you stop chewing your popcorn for a second and halt that gulping sound, I'm sure you'll figure out the unbelievable twist.

The tale is more complicated than grinding Java beans for breakfast or figuring out the velocity of a spinning top, and the 15 minute portion of the flick where Richard Burton gets to exercise his vocal chords to let you in into the plot is a piece of sheer brilliance. The movie continues to thrill as you huddle around the edge of your seat watching the agents make do with meaninglessly obsolete weapons of war - a couple of kegs of dynamite and a yard of rope! The background score consisting of more than one single harp and drum sets the whole mood for the film, and ebbs and flows with the burning bridges, cable cars and bikes.

With some great action sequences on inane places like the tops of cable cars, you end up chewing your hand right down till your wrists - will Clint make it through the struggle? Hang on Clint! Just grab the damn roof - that's it, now pull yourself up - noooooooo - CLLLLIIIIIIIIIIIINNNNNNNNTTTTTTTT!!!

See Where Eagles Dare full details
WHERE EAGLES DARE USER REVIEWS
1 - 1 OF 1 COMMENTS
POSITIVE  |  NEGATIVE |  NEWEST  |  OLDEST  |  MOST HELPFUL  |  LEAST HELPFUL
USER RATING
9.5
4 USERS
Performances
Script
Music/Soundtrack
Visuals
NA
NA
NA
NA
Can watch again - NA
Good for kids - NA
Good for dates - NA
Wait to rent it - NA
Kiran Nadella on 16th Apr 2002, 1:26pm | Permalink
Back when I was a teenage Alistair MacLean fan, I remember staying up all night reading this novel, which was actually adpated from the film (MacLean wrote the movie first!). It was probably MacLean's most exciting book: non-stop intrigue, obfuscation and action, and it is a replica of the movie. So that tells you what to expect here. Plus, we have the added pleasure of watching the screen's oddest couple of all time in Richard Burton and Clint Eastwood. Burton, in an action movie for a major change, does a great job with his fight scenes, and carries the twists and turns of the plot with aplomb. Eastwood, little more than a hired assassin here, is at his steely and cool best, straight out of Leone's Italian westerns. Throw in a couple of sexy female agents, incredible stunts on a cable car, plenty of machine gun fire, explosions, car chases, and a stirring, heart-pounding music score, and you have the perfect Saturday afternoon popcorn movie.


What more could you ask for? You'll be on the edge of your seat the whole time, continually asking, "What the heck's really going on here?"

ADVERTISEMENT
This page was tagged for
Where Eagles Dare english movie
Where Eagles Dare reviews
release date
Richard Burton, Clint Eastwood
theatres list
Follow @fullhyderabad
Follow fullhyd.com on
About Hyderabad
The Hyderabad Community
Improve fullhyd.com
More
Our Other Local Guides
Our other sites
© Copyright 1999-2009 LRR Technologies (Hyderabad), Pvt Ltd. All rights reserved. fullhyd, fullhyderabad, Welcome To The Neighbourhood are trademarks of LRR Technologies (Hyderabad) Pvt Ltd. The textual, graphic, audio and audiovisual material in this site is protected by copyright law. You may not copy, distribute, or use this material except as necessary for your personal, non-commercial use. Any trademarks are the properties of their respective owners. More on Hyderabad, India. Jobs in Hyderabad.