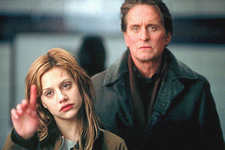 Siddhartha Kongara / fullhyd.com
EDITOR RATING
3.0
Performances
Script
Music/Soundtrack
Visuals
NA
NA
NA
NA
Suggestions
Can watch again
NA
Good for kids
NA
Good for dates
NA
Wait to rent it
NA
If you're wondering what that title is all about, it is actually a fervent plea to you not to give vent to your true feelings after coming out of the theater. Don't Say A Word is based on the novel of the same name by Andrew Klaven, and is being touted as a psychological crime thriller. And it is one, too - just the way Laloo and Amma are apostles of personal integrity. Other than that, it is mostly a waste of time, money and effort - a rehash of a hundred other weirdo movies about mind-cracking that you might have seen over the years.

Nathan Conrad (Michael Douglas) is an ideal father and a big-shot 200-an-hour psychiatrist who specializes in treating teenagers with problems. He is called in to the Government Psychiatry Hospital to help Elizabeth Burrows (Brittany Murphy), an 18-year-old girl who has just carved up a guy with her bare hands. The next morning, his daughter is kidnapped by gangsters who want him to delve into Elizabeth's mind to find out a mysterious number.

It turns out that Elizabeth witnessed her father being murdered by these thugs for being naughty and not sharing the loot with his mates. Having got caught in the act, they've just come out of jail, and are eager to find their hard-earned money. Now Elizabeth hid the stolen diamond years ago in her father's unmarked grave in a mass graveyard for John Doe's. The number of the grave is what the baddies, led by Patrick Koster (Sean Bean), are after. The gang's composition is the typical one dumb guy with long hair, one black guy with verbal diarrhea and one silent chap.

Elizabeth's actual psychiatric illnesses are buried among several other illnesses that she has made up - a smart ploy to stay in high security mental institutions where she is safe from the baddies (and also one of the very few smart things in the entire movie). Obviously, Conrad is the only doctor who is able to see through her charade, and is able to do so from only 2 minutes' perusal of her case history.

Meanwhile, a homicide cop, Detective Cassidy (Jennifer Esposito), is on the track of the thugs. She keeps arriving at the scene of action just a little late each time, and manages to catch up with everyone else only in the climax - and gets shot then. Obviously, by then it is too late.

Other incidental characters include the psychiatrist's wife played by Famke Jenssen (Xenia Onatopp in Golden Eye). Jenssen plays what is probably one of the easiest roles in her career - she lies throughout the movie on a cot with one leg in traction and the other exposed for the benefit of the rather voyeuristic gangsters, who have set up a 24-hour live video feed from the doctor's house to their lair.

Elizabeth, after learning of Conrad's plight, wants to help him, but the number is locked up in the deep recesses of her mind (which is probably where they found this plot, too). So they go over everything the girl went through in order to unlock the number from her mind. When she does reveal it, the final twist is enough to knock the strongest among us senseless.

Neither the plot nor any member of the cast has much of an impression on you, unless you count the dull throbbing sensation at the base of your skull. Michael Douglas looks about 76, and speaks in a dull monotone that reminds you of Gillian Anderson in the X-Files series. The plot has more loose ends than a hydra, and the basic premise is about as sound as George Bush's understanding of how the English language works.

ADVERTISEMENT
This page was tagged for
Don't Say A Word english movie
Don't Say A Word reviews
release date
Michael Douglas, Brittany Murphy
theatres list
Follow @fullhyderabad
Follow fullhyd.com on
About Hyderabad
The Hyderabad Community
Improve fullhyd.com
More
Our Other Local Guides
Our other sites
© Copyright 1999-2009 LRR Technologies (Hyderabad), Pvt Ltd. All rights reserved. fullhyd, fullhyderabad, Welcome To The Neighbourhood are trademarks of LRR Technologies (Hyderabad) Pvt Ltd. The textual, graphic, audio and audiovisual material in this site is protected by copyright law. You may not copy, distribute, or use this material except as necessary for your personal, non-commercial use. Any trademarks are the properties of their respective owners. More on Hyderabad, India. Jobs in Hyderabad.