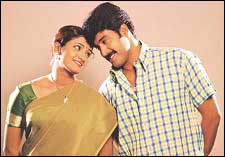 Mithun Verma / fullhyd.com
EDITOR RATING
5.0
Performances
Script
Music/Soundtrack
Visuals
NA
NA
NA
NA
Suggestions
Can watch again
NA
Good for kids
NA
Good for dates
NA
Wait to rent it
NA
The easiest thing in the world is to be judgmental. But sometimes, due to circumstances beyond our reason, we cannot put a finger on why we do not like a certain thing. Perhaps we can put our entire hand on it, or our entire body, or the entire colony we live in, but putting a finger? That can really be challenging. Challenging is also the right way to describe Aanandam...

It challenges the ability of our eyelids to remain open - even if we try to cello-tape them to the back of our heads and even if we try remembering that we've paid to keep our eyes open.

Akash (last seen when eyelids were open) is an ONGC engineer who's on a project in one of our villages. His branch of engineering is in Prying, with a Masters in Stalking. His behavior however doesn't freak out the heroine (Renuka). She's too busy trying to look cute. Actually, too busy trying to look exasperatingly childish, but 'cute' sounds cuter. If there was one thing that you were ever sure of in your life, then it is that Akash and Renuka deserve each other. Even then you're not sure if the punishment is severe enough.

Akash, in his casual subtle way, follows her home one-day. He finds out that she has this humungous family that plays some very interesting games. In fact, all the family ever does is to play games, sing and be happy. This sort of peculiar behavior is far from reality, and is definitely not seen anywhere in real life. But family members like Renuka are also not seen in real life. It is only understood why the family is completely off their screws.

Keeping in tandem with the proceedings, Renuka's dad fixes up her wedding with Akash since Renuka's aunt (Sumalata) has found out all about the hero, and how eligible he is etc. After a brief imagination of the hero that lasts for about 20 hours, he's brought to reality. That he's not the one that Sumalata dug out info about. His dreams are shattered, as the family who loved him like their own son, now, shrugs him off like a dead mosquito.

Akash is greatly enraged at this gross misconduct. He's only dead, not a mosquito! Though occasionally his nose buzzes like one. He's also mad about Renuka's episode. He loved her and she doesn't even care. But he doesn't make a ruckus. He's the quiet types. He's especially the quiet types when there is a bigger star who's supposed to make him meet with the heroine.

Enter JD Chakravarthy. He's Renuka's bro-in-law that the family believes has killed their loved daughter (his wife). But, obviously, the truth is far from that story.

JD finally helps in getting Akash and his girl together. The family also rejoices to have added another new member to their circus.

Plot and execution wise, the movie is atrocious. It's only the comedy track that lifts the movie from the pits. Guys like Sunil, Venu Madhav, Sudhakar, MS. Narayanamurthy and that little kid from Panchatantram (maa vaadi heart la hole…) have truly managed to keep the breathing process of the viewers going with their fantastic work. The comedy track extends even into the 2nd half, keeping us awake there, too. The music can also be called as being funny.

Though the humor is original, it can only drag the flick to the average margin. For the people making their comebacks (Akash, JD Chakravarthy, Sumalata, Nuthan Prasad and Preeti Jhingyani) this not really good news. But this is all the news they're going to get.

Finally, this is a decent watch if all you need in a movie is some humor. Even if some of it was not meant to be funny.

ADVERTISEMENT
This page was tagged for
Aanandamaanandamaaye telugu movie
Aanandamaanandamaaye reviews
release date
Akash, J. D. Chakravarthy
theatres list
Follow @fullhyderabad
Follow fullhyd.com on
About Hyderabad
The Hyderabad Community
Improve fullhyd.com
More
Our Other Local Guides
Our other sites
© Copyright 1999-2009 LRR Technologies (Hyderabad), Pvt Ltd. All rights reserved. fullhyd, fullhyderabad, Welcome To The Neighbourhood are trademarks of LRR Technologies (Hyderabad) Pvt Ltd. The textual, graphic, audio and audiovisual material in this site is protected by copyright law. You may not copy, distribute, or use this material except as necessary for your personal, non-commercial use. Any trademarks are the properties of their respective owners. More on Hyderabad, India. Jobs in Hyderabad.