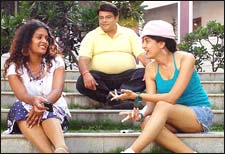 Deepa Garimella / fullhyd.com
EDITOR RATING
6.5
Performances
Script
Music/Soundtrack
Visuals
6.0
7.0
8.0
7.0
Suggestions
Can watch again
Yes
Good for kids
No
Good for dates
Yes
Wait for OTT
No
Shut your eyes and tell us which colour you see. Red means you're disturbed, and yellow means you're feeling good. Scorn all you want, but we bet you'll try it thrice (at least) - twice when chweet-tubby-boy Karthik says so, and once when dusky-hot-girl Kalpana tries it for herself. You'll do it because it's dark inside the theatre anyway, and you're sure no one will see you fall for it. And that's how the massive eye-shutting exercise began at our nearest theatre screening this love story that got named after the Lord of great beginnings.

Plus-sized Karthik (Krishnudu) has come down from Razole to Hyderabad, to look for work. In any other movie, plus-sized would have meant "insert scene involving totally random people on the road calling huge person something rude, e. g. bandoda, and hope it's funny". Here, Vinayakudu behaves like any other movie and tells us how unkind the whole world, including auto-wallahs, is to overweight people. Including a woman he meets on Yahoo Messenger, who is all ready to meet him and then avoids him once she sees he looks nowhere like what she dressed up for.

Luckily, self-esteem is not among Karthik's problems. A plain-spoken, yet-to-learn-the-ways-of-the-city, thick-set Cancerian, Karthik ends up in the same office as that of the Leo-born, hip glam-doll Kalpana (Sonia). Pre-marital sex scandalizes him, she believes in individual choice. He talks about the above mood-testing device, she scoffs. He likes her, she can't stand him (allergy, she says). But they do become friends, and Karthik falls in love with her. Also in the scene are Karthik's friend Altaf, who's hitting on Kalpana's friend Sandy (Poonam Kaur). Meanwhile, Kalpana is seeing this guy her parents fixed her up with, but she breaks up with him eventually.

Romance kind of develops over Salsa classes, bhel and haleem. But before anyone proposes to the other, there's the customary fight, lots of hurt feelings, and Karthik finally trying to jog but fainting in the process, and then ensues a could-have-been-beautiful ending.

To its credit, Vinayakudu is a brave, brave attempt at the unconventional. With all due respects to Krishnudu, here is a fat man playing a fat hero. It is an uncompromisingly cute film, much like its male lead, whose pleasant looks are a huge asset (pun totally unintended). And refreshingly, there are no attempts whatsoever at correcting anyone's personality - the movie believes you're better off loving people for what they are, rather than for what they are or will be after you change them. The pair's onscreen chemistry gets ignited right from their very first frame together, even when she's hating him. Chemistry seems highly unlikely, but it's happening, and audiences love it.

The hitch is that the romance is spoilt by some utterly contrived sequences that supposedly make Kalpana look beyond the pot-belly, and into the kind heart, of the man. They involve a vague sub-plot involving a woman who sleeps around for corporate success, and another totally unconvincing scene where Karthik takes to task a couple of eve-teasers who had troubled Kalpana. Even the proposal scene is way too corny and laboured, and seems like something the makers did in a hurry to wrap up the film.

Sonia has a solid screen presence, and at the risk of another pun, so does Krishnudu. But screen presence is to be differentiated from "skill", and Krishnudu's accented dialogue delivery seems laboured, a lot of times. The supporting cast is okay, and if Poonam Kaur does not tone down on the skin show, she could well be on her way to some B-list offers.

The first song comes in about 55 minutes after the film starts. That's a really long wait. And worth it, too. One happy romantic song, and one intensely romantic remix of Vara Veena later, all you're waiting for is to go home and download this very limited musical collection.

All our friends out there who imagine they're overweight and somehow assume that love isn't in their league, shut your eyes and think yellow. Also, watch Vinayakudu.
Share. Save. Connect.
Tweet
VINAYAKUDU SNAPSHOT

RATING
8
Apps on 17th Dec 2008, 10:10pm | Permalink
Excellent movie. Has the stuff that one looks for in a movie to pass time pleasantly!
All actors fit in their roles and Sonia is rocking.

Imagine this movie has got such a good rating that none got before and thats true.


ramanareddy on 17th Dec 2008, 8:34pm | Permalink
film is very good director is very good
Sacheen R on 9th Dec 2008, 11:14pm | Permalink
Simple and a feel good movie.
RATING
10
Akshay on 6th Dec 2008, 2:10am | Permalink
this movie is AWESOME!!! i saw it twice already and cant wait to see it 2-3 MORE TIMES!!! COmedy is great and so is the performances. Sonia is hot and sexy and Krishnudu is great as the fat guy. Music is very melodious and wins ur heart. THe movie isnt that long [2hr 15min] for a telugu movie. If u havent watched this film yet, get ur ass up and GO WATCH THIS MOVIE!!

RATING
10
The Imtiaz on 23rd Nov 2008, 10:15pm | Permalink
Best performance by Kalpana (Sonia). Karthik (Krishnudu) also did well but missed the track here and there. If there was more Comedy and some appropriate endings for the points they have touched in this movie, this would have been again a great movie with unconventional story. Watch this movie if you have absolute leisure time.

Sonia…for you great career on the cards….Wish You Good Luck!

ADVERTISEMENT
This page was tagged for
Vinayakudu telugu movie
Vinayakudu reviews
release date
Krishnudu, Sonia
theatres list
Follow @fullhyderabad
Follow fullhyd.com on
About Hyderabad
The Hyderabad Community
Improve fullhyd.com
More
Our Other Local Guides
Our other sites
© Copyright 1999-2009 LRR Technologies (Hyderabad), Pvt Ltd. All rights reserved. fullhyd, fullhyderabad, Welcome To The Neighbourhood are trademarks of LRR Technologies (Hyderabad) Pvt Ltd. The textual, graphic, audio and audiovisual material in this site is protected by copyright law. You may not copy, distribute, or use this material except as necessary for your personal, non-commercial use. Any trademarks are the properties of their respective owners. More on Hyderabad, India. Jobs in Hyderabad.