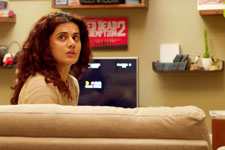 T J Reddy / fullhyd.com
EDITOR RATING
7.0
Performances
Script
Music/Soundtrack
Visuals
8.0
7.0
7.0
8.0
Suggestions
Can watch again
Yes
Good for kids
No
Good for dates
Yes
Wait to rent it
No
Many filmmakers deride modern film reviewers for one simple reason. They say that film criticism has devolved into a morose exercise in interminable nitpicking of a film's plot instead of being a well-written analysis of how emotionally affecting a film's story is.

We here, on this site, agree that the world a movie is set in is mostly devoid of logic. But it is a filmmaker's job is to make that illogical world palatable to an audience for the duration of his/her film by using every ounce of smoke and every mirror, however big or small, at his/her disposal. Keeping an audience gleefully distracted from a story's failing internal logic is the mark of a master storyteller.

So, what are the distractions Game Over brings to the table?

On a night like any other, a woman orders her dinner via Swiggy. Unbeknown to her, a man films her every action from a few feet away. He breathes heavily and walks towards her house, his camera zooming in and out at regular intervals. He breaks into her house drawing little to no attention. He blends himself into her surroundings. He watches. He lurks. He waits. He craves for her to notice his presence. Because he knows that once she does, it is Game Over, indeed.

A year after this incident, we are introduced to video game character design artist Swapna (Taapsee Pannu). As New Year's Day approaches, she finds herself feeling suicidal and mentally unstable to a high degree. She seeks help from her psychiatrist, she confides in her motherly maid Kalamma (Vinodhini Vaidyanathan), and diverts her anxiety by drowning herself in the world of Pac-Man.

However, all this sound and fury result in no tangible change in her mental state. She has experienced loss. She has experienced pain. She is terrified of the fast approaching 1st of January on an annual basis and is mortified by the dark on a daily basis. Unknown to her, she is in for a fight for survival very soon. But why would a suicidal induvial even put up a fight?

All these and many more distractions kept our eyes glued to a film whose basic plot-line can be summed up as "woman comes to terms with and gets over her fears".

The world of Game Over, like the worlds of the endless classic video games it references, makes no logical sense. Ask yourself this: "Why do the ghosts in Pac-Man want to kill Pac-Man?". You don't know and neither do we. An avid gamer amongst us could enlighten us, but that is besides the point once the game has started. We imprint our personality onto that hungry yellow circle that eats dots and we have him run through every nook and corner on the screen to keep him alive and well-fed. Survival is key. Survival is the only salvation. For Swapna, too, survival is the only salvation.

The movie introduces us to a fragile woman whose strength has been robbed. How was it robbed? A few quick cuts tell us a backstory, but the legitimacy of that backstory is open to questioning. Was she a victim of sexual assault, was she a victim of false reporting or was she a victim of an invasion of privacy? If she was a victim of the latter, did she find out something about herself that she didn't know of when she was a participant in the act or is she terrified of the endless peering eyes of the world around her or is it both? The film's scattered retelling of her story allows you to pick your poison based on your own personal fears. Once the character is tuned to your preference, she needs to survive.

From this moment on, director Ashwin Saravanan, cinematographer A Vasanth, composer Ron Ethan Yohann and the film's stunt choreographer take centrestage as they craft a home invasion survival horror film that would make RGV's Kaun sit up and take notice. The sounds are ear-shattering yet eerie, the camerawork changes styles with each new obstacle, the attention to detail and consistency with continuity provided when traversing Swapna's home are commendable, and showing you all this and so much more in a brisk 103 minutes is applause-worthy indeed.

But unlike a classic video game, the movie doesn't show all its cards from minute one. To keep the surprises coming, it adds obstacles after the initial skirmish. It is a betrayal of its story-telling mechanism and a choice oozing with convenience.

But right before you look deeper into many more convenient aspects in the film's structure and its similarities to Michael Haneke's Funny Games and Mike Flanagan's Hush, it distracts you with a pair of stunning performances by Taapsee Pannu and Vinodhini Vaidyanathan. The two ladies carry this film ably as they display comradery and individuality in equal measure. Their commitment to their roles helps in convincing you to root for their survival.

And there is that theme of survival yet again. I am reminded of a piece of folk wisdom people living near crocodile/alligator-infested waters often teach their kids. It goes like this, "If you see a crocodile on land, be sure to run away from it in a zig-zagging fashion and you'll survive. But if you ever see a crocodile in the water, rest assured that it is Game Over for you because it has seen you far before you have seen it and now you only have long enough to say your prayers."

Co-writer/director Ashwin Saravanan and his crew leave their characters in the water and wait for the crocodiles to attack. In the real world there is no chance of survival, but the method with which the storyteller constructs his fictional world leaves a sliver of a chance on the table. He makes you root for the impossible against your better judgement, and therein lies Game Over's biggest win. Every other piece of subtle social commentary you can glean from the movie is just a bonus.
Share. Save. Connect.
Tweet
GAME OVER (2019) SNAPSHOT 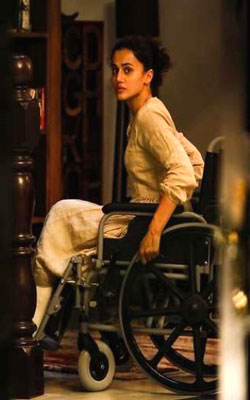 ADVERTISEMENT
This page was tagged for
game over telugu movie watch online
game over telugu full movie online watch
game over telugu
Game Over 2019 film
game.over film 2019
Follow @fullhyderabad
Follow fullhyd.com on
About Hyderabad
The Hyderabad Community
Improve fullhyd.com
More
Our Other Local Guides
Our other sites
© Copyright 1999-2009 LRR Technologies (Hyderabad), Pvt Ltd. All rights reserved. fullhyd, fullhyderabad, Welcome To The Neighbourhood are trademarks of LRR Technologies (Hyderabad) Pvt Ltd. The textual, graphic, audio and audiovisual material in this site is protected by copyright law. You may not copy, distribute, or use this material except as necessary for your personal, non-commercial use. Any trademarks are the properties of their respective owners. More on Hyderabad, India. Jobs in Hyderabad.