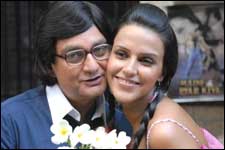 Deepa Garimella / fullhyd.com
EDITOR RATING
8.0
Performances
Script
Music/Soundtrack
Visuals
9.0
7.0
7.0
7.0
Suggestions
Can watch again
Yes
Good for kids
Yes
Good for dates
Yes
Wait for OTT
No
Vinay Pathak is excellent at quite a few things. He can spoof anyone on earth and have you shriek with laughter. He can play the idiot and have you irritated. But have you watched him actually weep? Well, the man's willing to be excellent at this, too. We suggest you be willing to watch him do it - you won't regret it.

And you can be forgiven for thinking Dasvidaniya is a cryptic twist of some Hindi title related to the word 'ten'. It's Russian for 'goodbye', sure, but there's some truth to the Hindi root as well.

Amar (Vinay Pathak) is Munnabhai's Jimmy Shergill, extended. He does not smoke, drink or touch spice (of any sort), and his life's ambition consists solely of making it to the end of his daily things-to-do list. After being diagnosed with cancer and given the 'you should have come to us much earlier' schtick by doctors, he listens to his jeering inner voice, and makes up a different to-do list - a list of 10 things that really matter.

So you follow the man around as he breaks free from the frighteningly suffocating monotone that was his life. He gives it back to his insensitive boss, buys a new car, confronts an old crush (Neha Dhupia), and enrolls for guitar lessons. To meet his childhood chum (Rajat Kapoor), he goes abroad, where he finds love, also on his list. Then, he also sets a couple of relationships right.

The film drags through the first half an hour or so, rather idly, as Amar's character is sketched out in a rather cliched and predictable manner. The movie becomes engaging only when Amar starts his journey of self-fulfillment. There's a little bit of Russian because he falls in love with a Russian girl (you're introduced to her in the very first scene), but there's no pressure on you to understand any word other than 'Dasvidaniya'.

Then, there is no over-the-top emotion, no intensely profound observation on life and death, and no hard-hitting revelation. It is a simple account of a man on the way to getting in touch with himself. Oh, the comedy? Not the kind to guffaw loudly at, but subtle, cute and clever. In any case, it's a feel-good film, and not a memorial service.

When Amar dies, a part of you - a part bigger than what you lost when either Shah Rukh or Rajesh Khanna died on screen - dies. There's an Amar in all of us, an Amar who starts smelling the roses only when confronted with the end of the road. But seeing as he finally did give significantly to the one person he owed so much - himself - you are happy for the man, happy to have seen him go at peace with himself.

Of course, the performances are tops, with the regulars - Vinay Pathak, Rajat Kapoor, Saurabh Shukla, Suchitra Pillai - and others, like Sarita Joshi and Gaurav Gera, doing great. It's the kind of film that doesn't feel like a film, as much as like a real slice of life. Kailash Kher's music has his raw but soulful touch, with captivating background music. The song Alvida is brilliant, and so is the retro-style Muskura.

You have to watch Dasvidaniya it with the air of a lazy Sunday brunch with the family, but don't wait for a Sunday to do it - the film isn't meant for a long run at the box office.
Share. Save. Connect.
Tweet
DASVIDANIYA SNAPSHOT

ADVERTISEMENT
This page was tagged for
dasvidaniya movie
Dasvidaniya hindi movie
Dasvidaniya reviews
release date
Vinay Pathak, Rajat Kapoor
Follow @fullhyderabad
Follow fullhyd.com on
About Hyderabad
The Hyderabad Community
Improve fullhyd.com
More
Our Other Local Guides
Our other sites
© Copyright 1999-2009 LRR Technologies (Hyderabad), Pvt Ltd. All rights reserved. fullhyd, fullhyderabad, Welcome To The Neighbourhood are trademarks of LRR Technologies (Hyderabad) Pvt Ltd. The textual, graphic, audio and audiovisual material in this site is protected by copyright law. You may not copy, distribute, or use this material except as necessary for your personal, non-commercial use. Any trademarks are the properties of their respective owners. More on Hyderabad, India. Jobs in Hyderabad.