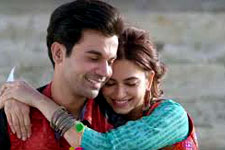 T J Reddy / fullhyd.com
EDITOR RATING
4.0
Performances
Script
Music/Soundtrack
Visuals
6.0
3.0
3.0
4.0
Suggestions
Can watch again
No
Good for kids
Yes
Good for dates
Yes
Wait to rent it
Yes
If there is one movie the romance Shaadi Mein Zaroor Aana shares a stark similarity with, it would be 2016 thriller Don't Breathe. Yes, you read that right. Let me explain.

Don't Breathe, while extremely profitable, was a pretty divisive movie. While most people were on board with the story of a trio of downtrodden teens stealing money from a murderous blind army veteran, their adoration of the movie was either heightened or absolutely destroyed with that one scene which involved a turkey baster being used for a purpose its creators never intended.

Before we get to that, we must start at the beginning (I know what I said). Set in the over-populated, almost urban city of Kanpur, he story introduces us to Satyender aka Sattu (Rajkummar Rao), a young man who thinks running shoes are acceptable footwear on a date, and Aarti (Kriti Kharbanda), a young lady who works as a collection of traits that make up a modern day female lead - she is enviably intelligent, psychologically oppressed by her father, fantasizes about drinking whisky ...you get the point. Set up to meet by their respective families, the two form a quick bond owing to some shared liberal beliefs in an overtly conservative environment.

While this might seem clichéd enough to raise some red flags, the movie and most importantly the actors (both lead and supporting) share stellar chemistry with each other to help keep the film gliding along its pre-set path. A great deal of courtship, dowry negotiation and civil services exams later, Aarti goes missing on the day of her wedding leaving broken hearts and empowered women in the wake while reminding the audience of Badrinath Ki Dulhania's distinct aftertaste.

At this juncture, the movie pivots. We now leave the warm, well-written walks and talks back in the dust as a revenge saga takes centrestage. The word "jarring" seems inadequate to successfully encapsulate this shift. Hence I'll lift a line from Batman vs Superman: "In this world, every action is a political action".

This movie can be viewed through two distinct prisms, and is bound to agitate one set of viewers more than the other. For the more traditional lads and a few lasses, an '80s-'90s era love-revenge drama might play better than it does for the more liberal guys and girls. I employ you to draw your own conclusions hereon.

Dissecting the film on its purely cinematic merits, we can universally relate to the story of a young man who can't choose as much as his underwear without his parents, morphing into a high-powered member of society, and of a young woman who escapes systematic misogyny in the hope of serving the government and in turn its citizens. However, these likable characters lose all semblance of common sense when plot advancement becomes their sole reason for existence.

Once this gear change is set in motion, the movie mutates well-rounded Aarti and Satyender to much more easily consumable stereotypes. Man = capable, woman = crying. Man = saviour, woman = damsel in distress. Man = successful because a woman broke his heart, woman = failing miserably because she hurt a man. And so forth. More than being overused clichés and tropes, these are deepset values that permeate our stories no matter how "progressive" we think we have become as a society.

This sentiment is echoed by the huge cast of supporting character actors in the movie. Manoj Pawa, K K Raina, Vipin Sharma, Alka Amin, Govind Namadev, Navni Parihar and many others work to convey the claustrophobic atmosphere the young men and women find themselves in a daily basis, with aplomb.

Actors Rajkummar Rao and Kriti Kharbanda share pleasant chemistry with each other all through the first half symbolising a changing thought process and perspective when compared to their parents. But like the movie itself, their performances settle in with those age-old clichés mentioned above. This change is more prominent with Rao's Satyender because of the lack of effort the movie puts in with exploring his relationship with his surroundings. His misguided crusade for justice, while bound to elicit whistles from the crowd, is as contrived as Kharbanda's Aarti's need to be a slobbering mess and a baby-talking bimbo as the movie reaches its inevitable climactic exchange; a genuine waste of some talented actors.

The world these characters find themselves in is not quite original, either. The cinematography, look and feel of film matches those of the Bareilly Ki Barfis and Shuddh Desi Romances of the world, and the music isn't far behind either. A woman can be "sona" and a man can like her "more than himself" only so many times before those lyrics and saccharine tunes become undistinguishable from the many other songs on your music streaming apps.

And that is where we stand with Shaadi Mein Zaroor Aana. It has some novel ideas it wants to explore and some cheerful characters it wants us to connect with, but its handling of both work towards its eventual detriment as it wants to have its cake and eat it, too. While advocating against social evils, it revels in cinematic evils. It squanders all the goodwill it builds for itself by approving of psychological manipulation and sexual harassment under the pretence that if you hurt someone they are in full rights to take advantage of you. When one takes the redemptive arc out of the equation, what we are left with are two deeply problematic people, two regressive ideas and one mainstream movie doling out their story to the masses. 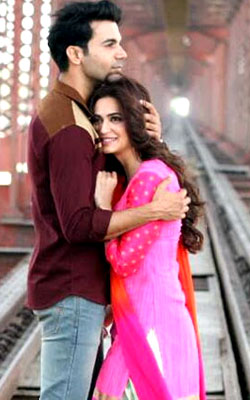