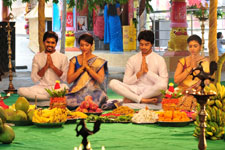 Ravi Kandala / fullhyd.com
EDITOR RATING
3.5
Performances
Script
Music/Soundtrack
Visuals
4.0
3.0
5.0
6.0
Suggestions
Can watch again
No
Good for kids
No
Good for dates
No
Wait to rent it
No
So only big movies get an 8:45 am show in Prasads Multiplex in Hyderabad. So when this reviewer checked Bookmyshow and found that Rojulu Marayi had an 8:45 am show, it was pretty shocking. But then we saw the names behind the movie - Dil Raju and Maruthi - and we understood. Both of them hold enough sway in Tollywood currently and can manage a release in a large number of cinemas.

However, even they cannot manage to pull in the audiences to the cinemas. Today morning's show was the emptiest we've seen Prasads in a while.

Rojulu Marayi stars Tejaswi Madiwada as Rambha, Kruthika Jayakumar as Aadya, Chethan as Ashwit and Parvateesam as Peter. Yes, except for Tejaswi Madiwada, you might not recognize any of the names. Ashwit is in love with Aadya while Peter is ready to do anything for Rambha. He even gives up his job as a manager and takes up her job as a franking clerk so he can keep her away from the guy in the office next door. Aadya and Rambha, however, are in love with other guys and are only staying around Ashwit and Peter for the benefits they can derive from them.

The two girls once visit a Baba in Srisailam and are told that their husbands would die within three days of the wedding. Rambha immediately decides that they will marry Peter and Ashwit, and once the boys die, will go ahead and marry the guys they love. How this plan pans out forms the rest of the plot.

Rojulu Marayi's biggest problem is its predictability. For a movie where the leads are chased by death through a good part of the first half, the thriller quotient is totally missing. And right from the interval point, the film is on such expected lines, you know the conclusion from a mile away. All the twists that the team attempts to put in post this point are stale, and the comedy of the first half also tapers off quite a bit leaving you waiting for the movie to end. That a writer like Maruthi, who's on his way up on the directorial/writing ladder, would write such a predictable film is difficult to fathom. The new director Muralikrishna knows his craft but needed a better story. The only saving grace of the film are a few laugh-out-loud moments in the first half.

Performance-wise, Tejaswi Madiwada walks away with all the honours. The girl shows what an advantage it is when you understand the dialogues that you're mouthing, and carries off her role with absolute aplomb. Kruthika Jayakumar wears a pained look, the same one that she wore in Drishyam, throughout the movie. Chethan has no expressions and bad dialogue delivery, while Parvateesam has too many expressions and an extremely loud manner that does him no good. The remaining cast hardly have any scope to perform.

The film is technically decent, and the first two songs are shot pretty well. The project has clearly been wrapped up on a very tight budget, and is shot in barely three locations.

Bichagadu, A Aa and Gentleman are clearly going to get an extended run at the box-office - rojulu are not going to maarayi any time soon!
Share. Save. Connect.
Tweet
ROJULU MARAYI SNAPSHOT 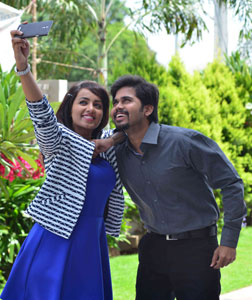 ADVERTISEMENT
This page was tagged for
Rojulu Marayi telugu movie
Rojulu Marayi reviews
release date
Chetan Maddineni, Tejaswi Madivada
theatres list
Follow @fullhyderabad
Follow fullhyd.com on
About Hyderabad
The Hyderabad Community
Improve fullhyd.com
More
Our Other Local Guides
Our other sites
© Copyright 1999-2009 LRR Technologies (Hyderabad), Pvt Ltd. All rights reserved. fullhyd, fullhyderabad, Welcome To The Neighbourhood are trademarks of LRR Technologies (Hyderabad) Pvt Ltd. The textual, graphic, audio and audiovisual material in this site is protected by copyright law. You may not copy, distribute, or use this material except as necessary for your personal, non-commercial use. Any trademarks are the properties of their respective owners. More on Hyderabad, India. Jobs in Hyderabad.