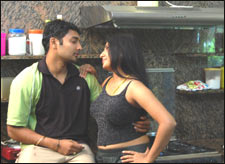 EDITOR RATING
1.0
Performances
Script
Music/Soundtrack
Visuals
3.0
1.0
2.0
2.0
Suggestions
Can watch again
No
Good for kids
No
Good for dates
No
Wait for OTT
No
It's a bad sign if you are looking at your watch repeatedly while watching a movie. It's worse if it shows that only 10 minutes have passed since it started. Erra Gulabi is a horror movie, and you start getting horrified pretty fast as the flick looks the perfect mix of a Telugu TV serial, a Mallu semi-porn wannabe, and many of your memories that you thought had disappeared forever thanks to some supreme efforts you made. It has been promoted as a Tamil superhit, and whether you believe it could be one depends on your definitions of superhit, Tamil and a.

The umpteenth copy of I Know What You Did Last Summer, Erra Gulabi substitutes the substance in the script of the original with the substance in the body of its leading lady. Now don't get us wrong - we at fullhyd.com have nothing against overweight people. In fact, several of our close friends are overweight people, and we constantly try to find more overweight people to become close friends with, or at least get our existing friends to become overweight. It's just that the leading lady also dances in a bustier and short tights. That's the second joke, the first one being that this movie has songs and all.

Anyway, Mahesh (Munna) and Mounika (Mounika) are a newly-wed couple who reach a lonely guesthouse on a forlorn island for their honeymoon. Now every man wants to get an ideal wife - i. e. someone with nothing but sex on her mind. However, there are only a few of them going around, and Mounika is just another woman with a complicated wiring in her head - she stops to admire nature, she likes to eat regularly, she needs to be in the mood to have sex, and she gets scared of ghosts. And thanks to all of this, Mahesh is getting frustrated. And so are the audiences.

Anyway, so Mounika believes the guesthouse is haunted. It all starts when she hears a lot of footsteps rushing - she first thinks it's the audiences trying to get out, but quickly reasons that it must be a ghost since the footsteps sound like someone trying to come in. She's naturally scared, and shows this by wearing very few clothes. Mahesh is concerned for her, and he shows this by trying to touch her in those few places anyway covered by the clothes. There's then a song, and the movie shows this by Mounika dancing in the aforementioned bustier and short tights. The ghost is truly pissed by the disgusting pace and flow, and shows this by killing 3 girls who were Mounika's erstwhile roommates.

So yes, there's a flashback. Mounika stayed with 3 shapely female roommates who raped an insurance salesman (Chandru). Yes, it appears unlikely, especially to happen to you. The poor guy dies, and the girls put him in a suitcase and dump him by the side of a lonely highway. He then becomes a ghost (okay, the movie doesn't actually say so, but why would some other random guy become a ghost?) and goes after the girls. And now Mounika is in serious trouble.

Erra Gulabi (Silandhi in Tamil) was perhaps made on a budget of Rs. 25 lakhs - 90% of the film is shot in the dingy guesthouse. It's almost tempting to conclude then that someone was doing the heroine a favour for some reason by making this movie - nobody would be dumb enough to think this flick would have any box-office potential. And if it's soft-porn you're looking for, there are plenty of other movies in other theatres that make the cut, assuming the Internet is off-limits for you.

Then, maybe you could still benefit from watching this one - they'll be so grateful, they'll probably cast you in their next production. We give that greater odds than of you getting raped by 3 shapely women.
Share. Save. Connect.
Tweet
ERRA GULABI SNAPSHOT

ADVERTISEMENT
This page was tagged for
Monica erra Gulabi
Mounika erra gulabi
Ramanthapur Gulabi
Yerra gulabi friendship movie
Erra Gulabi telugu movie
Follow @fullhyderabad
Follow fullhyd.com on
About Hyderabad
The Hyderabad Community
Improve fullhyd.com
More
Our Other Local Guides
Our other sites
© Copyright 1999-2009 LRR Technologies (Hyderabad), Pvt Ltd. All rights reserved. fullhyd, fullhyderabad, Welcome To The Neighbourhood are trademarks of LRR Technologies (Hyderabad) Pvt Ltd. The textual, graphic, audio and audiovisual material in this site is protected by copyright law. You may not copy, distribute, or use this material except as necessary for your personal, non-commercial use. Any trademarks are the properties of their respective owners. More on Hyderabad, India. Jobs in Hyderabad.