Just Go With It Review 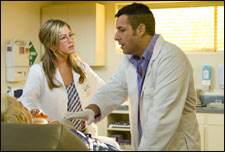 Samrat Sharma / fullhyd.com
EDITOR RATING
4.0
Performances
Script
Music/Soundtrack
Visuals
7.5
1.5
6.0
6.0
Suggestions
Can watch again
No
Good for kids
No
Good for dates
No
Wait to rent it
Yes
History time kids! Two Frenchmen called Pierre Barillet and Jean-Pierre Gredy wrote a play called Fleur de Cactus, which in the 60s was turned into a successful Broadway play called The Cactus Flower. In the late 60s, the Broadway play was made into a Walter Matthau, Ingrid Bergman and Goldie Hawn film of the same name. In 2005, any of these (or maybe even all of these) unofficially became the source for the David Dhawan film Maine Pyar Kyun Kiya? (really, with Dhawan, who knows which of the three source materials he mined for his 'inspiration')

In 2011, Adam Sandler, that very David Dhawan-esque of actors, stars in a remake of the 1969 film, and life comes a full circle for Hindi film viewers.

How much you enjoyed and/or fondly remember the David Dhawan film should tell you a lot about your personal propensity to like this newest of all versions of that same story. The tone is quite similar, and the jokes plumb a similar depth of inanity. Actually, scratch that. This film is, if that was at all possible, more tasteless and lowest common denominator than that 'inspired' film.

For those of you who have not been exposed to any of the earlier versions - a doctor who pretends to be married to pick up women, falls for a girl who finds out half his charade: she thinks he is married. He then coerces his single-mom secretary to pretend to be his wife who wants a divorce, and after many a wacky adventure, the secretary and the boss find true love in each together.

This time round, Sandler is the good doctor, Jennifer Aniston is the plain secretary who turns smoking hot when the plot calls for it, and Brooklyn Decker, the hotness-by-default, is the poor girl left to be played cruel jokes on. Actually, Jennifer Aniston (as with Ingrid Bergman and Sushmita Sen before her) is classy enough that she elevates the level of the film when she's around, but Dennis Dugan leaves no stone unturned to upturn that.

With Dugan directing, the expectations were minimal, but there are some completely awful choices on display here. The voyeurism of the females in this film is surreal in its brazenness. Every time there is an interlude from the kick-to-the-nuts jokes, there is a shot of one of the 3 (Nicole Kidman cashing an easy pay cheque completing the trifecta) hot women in some sort of exhibitionist free-run.

Adam Sandler is, let's face it, a huge star and great actor. The man who can do films like Punch Drunk Love and Reign Over Me is not going to deliver a horrible performance even in a film like this. He is often funny, and quite generous with the levels he is willing to go to in order to make us laugh.

That none of his dramatic roles tend to convert into cash means he resorts to his staple of films, and people like Dennis Dugan means that we get distasteful jokes, crude humour and a film that has its tone all over the place.

It takes great talent in lowest-common-denominator-pandering to remove all the sub-textual elements that a plot like this can serve, including a woman's place in society, the value of truth, and how our conditioning dictates our prejudices blinding us to that which we truly need. If you cannot have your fill of hot women in PG-13 clothing and some bordering on creepy humour, boy howdy, do we have a film for you. If not, please go watch
Share. Save. Connect.
Tweet
JUST GO WITH IT SNAPSHOT

ADVERTISEMENT
This page was tagged for
Just Go With It english movie
Just Go With It reviews
release date
Adam Sandler, Jennifer Aniston
theatres list
Follow @fullhyderabad
Follow fullhyd.com on
About Hyderabad
The Hyderabad Community
Improve fullhyd.com
More
Our Other Local Guides
Our other sites
© Copyright 1999-2009 LRR Technologies (Hyderabad), Pvt Ltd. All rights reserved. fullhyd, fullhyderabad, Welcome To The Neighbourhood are trademarks of LRR Technologies (Hyderabad) Pvt Ltd. The textual, graphic, audio and audiovisual material in this site is protected by copyright law. You may not copy, distribute, or use this material except as necessary for your personal, non-commercial use. Any trademarks are the properties of their respective owners. More on Hyderabad, India. Jobs in Hyderabad.