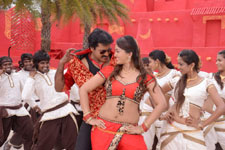 Kritika Deval / fullhyd.com
EDITOR RATING
4.5
Performances
Script
Music/Soundtrack
Visuals
5.5
6.5
6.0
5.5
Suggestions
Can watch again
No
Good for kids
No
Good for dates
No
Wait to rent it
Yes
When a minor head injury leads to the discovery of a brain tumor that will kill him in ten days, cowardly Rambabu (Sunil) decides to hasten the process by meeting a train head on. A Good Samaritan (Tanikella Bharani) pushes him out of the way, and proceeds to inspirational speechify him out of his suicidal, tendencies.

The result? Rambabu now realises that he now has ten whole days in which to immortalize himself, and immediately heads to Hyderabad to set all of our beleaguered city's wrongs right. In the process of getting rid of various gangsters, rescuing women from their mothers-in-law, and general derring doery, he also manages to fall in love.

However, it doesn't matter, because he is to be worm feed in 10 days, and worm feed can hardly dream of undying love.

Unbeknownst to our noble hero though, the doctor who diagnosed his death warrant has been looking for him. The reason? It turns out Rambabu really did only have a minor head injury, and the tumor is the private property of another man of the same name.

Barely does Rambabu descend from his cloud of rapture, than he realises that his actions over the previous days have ensured that a brain tumor are the last of his worries.

One would assume that it would be hard to make this story boring. One would be wrong.

Bheemavaram Bullodu starts off well enough. Sunil, as usual, gives a sincere performance that captures your sympathy, if not your interest. Somewhere along the way, though, a story that wasn't too exciting to begin with loses what little steam it had, and ends up becoming a flat tire laboring towards the finish line before it bursts.

Perhaps this has something to do with fight scenes that could pass for lullabies, or the often awkward "comedy" scenes, or the hero's lackluster romance with Nandini (Ester Noronha) - the daughter of a love-hating filmmaker - but don't be surprised to walk out of the theatre yawning incessantly and wishing fervently for your bed.

Since this is a comedy, you'll laugh occasionally, very occasionally, but mostly because the cast is brilliant on its own. Sunil is as charmingly nonchalant as ever, but his post-weightloss lackluster looks took their toll on his performance, not to mention the utterly asinine dialogues he was made to utter. Ester Noronha only has her height and complexion to her credit.

Sayaji Shinde, Thagubothu Ramesh and the rest try hard to make it worth your while, and fail in their efforts due to an incompetent screenplay.

The cinematography and production values are reminiscent of something you might find in a film of ten years ago. The music is altogether hit and miss, with the misses having the upper hand.

All in all, Bheemavaram Bullodu belongs on your TV on a lazy Sunday afternoon rather than on the screen of a multiplex. Save your money for better entertainment.
Share. Save. Connect.
Tweet
BHEEMAVARAM BULLODU SNAPSHOT 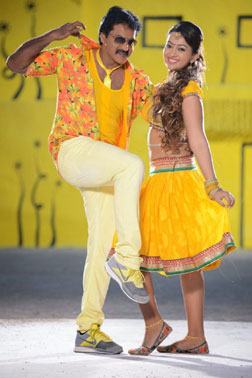 ADVERTISEMENT
This page was tagged for
Bheemavaram Bullodu telugu movie
Bheemavaram Bullodu reviews
release date
Sunil, Ester Noronha
theatres list
Follow @fullhyderabad
Follow fullhyd.com on
About Hyderabad
The Hyderabad Community
Improve fullhyd.com
More
Our Other Local Guides
Our other sites
© Copyright 1999-2009 LRR Technologies (Hyderabad), Pvt Ltd. All rights reserved. fullhyd, fullhyderabad, Welcome To The Neighbourhood are trademarks of LRR Technologies (Hyderabad) Pvt Ltd. The textual, graphic, audio and audiovisual material in this site is protected by copyright law. You may not copy, distribute, or use this material except as necessary for your personal, non-commercial use. Any trademarks are the properties of their respective owners. More on Hyderabad, India. Jobs in Hyderabad.