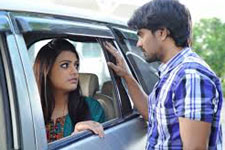 Kritika Deval / fullhyd.com
EDITOR RATING
3.0
Performances
Script
Music/Soundtrack
Visuals
4.0
4.0
3.0
3.0
Suggestions
Can watch again
No
Good for kids
No
Good for dates
Yes
Wait to rent it
Yes
There's a certain kind of cinema you have to admire. The kind that knows exactly what it is. Gola Seenu is one such movie that knows its job - to provide lightweight entertainment, in case you don't get tickets to this week's bigger release.Two things stand in the way of it being a thorough entertainer: 1. Sri, and, 2. Most of it is mind-numbingly boring.

Let's get the plot out of the way, first. So, Seenu (Sri) is rather loose of hand, foot and tongue. He and his friends Achi Raju (Raghu Babu) and Buchi Raju (Suman Shetty) owe a gangster a lot of money. Fortunately for them, Seenu falls in love with Sandhya (Tashu Kaushik), the daughter of an industrialist.

At the end of a what-passes-for-brain-storming session, the three come up with the idea of kidnapping Sandhya, ransoming her, marrying her to Seenu, and sending them off into the sunset.

So, now that that's over, let's figure out the problems with the movie.

Problem No. 1: Sri - a decent enough actor, but make him do the whole lover-boy stuff, and he turns positively repulsive. Lascivious once-overs and utterly fake blushes do not a lover-boy make.

Problem No. 2: IT IS BORING! - From the begging to the end, Gola Seenu is obviously an exercise in buffoonery and self deprecation, straight from the Allari Naresh School Of Buffoonery And Self Deprecation. But then, minus Allari Naresh's energy, and, when the most creativity used by the makers is in tweaking popular punch lines, the aforementioned exercise falls flat on its face, and makes us want to cover ours with a blanket, and doze off. Moments that actually make you laugh out loud are few and far between.

As far as the performances are concerned, Sri, as we said, is OK. Leading lady Tashu could learn to do things with her face other than that pout and narrow her eyes.

The rest of the cast, including thoroughly seasoned actors like Raghu Babu, Suman Shetty and Kota Srinivasa Rao, are only as good as the script allows them to be, which is not very.

The only reaction that the music will bring forth in you is "Where have I heard this before?", and the visuals betray the low production values of the movie, making it resemble the average Telugu TV show.

The only time you should be watching Gola Seenu is when it's on TV and there's nothing else to watch. Or else, give it a miss.
Share. Save. Connect.
Tweet
GOLA SEENU SNAPSHOT 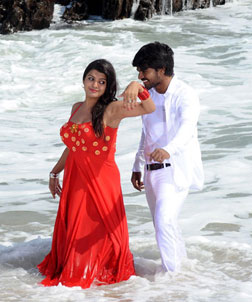 ADVERTISEMENT
This page was tagged for
Gola Seenu telugu movie
Gola Seenu reviews
release date
Sri, Tashu Kaushik
theatres list
Follow @fullhyderabad
Follow fullhyd.com on
About Hyderabad
The Hyderabad Community
Improve fullhyd.com
More
Our Other Local Guides
Our other sites
© Copyright 1999-2009 LRR Technologies (Hyderabad), Pvt Ltd. All rights reserved. fullhyd, fullhyderabad, Welcome To The Neighbourhood are trademarks of LRR Technologies (Hyderabad) Pvt Ltd. The textual, graphic, audio and audiovisual material in this site is protected by copyright law. You may not copy, distribute, or use this material except as necessary for your personal, non-commercial use. Any trademarks are the properties of their respective owners. More on Hyderabad, India. Jobs in Hyderabad.