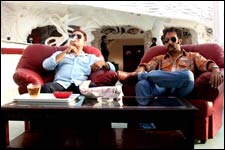 Deepa Garimella / fullhyd.com
EDITOR RATING
1.0
Performances
Script
Music/Soundtrack
Visuals
6.0
2.0
4.0
4.0
Suggestions
Can watch again
No
Good for kids
No
Good for dates
No
Wait for OTT
Yes
Hindi cinema has this parallel universe of flicks that have inventive plots but that no one outside of the film cares about. Many of these movies don't live up to their potential, a fatal state of affairs that may be spawned by the sheer lack of attention they get. It's an unfortunate catch 22, but thankfully, that doesn't discourage experimenters from trying.

The Film Emotional Atyachaar is a dark comedy, a genre that doesn't work on half-hearted writing - setting aside the fact that it is also a genre with limited appeal. However, the movie doesn't move on from being an idea; and when it does, it turns out to be misguided.

The film is a thriller that is narrated to us while a bloke called Hiten Sardesai (Anand Tiwari) drives a bullet-ridden businessman Vikram Jaiswal (Mohit Ahlawat) to safety.

In what is an increasing trend, the flick entwines a bunch of stories that are all set in Goa. There is a pair of weirdo cops (Ranvir Shorey & Vinay Pathak) who try to extort money from a casino owner (Abhimanyu Singh) by abducting his bar-dancing girlfriend (Kalki Koechlin).

Vikram Jaiswal is the anxiously-aggressive son of a business tycoon who wants to "arrive" as a business tycoon himself, and has just lost out on a deal. A trio of wannabe gangsters (led by Ravi Kissen) join the plot, as they try to pinch what they can off an upcoming drug deal.

We could say that the wit in the movie is about alright in places, but most of the time, the film overshoots cinematic liberties. For one, the sheer amount of profanity it uses reeks of plain stupidity. It's not just the swear words - some of the dialogues are plain dirty. Also, there are a couple of scenes that gross you out, and again, it's not even offensive - it's silly.

Plot holes are not the priority here - the focus seems to have been on simply making it a quick thriller that has a bunch of quirky characters and a couple of unexpected twists.

The comedy varies with the actor who's put in charge of the lines. Ranvir and Vinay do what they always do, but there's no spunk in their scenes. The duo has a delightful capacity to make everything look absurd, which would have helped matters greatly if they weren't given such distasteful humour to pull off.

Ravi Kissen does just what he always does, too, and his character ends up exactly as you'd expect - sleazy and not funny.

Amongst them all, Kalki Koechlin is interesting to watch, and Anand Tiwari as the frightened-to-death do-gooder is fun while he's around. The other actors aren't too bad.

The music comprises material that is typical of movies in this league, and a cabaret song set on Koechlin is mildly interesting. There's not much creativity in terms of how the film was shot, with most of the story taking place in dingy settings.

On the whole, you could rent this one if you have absolutely nothing else to.
Share. Save. Connect.
Tweet
EMOTIONAL ATYACHAR SNAPSHOT

ADVERTISEMENT
This page was tagged for
Emotional Atyachar hindi movie
Emotional Atyachar reviews
release date
Ranvir Shorey, Vinay Pathak
theatres list
Follow @fullhyderabad
Follow fullhyd.com on
About Hyderabad
The Hyderabad Community
Improve fullhyd.com
More
Our Other Local Guides
Our other sites
© Copyright 1999-2009 LRR Technologies (Hyderabad), Pvt Ltd. All rights reserved. fullhyd, fullhyderabad, Welcome To The Neighbourhood are trademarks of LRR Technologies (Hyderabad) Pvt Ltd. The textual, graphic, audio and audiovisual material in this site is protected by copyright law. You may not copy, distribute, or use this material except as necessary for your personal, non-commercial use. Any trademarks are the properties of their respective owners. More on Hyderabad, India. Jobs in Hyderabad.