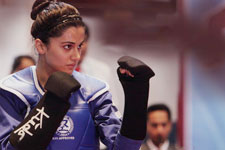 Indranil Majumdar / fullhyd.com
EDITOR RATING
6.5
Performances
Script
Music/Soundtrack
Visuals
8.0
6.0
6.0
7.0
Suggestions
Can watch again
No
Good for kids
No
Good for dates
No
Wait to rent it
Yes
There is something admirable about writer/director Neeraj Pandey. He walks the patriotic tightrope very carefully - there is a certain pomp and show about it, but he is almost never jingoistic. And he knows the issues that plague modern-day India all too well.

Naam Shabana, while not helmed by Pandey, has his stamp on its style, conceptualization and framing - he is the writer. He has however chosen to offer the reins of direction of this one to Shivam Nair, and that makes a difference to the final product - while Nair's attempt is commendable, it's not nearly close to Pandey's craftsmanship.

Naam Shabana has Taapsee Pannu in the titular role Shabana - which had a cameo in the original Baby - and it's a wonderful spin-off. Not everything has been hunky-dory with Shabana Khan, and the movie establishes that fairly early. You're given a sneak peek into her past and her present, and it is heartening to see the makers investing enough time to establish a rounded character. The conversations with her Ammi feel real, and the ones with her boyfriend are as fresh as any written in recent history.

The first half is brilliant, and a good part of the credit for that goes to the casting director who has lined up excellent performers. Pannu and Manoj Bajpayee (as Ranvir Singh) should be singled out for making the first 60 minutes feel like a breeze.

But that's where the good ends, and the bad and the ugly begin. What drives the next 60 minutes are a couple of riveting cameos by Akshay Kumar (as Ajay Singh Rajput) and Anupam Kher (as Om Prakash Shukla). Pannu's character is almost relegated to the sides, and her being positioned as the soul of Naam Shabana almost feels like it was done as an afterthought.

What's worse is a hackneyed attempt at making a statement for gender-equality with the use of one of the worst devices ever - chromosomes. You can almost feel Bajpayee not advocating whatever he is saying.

Also, the expectations from Prithviraj Sukumaran's character Tony were immense, and it will be a character more spoken about for the character it could have been. In Sukumaran's defense, he plays it really well, despite being mocked by some shallow writing and character development.

You also wish the writers had worked on the climax a lot more, since that is exactly what had made Baby Pandey's magnum opus.

There are lots of highs alongside the lows, though, and the impeccable camerawork in the film is one of them. The nostalgia in the film works, too, and quite wonderfully. Akshay Kumar going "Itni door se aaya hoon, kuch toh karne do" is sheer genius, and a jab at Dabangg is quite skillfully orchestrated.

The music seems to work fine till they pan into a nightclub (twice!) and leave you clueless as to why two cacophonous numbers were even required. Manoj Muntashir's lyrics are masterfully penned, but you wish there were better songs to breathe life into the words.

Naam Shabana works because of some wonderful acting by Taapsee Pannu, Akshay Kumar and Anupam Kher, and some breathtaking aerial shots of Vienna, Kuala Lumpur and Mumbai. If you're a fan of any of the leads, by all means head for the nearest cinema screening this one. And if you leave dejected by the entirety of it, well, you were warned.
Share. Save. Connect.
Tweet
NAAM SHABANA SNAPSHOT 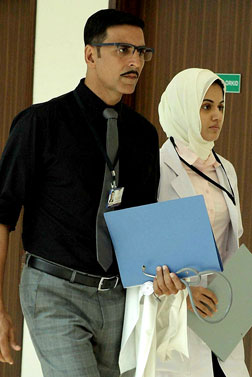 ADVERTISEMENT
This page was tagged for
Naam Shabana hindi movie
Naam Shabana reviews
release date
Taapsee Pannu, Akshay Kumar
theatres list
Follow @fullhyderabad
Follow fullhyd.com on
About Hyderabad
The Hyderabad Community
Improve fullhyd.com
More
Our Other Local Guides
Our other sites
© Copyright 1999-2009 LRR Technologies (Hyderabad), Pvt Ltd. All rights reserved. fullhyd, fullhyderabad, Welcome To The Neighbourhood are trademarks of LRR Technologies (Hyderabad) Pvt Ltd. The textual, graphic, audio and audiovisual material in this site is protected by copyright law. You may not copy, distribute, or use this material except as necessary for your personal, non-commercial use. Any trademarks are the properties of their respective owners. More on Hyderabad, India. Jobs in Hyderabad.