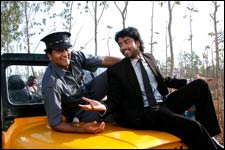 Deepa Garimella / fullhyd.com
EDITOR RATING
5.5
Performances
Script
Music/Soundtrack
Visuals
7.0
4.0
4.0
4.0
Suggestions
Can watch again
No
Good for kids
Yes
Good for dates
Yes
Wait for OTT
Yes
No comic filmmaker can resist the temptation of working an entire script around one ridiculous mix-up. Saradaga Kasepu is another in the long line of films that want to milk everything they can out of one single muddle.

Rangababu (Allari Naresh) is the loyal driver of a local big shot (Jeeva) in Rajahmundry, whose son Srinivas (Srinivas Avasarala) is an arrogant NRI. Srinivas has just returned home from America, and his parents want him to check out a girl in Hyderabad.

S and R set out, but switch roles - Srinivas is the driver now, and Rangababu is Srinivas. This plan was made so Srinivas (the real one) can study his heroine from afar and make an informed decision. This is the point until which everyone in the flick seems sane.

Srinivas' parents, however, didn't know that some things are meant to stay secrets, just like the script of Saradaga Kasepu. Unknown to both R and S, they call up the girl's parents (Ahuti Prasad, etc.) and let them in on the ingenious arrangement. Her parents, in turn, inform her, and shortly, everyone knows everything.

If you aren't already aware, this is a huge give-away to the fact that all is not well with the original mess-sers. Accident after accident takes place while Srinivas drives to Hyderabad, and this forces him to give up his make-believe role and hand the wheels back to Rangababu.

The two reach the place of the heroine Manimala (Madhurima), where Rangababu is given a royal welcome and Srinivas is treated like dirt from the claws of the left hind paw of the household pet dog. Their attempts to convince their hosts fall on deaf ears.

To add to the melee is Manimala's uncle Neelakantham (M S Narayana), who a corrupt lawyer (Krishna Bhagawan) plots to kill for money.

Saradaga Kasepu is the kind of movie you'd want to rent for those few chuckles before you go to bed, but one at the end of which you wonder why you forced yourself to stay up so late watching this. To its credit, comic stalwarts like Krishna Bhagawan and Ahuti Prasad, and, of course, Allari Naresh himself, keep pumping in the laughs.

However, the plot is slow and the visuals are run-down, and you aren't exactly thrilled at the silly Subham scene. Chakri's tunes do manage to spruce up the film somewhat.

A few of the jokes are downright hilarious, but the momentum isn't sustained throughout, especially when Vamsi resorts to making his actors slap one another and kick one another in the wrong places. There's no unclean humour, though.

Allari Naresh is a hoot, and equally show-stealing are the scenes with M S Narayana and Krishna Bhagawan. Srinivas Avasarala is given a colourless role without enough energetic humour, but he manages to pull off a decent job. Madhurima is all grace and talent, and it would be refreshing to watch her in some better cinema.

Enjoying this one depends more on you than on the movie. It just might work for you - watch it if you insist on watching every one of Allari Naresh's undertakings.
Share. Save. Connect.
Tweet
SARADAGA KASEPU SNAPSHOT

ADVERTISEMENT
This page was tagged for
Saradaga Kasepu telugu movie
Saradaga Kasepu reviews
release date
Allari Naresh, Srinivas Avasarala
theatres list
Follow @fullhyderabad
Follow fullhyd.com on
About Hyderabad
The Hyderabad Community
Improve fullhyd.com
More
Our Other Local Guides
Our other sites
© Copyright 1999-2009 LRR Technologies (Hyderabad), Pvt Ltd. All rights reserved. fullhyd, fullhyderabad, Welcome To The Neighbourhood are trademarks of LRR Technologies (Hyderabad) Pvt Ltd. The textual, graphic, audio and audiovisual material in this site is protected by copyright law. You may not copy, distribute, or use this material except as necessary for your personal, non-commercial use. Any trademarks are the properties of their respective owners. More on Hyderabad, India. Jobs in Hyderabad.