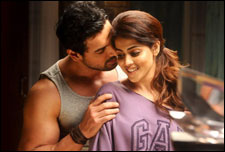 Samrat Sharma / fullhyd.com
EDITOR RATING
5.5
Performances
Script
Music/Soundtrack
Visuals
4.5
6.5
7.0
6.5
Suggestions
Can watch again
No
Good for kids
No
Good for dates
No
Wait to rent it
Yes
Nishikant Kamat is a smart man - his past films are proof that he isn't just your by-the-numbers director - and he knows what he is doing with Force. Sadly, all the decisions made in the film were made as a commercial enterprise, severely undermining any art that he could have brought to the table.

In choosing a Tamil film to remake, he chose Kaakha Kaakha, which was an interesting take on the usual cop actioners, and a refreshing voice in the crowd of hyper-edited, brain-dead revenge films. He assembled a crew as talented as Ayananka Bose to shoot it, and Harris Jayaraj to remaster his original songs. He even got an equally charismatic villain as Kaakha Kaakha to keep the stakes and narrative import the same.

The mistake he made was to get confused in making a film he wanted and pandering to what was perceived as market realities. This is a thoroughly compromised film where the tone never matches the subject, the actors never rise above camp, and the film never feels cogent, even in the breakneck final bits.

For those who missed out on Kaakha Kaakha, or the closer-to-home Gharshana, Force tells the story of an upright narcotics cop who prefers killing criminals to letting them stand trial. His no-nonsense exterior is broken when he meets a sprightly young social worker, adding a chink to his steely armour. When he guns down another of umpteen criminals, his extremely charismatic brother vows revenge and makes his life hell.

It sounds very formulaic, because it is. It was in the grounded way Gautham Menon framed the original, and the tone conveyed by the actors, that made the film special. Nishikant Kamat keeps the formula intact, but tries to make a standard masala entertainer. The action is often loud and flashy, the acting non-existent, and the tone of the film is all over the place. Mostly glossy with some bits of violence thrown in, it feels more a commercial with good-looking people everywhere, than a cop thriller.

Despite the broken structure, Mohnish Behl gets to shine (yes, in that role) and Vidyut Jamwal makes up for his lack of acting with his screen presence. The film looks decent, though not mind blowing, which Bose is capable of, but we can take that. The action, too, is quite entertaining. It's the stuff around it that fails to take off the way Suriya's star-making film did.

Maybe it was always a doomed attempt - I wasn't a big fan of Gharshana either to tell you the truth - maybe the magic can't be replicated. As it stands, Force is good if you don't have anything else to watch and you must watch some major biceps being flexed.
Share. Save. Connect.
Tweet
FORCE SNAPSHOT

ADVERTISEMENT
This page was tagged for
Force hindi movie
Force reviews
release date
John Abraham, Genelia D\'Sauza
theatres list
Follow @fullhyderabad
Follow fullhyd.com on
About Hyderabad
The Hyderabad Community
Improve fullhyd.com
More
Our Other Local Guides
Our other sites
© Copyright 1999-2009 LRR Technologies (Hyderabad), Pvt Ltd. All rights reserved. fullhyd, fullhyderabad, Welcome To The Neighbourhood are trademarks of LRR Technologies (Hyderabad) Pvt Ltd. The textual, graphic, audio and audiovisual material in this site is protected by copyright law. You may not copy, distribute, or use this material except as necessary for your personal, non-commercial use. Any trademarks are the properties of their respective owners. More on Hyderabad, India. Jobs in Hyderabad.