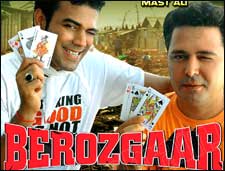 Deepa Garimella / fullhyd.com
EDITOR RATING
3.0
Performances
Script
Music/Soundtrack
Visuals
7.0
3.0
4.0
4.0
Suggestions
Can watch again
No
Good for kids
No
Good for dates
No
Wait for OTT
Yes
Berozgaar has the same crude look and feel as the rest of the homespun flicks that its makers insist on churning out by the dozen, irrespective of whether the films are getting better in the least. If you haven't sampled this breed of movies earlier, Berozgaar is no reason to start off, unless you've decided to dedicate 2 hours of your life to yawning all the way down.

Berozgaar is the story of 2 unemployed youth who, in the first place, don't try hard enough for a job, and then, resort to thievery, and finally, sit and crib about how life has been a total bit**.

You'd think it's an easy job to tell a story about how life turns around on people it has dumped, but Berozgaar not only makes the whole experience seem pointless, it also manages to leave a bad taste in your mouth at the end of it all.

Nawab (Aziz Nasser) and his friend Baba (Mast Ali) haven't had a job ever. While Nawab is "tired" of all the interviews, the latter is of the opinion that being employed isn't his thing and keeps loafing around. Nawab decides that his friend's life is the way to be. Together, they get kicks out of living life without earning a single paisa.

They gorge on a tiffin cart and then fake an illness so they don't have to pay the cart-wallah, but that's among their milder of offences. Stealing from hard-working people who want to make an honest living - including cleaning up an entire kirana shop - is what gives them real thrills.

The film grunts along, and has dirty goondas, irritable autorickshaw drivers, and sour wives and parents in the plot, presumably to prompt the laughs. Later, Nawab and his sidekick get into really deep trouble, following which they finally figure out that they must stop being scumbags.

In the end, the police reward them after they manage to defuse a time bomb. This gives them a chance to turn over a new leaf. They then become traffic policemen, earning handsomely from all the bribes.

The performances are good, as is usual with all these flicks. Both Mast Ali and Aziz Nasser are spontaneous, and so is Akbar Bin Tabar, who plays the role of the auto driver.

However, it's the story that needs to belong in the paper shredder - on second thought, that's probably where it came from. There's no social message, no ethics, and no wisecracking humour either. Just a bunch of casually pieced-together scenes of two jobless creeps living their unentertaining life.

The usual hint of grossness that you'd associate with these flicks makes its presence felt - if people performing their morning ablutions is what you totally love to laugh at, here's your party.

A couple of songs seem to have been squeezed into the scenes, and an item song is among the most professionally-shot parts of the film. The visuals are tacky as ever.

ADVERTISEMENT
This page was tagged for
berozgaar hyderabadi full movie download
berozgaar movie download
berozgaar full movie download
Berozgar movie
hyderabadi movie berojgaar
Follow @fullhyderabad
Follow fullhyd.com on
About Hyderabad
The Hyderabad Community
Improve fullhyd.com
More
Our Other Local Guides
Our other sites
© Copyright 1999-2009 LRR Technologies (Hyderabad), Pvt Ltd. All rights reserved. fullhyd, fullhyderabad, Welcome To The Neighbourhood are trademarks of LRR Technologies (Hyderabad) Pvt Ltd. The textual, graphic, audio and audiovisual material in this site is protected by copyright law. You may not copy, distribute, or use this material except as necessary for your personal, non-commercial use. Any trademarks are the properties of their respective owners. More on Hyderabad, India. Jobs in Hyderabad.