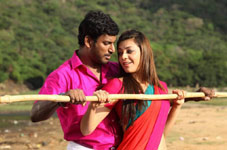 Ravi Kandala / fullhyd.com
EDITOR RATING
5.5
Performances
Script
Music/Soundtrack
Visuals
6.0
6.0
3.0
6.0
Suggestions
Can watch again
No
Good for kids
No
Good for dates
No
Wait to rent it
No
Right in the beginning of Jayasurya, when Vishal makes his entry, he tells a small-time thief, "I'm Pandem Kodi, don't you dare fight with me." And the sidekick retorts, "Not just he, everyone in the audience knows you are Pandem Kodi."

And then a semi-crystallized thought lurking in the recesses of your mind for long, finally comes out with blinding clarity. Vishal is so stuck with his first (and probably only) hit that he refuses to move on. He keeps thinking he can recreate that success by casting himself in similar macho roles.

By the time Jayasurya ends, you'll actually feel sad for Vishal's entrapment. Because the second half of Jayasurya is quite nice. Nice enough to make you wonder what may have been if the first half hadn't been in Pandem Kodi mode (random comedy - loving family - terrible love story).

Jayasurya has Vishal playing an Assistant Commissioner of Police who is transferred to the Guntur district. There he eliminates the three supposed kingpins of crime in the city in the first half, and expects crimes to stop. However there is a twist in the tale and crime continues. How Jayasurya finds out who's behind the racket, and the resulting consequences, form the rest of the plot.

There is also a completely random track involving Kajal Aggarwal who appears in a couple of scenes so they can lead to three songs and waste around half an hour of the runtime and the entire first half. The first half is just a string of meaningless sequences strung together without any attempt at coherence or suspense. It is only after the interval that Jayasurya picks up, and despite a few more meaningless sequences, the cross-cutting story-telling and the emotionally charged pre-climax elevate the movie to a different level.

Vishal has been picking up some decent scripts in the recent past - Indrudu being a point in case. Jayasurya also had promise. Director Suseendhiran gives a realistic feel to the film, and the point of no-return and the devastation that the hero's family experience towards the end strike a chord. The fact that the director did not decide to bathe his hero in glory reiterates that fact that there was potential in the movie's script that was nipped in the bud in the first half.

Vishal has rarely done anything different in his films, and this one is no different. He still acts like he did in Pandem Kodi. As for Kajal Agarwal, this has to be her most inconsequential role ever. She's barely there for a few scenes, and her chemistry with Vishal is non-existent. Samuthrakhani acts really well, and is supremely believable in the role of a power-hungry guy who will not stop at anything. The remaining cast barely gets any footage.

The music is terrible, and you'll die a few deaths every time Vishal sings "Telugutanama, Telugutanama" in this dubbed product. The film is however technically decent, and features quite a few good stunts.

Jayasurya might have worked well if it had released at a low-profile time. It however faces tough competition at the box office this week, and might just end up being another of Vishal's long list of forgotten releases.
Share. Save. Connect.
Tweet
JAYASURYA SNAPSHOT 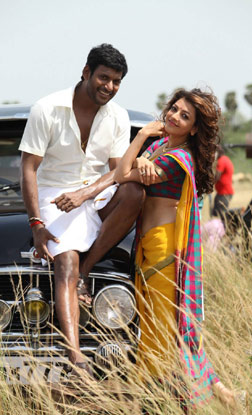 ADVERTISEMENT
This page was tagged for
Jayasurya telugu movie
Jayasurya reviews
release date
Vishal Krishna Reddy, Kajal Aggarwal
theatres list
Follow @fullhyderabad
Follow fullhyd.com on
About Hyderabad
The Hyderabad Community
Improve fullhyd.com
More
Our Other Local Guides
Our other sites
© Copyright 1999-2009 LRR Technologies (Hyderabad), Pvt Ltd. All rights reserved. fullhyd, fullhyderabad, Welcome To The Neighbourhood are trademarks of LRR Technologies (Hyderabad) Pvt Ltd. The textual, graphic, audio and audiovisual material in this site is protected by copyright law. You may not copy, distribute, or use this material except as necessary for your personal, non-commercial use. Any trademarks are the properties of their respective owners. More on Hyderabad, India. Jobs in Hyderabad.