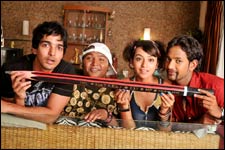 Karthik Pasupulate / fullhyd.com
EDITOR RATING
4.0
Performances
Script
Music/Soundtrack
Visuals
6.0
3.0
7.0
6.0
Suggestions
Can watch again
No
Good for kids
No
Good for dates
Yes
Wait to rent it
Yes
Youth-based films in Telugu cinema suffer from some innate contradictions. For one, the more they change, the more they tend to remain the same. Not surprisingly at all, Thakita Thakita does just that, while putting up a facade of being "out of this world".

The problem is that pretenses, however good, usually wear off, and the cookie starts to crumble just seconds into the film, as a 51 year-old Nagarjuna (formerly a "Yuva" Samrat himself) turns up to put things in perspective, introducing the unknown faces. Indeed, patronage in this part of the world is a different animal altogether.

Soon enough, Anushka walks in to make the second surprise appearance. Guess we're all suckers for the reassuring comforts that familiarity offers. At least, that is what our filmmakers seem to think.

As for the story, Sri, Chandana, Nandini, Kishore, Mahesh, Scud and Bhakti are a bunch of buddies together from school. Then, there's Jessica, a "firang" who stays as a paying guest at the rich Chandana's home.

Nandini loves Kishore, her senior. Her father, though, doesn't approve of their love. Mahesh and Scud have an old-boys' tiff going on between them because of which they can't stand each other.
Sri is madly in love with Chandana, but waits to settle down in life before declaring his love. Chandana is also in love with him, by the way. They both have a strong reason for playing dumb, which is actually the crux of the film - the message, rather.

There's also Dakshayini, who is also crazy about Sri and would stop at nothing to have her man. Then, there's Bhakti, a happy-go-lucky girl.

How these kids come of age, rising above the challenges life dishes out, makes up the rest of the predictable story. Of course, the flick does not stop at that. You cannot have a Telugu film about youth without a message, can you?

Thakita Thakita takes a stand on many burning issues facing the young today, including acid attacks on girls, suicides, misunderstandings and self-esteem issues. There's so much righteousness packed into the film that it might actually make the more sensitive ones among us cry.

The performances, along with the music, stand head and shoulders over everything else. Harshvardhan Rane (Sri) and Haripriya (Chandana) get the most footage, and do a pretty good job. Both look fresh, and have a comforting screen presence.

The rest of the newcomers do a decent job, but there's really not much to do. The writing is good in patches, as some jokes tickle your funny bones while the rest just fall flat.

The music is, perhaps, the brightest spot in the film. While there is that sense of d?j? vu at the back of your mind, Bobo Shashi's tunes leave you feeling nice.

The director, it seems relies on a combination of a lot of extreme close-ups and fancy editing to weave in some freshness, but it just does not come together. The film does look quite slick from the outside, but ends up a little too amateurish.

A few moments in the film (mostly the ones involving Sri and Chandana) stand out, but, all in all, it's more disappointing than inspiring. Watch it if you have to, best with a bunch of hooting, cat-calling gang of friends.
Share. Save. Connect.
Tweet
THAKITA THAKITA SNAPSHOT

See Thakita Thakita full details
THAKITA THAKITA USER REVIEWS
1 - 4 OF 4 COMMENTS
POSITIVE  |  NEGATIVE |  NEWEST  |  OLDEST  |  MOST HELPFUL  |  LEAST HELPFUL
USER RATING
7.0
3 USERS
Performances
Script
Music/Soundtrack
Visuals
7.0
7.0
7.7
7.0
Can watch again - Yes
Good for kids - Yes
Good for dates - Yes
Wait to rent it - Yes
Guru on 5th Sep 2010, 4:34am | Permalink
A lovable movie for every people to spend their time.. Director is really awesome.. Hats off to his team..
shiv on 5th Sep 2010, 3:36am | Permalink
this is a good entertainer movie.,, good music by music director BOBO SASHI and director has made a good attempt... take movies as an entertainment element and not anything else... this movie is good to watch.,.. worth ure money... guys pls watch once before u comment on anything,,, Director sree hari and kona venkat has made a good attempt... it may not be up to be a block buster but its one of its kind.... worth ure money...


Barthath and boomika thakur have made a good move... we expect more new ventures from u... long way to go...

ime sure the movie in will talk for its slef once u watch it...


millions might comment on it in a bad way but trust me its worth a watch.... u would agree to me once u watch the moive... its not a commercial movie.. but a good family entertainer.... u would love it!!!!!!!!


RATING
9
rajukona on 4th Sep 2010, 3:59pm | Permalink
Chala Chetta Ga Undi.
Early Watcher on 3rd Sep 2010, 7:28pm | Permalink
Thakita -2 is a very good film with brilliant Music, lot of positive energy being shown by youngsters, high production values and great Cinematography. Direction is average but still the movie stands out and is a must watch. The messaging part is Subtle...I am surprised how you didn't got any message. The biggest message of life is hidden in the movie and is explained in the climax scene. Unless we have a feeling of "WE", we can't rise from where we are....to get into WE we have to look within, search issues inside and fix them.

ADVERTISEMENT
This page was tagged for
Thakita Thakita telugu movie
Thakita Thakita reviews
release date
Harshavardhan Rane, Karthik
theatres list
Follow @fullhyderabad
Follow fullhyd.com on
About Hyderabad
The Hyderabad Community
Improve fullhyd.com
More
Our Other Local Guides
Our other sites
© Copyright 1999-2009 LRR Technologies (Hyderabad), Pvt Ltd. All rights reserved. fullhyd, fullhyderabad, Welcome To The Neighbourhood are trademarks of LRR Technologies (Hyderabad) Pvt Ltd. The textual, graphic, audio and audiovisual material in this site is protected by copyright law. You may not copy, distribute, or use this material except as necessary for your personal, non-commercial use. Any trademarks are the properties of their respective owners. More on Hyderabad, India. Jobs in Hyderabad.