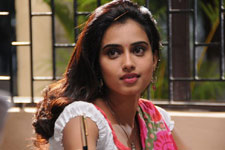 Pranita Jonnalagedda / fullhyd.com
EDITOR RATING
4.0
Performances
Script
Music/Soundtrack
Visuals
5.0
4.0
3.0
6.0
Suggestions
Can watch again
No
Good for kids
No
Good for dates
Yes
Wait to rent it
Yes
Mahesh had attracted the young audience with its mischievously done trailer, that generated some buzz, a while ago. However, this film reminds us of a certain "Kolaveri Di", that also drew audiences to what ultimately turned out to be a disappointment on the big screen.

Before we begin the story, let's set a few things straight:

1. No, the hero isn't called Mahesh.
2. This is the dubbed version of a Tamil film, Yaaruda Mahesh (which translates to "Yevadu Ra Mahesh" in Telugu - which seems like a more appropriate title).
3. This film is being "presented" by Telugu filmdom's latest double-entendre-filled movie specialist, Maruthi.
4. This may not interest you, but this is the 20th dubbed film in the Telugu industry this year, and interestingly, releases on the 20th too.

So the plot goes thus. Siva (Sundeep) is a lazy lad who leads a slapdash life, and is as careless as the wind. His sidekick, Vasanth (Jagan), is the victim of his vagabond ways, and always gets into trouble thanks to them.

As usual, the hero falls in love with the most popular "figure" in college, Sandhya (Dimple), who is also a brainiac. One day, she invites him home for breakfast when her parents are out This leads to aroused passions, and on the next day, Siva is seen wearing a T-shirt that says, "At last I did it". Sandhya wears a T-shirt that says something to that effect, too.

Soon, college is over, Sandhya becomes pregnant, and their parents get them hitched. But Siva is still reckless, and prefers to be the daddy at home while his wife goes to work.

But when he listens to a stray conversation of his wife over the phone - to her supposed paramour, Mahesh - his life changes. Now he has a "?" on his T-shirt, and we are all left to wonder who Mahesh is. The rest of the film is about the search for Mahesh, with Vasant in tow, and some quick wisecracks to support.

Though woven around a novel concept, Mahesh is an attempt that is constantly in search of direction. Just like Siva's character, the screenplay aimlessly wanders, especially in the first half. In a film where the viewer is already looking for some clarity, a contrived climax plays spoilsport.

While there are funny moments, they die out in a muddled plot. Most scenes bring laughter, as single entities, but when strung together, they amount to utter chaos. A few characters and scenes seem to have been added only to bring in some humour rather than for the sake of relevance.

To put it simply, the director's effort would have been more fruitful if the attention given to make up one-liners were given to the script.

Sundeep brings freshness into the character of a careless college student. Dimple looks beautiful as the lover girl, and graciously does what is required of her.

Jagan's role as the friend of the hero is the best performance in the entire film. His act makes you laugh. But after a point, all the humour starts to feel cheesy and irritating (who on earth keeps mistaking "bro" for "bra", "dude" for "nude", and a popular swear word for "duck"?). The rest of the cast is a notch above sufficient.

However, all the performances are frittered away due to a haphazard script and a superficial story.

Gopi Sunder's background score adds to the distress of this venture that is already suffering due to the after-effects of a catastrophic job. Meanwhile, cinematographer Rana's work is a notch above good. He brings life into the film, and makes even the murkiest of areas look picturesque. The songs, especially, feel like a job well-done.

Director Madan Kumar's effort shows a lot of promise. It might strike a chord with college students, but for the rest of us, this film might not be the best option this weekend.
Share. Save. Connect.
Tweet
MAHESH SNAPSHOT 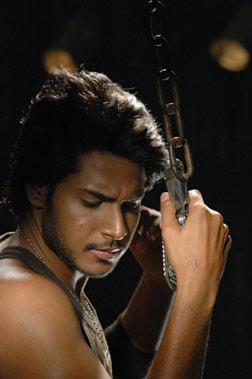 ADVERTISEMENT
This page was tagged for
Mahesh telugu movie
Mahesh reviews
release date
Sundeep Kishan, Dimple Chopade
theatres list
Follow @fullhyderabad
Follow fullhyd.com on
About Hyderabad
The Hyderabad Community
Improve fullhyd.com
More
Our Other Local Guides
Our other sites
© Copyright 1999-2009 LRR Technologies (Hyderabad), Pvt Ltd. All rights reserved. fullhyd, fullhyderabad, Welcome To The Neighbourhood are trademarks of LRR Technologies (Hyderabad) Pvt Ltd. The textual, graphic, audio and audiovisual material in this site is protected by copyright law. You may not copy, distribute, or use this material except as necessary for your personal, non-commercial use. Any trademarks are the properties of their respective owners. More on Hyderabad, India. Jobs in Hyderabad.