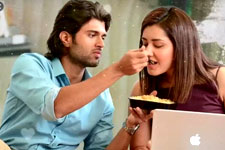 T J Reddy / fullhyd.com
EDITOR RATING
3.0
Performances
Script
Music/Soundtrack
Visuals
5.0
2.0
4.0
3.0
Suggestions
Can watch again
No
Good for kids
No
Good for dates
No
Wait for OTT
Yes
I remember the first time I saw the poster for Arjun Reddy. Not any poster, THE poster. A shot of Vijay Deverakonda's face. The long, curly, messy hair. The unkempt beard. The round shades. And a sense of calm oozing out which overpowered everything else that was going on in the poster. I saw that and thought to myself, "This is not an actor anymore, this man is a star."

World Famous Lover tells the story of Gautham (Vijay Deverakonda) and Yamini (Raashi Khanna). Gautham quit his high-paying corporate job to pursue writing. Yamini chose to support Gautham while he worked towards his dream. However, Gautham seemingly stopped working towards the goal and began sliding into a life of sloth. Yamini hurls insults at Gautham, Gautham hurls things on the ground, Yamini hurls their relationship in the bin, and Gautham hurls his feelings onto the page and begins to write. His subsequent work results in two storylines and a whole lot of writing tips.

Writer/director Kranthi Madhav chose to give his audience a few hints about the writing process. A fullhyd-er always pays his debts, and hence we decide to return the favour by offering pointers of our own.

Pointer 1: Write what you know

World Famous Lover comes into its own when depicting the lives of Srinu (Deverakonda again) and Suvarna (Aishwarya Rajesh), a fictional story written by Gautham. The Pati, Patni Aur Woh scenario they share with Smitha (Catherine Tresa) makes for an engaging drama about love and the gap in communication one has to bridge to connect to another's soul. This section of the film is brimming with subtext. It has a healthy dose of subtlety, too. The filmmaking screams of panache and personality. It becomes quite evident that this is Kranthi Madhav's home turf. He knows these characters, their conflicts, and the not-quite-urban Telangana milieu.

What he doesn't have a grasp on is Hyderabad and "modern love".

When you speak to a published author, a well-regarded journalist or a professional screenwriter, one of the first things they tell you is, "All writing is rewriting." They say this because the first draft of anything is hot garbage. The goal, when writing the first draft, is to throw out every idea you have on the page, stop, reassess, and see what sticks.

Kranthi Madhav's understanding of urban romance begins and ends with dated clichés and tropes more worn out than the pair of worn-out jeans I bought five years ago while fantasizing about how cool I'd look when wearing them. Let me assure you; I could not bear looking at myself in those pants once I made my way back home.

The character of Gautham tells the audience that he threw away ten entirely written novels as all of them lacked a soul. Kranthi Madhav throws ten films worth of ideas into one script, calls it a day, and films them without ever really exploring or developing any one of those ideas fully. It is a story that says a lot without saying anything of significance.

Pointer 3: Film is a visual medium. A novel and a screenplay aren't the same.

There is a reason many fans of the Fifty Shades Of Grey books weren't pleased with the cinematic renditions of their favourite poorly-written erotica. An apparent lack of explicit sexual intercourse notwithstanding, when you read a book, you bring your imagination into a world created only by words. Sweeping vistas, futuristic settings, or two sexy, naked people bumping uglies with each other are tailored to your tastes by your creativity. When making a film, every scene on the page needs translation into a visual medium. The vision must not only impress the filmmakers but also capture the imagination of an audience.

This movie fails at delivering on a visual aesthetic to an alarming degree. Every scene shot away from the quaint coal mining town of Yellandu lacks any sense of flair or momentum. Every setting the characters find themselves in looks as staged and contrived as the emotions they portray. Add to this the labored music provided by an off-color Gopi Sundar, and we have a recipe for an over two-and-half-hour sob fest that stumbles to the finish line even with an engaging leading man.

Speaking of leading men, Vijay Deverakonda has made an art of playing broken characters who look uber-masculine. However, like Mahesh Babu with Okkadu and Pawan Kalyan with Khushi, the power of one single film and one strong character has kept his acting career chugging along for the past few years. Arjun Reddy casts a long shadow on the man's career, and he needs a film and a filmmaker who has a story strong enough to pull him away from it. World Famous Lover is not that film, and Gautham is not that character. Srinu is, but isn't on screen long enough.

Three of the four female leads have very little to offer in terms of character work or acting. Audible laughter is a running theme when Yamini, Iza and Smitha are on screen. Aishwarya Rajesh shines in her role as Suvarna, but her contribution to the overall movie is far too brief a la Srinu.

Joining Suvarna and Srinu in the "characters we connected to" gang is Yamini's wealthy father. Right at the end of the film, he meets Gautham and says something to the effect of being sick and tired of his and his lady love's antics. He wishes that they do as they please and stay as far away from him as humanly possible.

When watching a romance, one should connect with either one or both central characters of the said romance. In an ideal world, we empathize with their struggles and sympathize when bearing witness to their pain. But we don't live in a perfect world and hence connected to the father who is sick and tired of watching this dated, contrived, loud, brash, unyielding, mind-numbing and tiring romance play out for a painstakingly long time.

The messy hair, the unkempt beard and all the extraneous noise are covering up Vijay Deverakonda's face. There is no sense of calm guiding our eyes to him anymore. Slowly but surely, the star in him fades, and he is on course to becoming just another in a sea of normalcy.

P. S. Do check out Nocturnal Animals for a better take of a similar concept.
Share. Save. Connect.
Tweet
WORLD FAMOUS LOVER SNAPSHOT 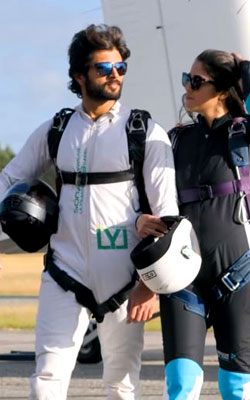 ADVERTISEMENT
This page was tagged for
World Famous Lover
world famous fullhuderanad
world famous lover hot sex
World Famous Lover telugu movie
World Famous Lover reviews
Follow @fullhyderabad
Follow fullhyd.com on
About Hyderabad
The Hyderabad Community
Improve fullhyd.com
More
Our Other Local Guides
Our other sites
© Copyright 1999-2009 LRR Technologies (Hyderabad), Pvt Ltd. All rights reserved. fullhyd, fullhyderabad, Welcome To The Neighbourhood are trademarks of LRR Technologies (Hyderabad) Pvt Ltd. The textual, graphic, audio and audiovisual material in this site is protected by copyright law. You may not copy, distribute, or use this material except as necessary for your personal, non-commercial use. Any trademarks are the properties of their respective owners. More on Hyderabad, India. Jobs in Hyderabad.