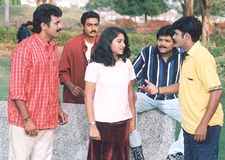 Arpan Panicker / fullhyd.com
EDITOR RATING
1.0
Performances
Script
Music/Soundtrack
Visuals
NA
NA
NA
NA
Suggestions
Can watch again
NA
Good for kids
NA
Good for dates
NA
Wait to rent it
NA
Some things in life make you a philosopher. Marriage is said to be one of them. Soggy underwear, another of these factors. This flick joins the band of factors that inspire muse!

Thanks to Amway, we have heard enough and more about the incredible figures advertising budgets amount to. This movie seems to have been made as part of the advertising strategy of Suzuki Fiero, as the movie is literally peppered with the bikes. Only, I guess the Suzuki guys spent just a fraction on this movie of what usually goes into their slick ads.

The rest of the movie, apart from the bikes that is, is a pain in the posterior, the interior, and all the places where a pain is a pain. Meaning to extol the virtues of friendship, the director ends up making a mockery of the youth in Hyderabad.

Balu (Shivaji), Dattu (Navin), Dumbu (Harsha) and Chanti (Ali) are good friends who loiter together. This is the way bonds are forged, I guess. They loiter from the beginning to the end, joined halfway by Siddhu (Rajiv), who rounds off the number to five. Romantic interludes followed regrettably by songs, gross attempts by Chanti at acquiring a girlfriend, and a general lack of direction in their lives keeps the friends busy (duh) till the interval.

Then there is a twist when the friends are arrested and beaten up because a girl Chanti is trying to patao gets kidnapped. Siddhu bails them out and the girl mysteriously stays kidnapped as the director forgets all about her.

Balu who has dollar dreams is planning to leave for the US of A. Last minute another twist, as Siddhu meets with an accident. Inspired by the ghost-to-ghost network used in The Three Investigators, the friends collect money for an operation, and all ends... it's just not in me to use 'well'.

Actors taken from TV serials, a director whose name biased me against him (someone with a name like Bunty just can't make good movies, and Friends is the proof!) and, of course, six songs that add to the overall agony of the viewer. Do yourself a favor and take the virtues of friendship for granted. Don't let anyone tell you about them!
Share. Save. Connect.
Tweet
FRIENDS SNAPSHOT

ADVERTISEMENT
This page was tagged for
Friends telugu movie
Friends reviews
release date
Shivaji, Ali
theatres list
Follow @fullhyderabad
Follow fullhyd.com on
About Hyderabad
The Hyderabad Community
Improve fullhyd.com
More
Our Other Local Guides
Our other sites
© Copyright 1999-2009 LRR Technologies (Hyderabad), Pvt Ltd. All rights reserved. fullhyd, fullhyderabad, Welcome To The Neighbourhood are trademarks of LRR Technologies (Hyderabad) Pvt Ltd. The textual, graphic, audio and audiovisual material in this site is protected by copyright law. You may not copy, distribute, or use this material except as necessary for your personal, non-commercial use. Any trademarks are the properties of their respective owners. More on Hyderabad, India. Jobs in Hyderabad.