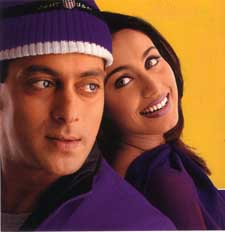 Pratima Agnihotri / fullhyd.com
EDITOR RATING
7.0
Performances
Script
Music/Soundtrack
Visuals
NA
NA
NA
NA
Suggestions
Can watch again
NA
Good for kids
NA
Good for dates
NA
Wait to rent it
NA
Kahin Pyaar Naa Ho Jaaye is indeed a film with a difference. Its hero Prem cries more copiously and drinks more heavily than the tragedy queen of yesteryears. In fact, Salman Khan as Prem can drown with his tears and beers even this lady of the Na Jaon Saiyan, Churake Baiyan fame. There is the small fact the lady performs both the activities much more artistically, but, like her, our hero, too, is trying to hold back the beloved who regularly breaks his heart.

The similarity ends there, though. The film is a rollicking comedy - only, its Shakti Kapoor version gets on your nerves. In fact, it must be the only pop film which dares to treat the great Indian icon, Devdas, with tremendous irreverence. Each time his heart is broken, Prem bores stiff his childhood buddy, Tiger (Jackie Shroff) who good-humoredly and patiently tolerates his drunken stupor. Equally supportive of this modern day Devdas is his sister's family, which treats him with indulgence each time the event with its seasoned regularity happens.

The way the film allows its sweet heroine to overshadow the embittered hero is another feather in its cap. And Rani Mukherjee as wholesome Priya sure excels herself. She looks gorgeous and literally lives the role of a good girl trying to help Prem overcome his depressed drunkenness. It's her kindness that gets her into "hearty" trouble, which her career crazy cousin Mona (Shilpa Shetty), ably helped by Tiger, helps her sort out.

By now you must have guessed that the story, which meanders like the gallis of old Hyderabad, is not much to write home about. Prem's sister has brought up her brother, who, in company with her husband and Tiger, sings songs at weddings. Madly in love with Nisha (Twinkle Khanna), Prem (an attempt to revive the HAHK magic) is a lost soul when she refuses to turn up at the wedding because she wants to marry richie rich Rahul Poongaliya whose money can save her cancer patient of a younger brother.

Next door neighbour Priya is all cute sweetness and goodness. Her sincere collaboration with his family in "Operation Devdas Control" makes him fall in love with her without realizing it. Her mother has fixed her marriage with rich guy Pungaliya, though. How all the misunderstandings are sorted out and the right man gets the right girl is worth a watch because, believe me, the "love(r)ly" denouement takes place up there in the air while your knuckles go white praying that the plane they all happen to board does not crash with the hectic activity they carry on while airborne.

Lovers' ways sure are airy, but the fairy tale ending the film provides gets dragged on unbelievably. The linear narration, in other words, should have been edited intelligently. The music is a saving grace, though. The acting is tolerable with the exception of Salman who is irritating, what with his all time favourite activities, undressing, getting drunk and weeping, and not necessarily in that order. In brief, watch the film for a good laugh, including a huge chuckle at Salman's expense.
Share. Save. Connect.
Tweet
KAHIN PYAAR NAA HO... SNAPSHOT
KAHIN PYAAR NAA HO JAAYE SNAPSHOT

ADVERTISEMENT
This page was tagged for
Kahin Pyaar Naa Ho Jaaye hindi movie
Kahin Pyaar Naa Ho Jaaye reviews
release date
Salman Khan, Rani Mukherjee
theatres list
Follow @fullhyderabad
Follow fullhyd.com on
About Hyderabad
The Hyderabad Community
Improve fullhyd.com
More
Our Other Local Guides
Our other sites
© Copyright 1999-2009 LRR Technologies (Hyderabad), Pvt Ltd. All rights reserved. fullhyd, fullhyderabad, Welcome To The Neighbourhood are trademarks of LRR Technologies (Hyderabad) Pvt Ltd. The textual, graphic, audio and audiovisual material in this site is protected by copyright law. You may not copy, distribute, or use this material except as necessary for your personal, non-commercial use. Any trademarks are the properties of their respective owners. More on Hyderabad, India. Jobs in Hyderabad.