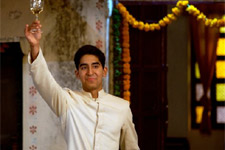 Nupur Barua / fullhyd.com
EDITOR RATING
7.0
Performances
Script
Music/Soundtrack
Visuals
8.0
7.0
7.0
6.0
Suggestions
Can watch again
Yes
Good for kids
No
Good for dates
Yes
Wait for OTT
No
John Madden, the director of this "alternative superhero movie" (because it is an ensemble cast and released abroad on the same day as The Avengers), The Best Exotic Marigold Hotel, said in a recent interview, "Clearly the film is a love letter to the country (India), but I didn't sentimentalise the place." What he does, instead, is give the audience a perspective of India through British eyes, without being too condescending, or sensationally romantic.

The Best Exotic Marigold Hotel is about a group of elderly British citizens, all of whom have personal and financial issues. Evelyn (Judi Dench) has to sell her house after the death of her husband, to settle debts. Douglas (Bill Nighy) and Jean (Penelope Wilton) have invested and lost all their savings on their daughter's Internet venture. Madge (Celia Imrie) does not want to be a permanent babysitter for her daughter's kids. Graham (Tom Wilkinson) decides, out of the blue, to just retire from his position as a judge. Norman (Ronald Pickup) is tired of trying to date younger women, who inevitably reject him because of his advanced years. Muriel is a racist ex-housekeeper, who needs a hip replacement, and her doctor thinks she should outsource the procedure.

All of them pick the Best Exotic Marigold Hotel for the Elderly and the Beautiful, a seemingly charming luxury heritage abode where one can spend the autumn of one's life, at least according to what it says on the Internet.

So they land up at this hotel, which turns out to be a decrepit mansion in ruins, run by the sincere Sonny (Dev Patel), who wants to do something worthwhile with his late father's property. His motto - everything will be all right in the end... if it is not all right, it is not the end.

As the elderly guests settle in and try to adjust to the heat, the dust, the traffic, the language, the food, and to the hotel, some of them realise that the best way to look forward is to leave the past behind, and to never give up hope.

This feel-good movie explores the misery and the helplessness of senior citizens who feel lost and unwanted towards the end of their life. India, then, is the best place to go to retain some of the dignity, forge new relationships, and maybe even fall in love again. Interspersed with the dry wit that the British are famous for, The Best Exotic Marigold Hotel is a fun watch, despite the pathos that one associates with tales of older people.

The Shakespeare In Love director hits the jackpot with his actors. Judi Dench becomes the default protagonist, because she maintains a blog on her life in the hotel. She brings in so much gravity to her role that you forget she is acting.

Bill Nighy is confident, patient and nervous, as his character demands. This must be a welcome relief from all the villainous and dark roles that he has portrayed recently. Celia Imrie and Ronald Pickup are kindred souls, somewhat - or at least their characters are. They play off each other perfectly.

Tom Wilkinson is stellar, as usual. Penelope Wilton is the most natural performer of the lot. And Maggie Smith excels in her portrayal of a white woman who has a problem with skin colour.

Dev Patel tries really hard to be a convincing Indian boy, and he almost succeeds. His "Indian accent" slips up at times, and he starts spouting British English. He is sincere, and endearing. Tena Desae as his girlfriend is promising. Lillete Dubey makes an impressive cameo, but the relationship between her screen son and her could have been a little more fleshed out. She becomes almost theatrical at times.

John Madden has got the look of a dilapidated Jaipur heritage hotel bang on. Production design is authentic, and costume design is sensible. The only glitch - if the telephone lines are not working, how come the Internet is (given that there seems to be no broadband or dongle, and definitely no smartphone)? 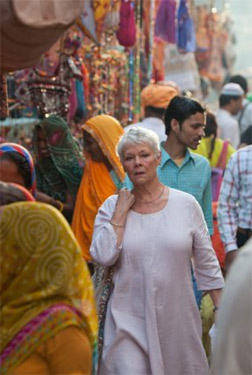 ADVERTISEMENT
This page was tagged for
The Best Exotic Marigold Hotel english movie
The Best Exotic Marigold Hotel reviews
release date
Judi Dench, Bill Nighy
theatres list
Follow @fullhyderabad
Follow fullhyd.com on
About Hyderabad
The Hyderabad Community
Improve fullhyd.com
More
Our Other Local Guides
Our other sites
© Copyright 1999-2009 LRR Technologies (Hyderabad), Pvt Ltd. All rights reserved. fullhyd, fullhyderabad, Welcome To The Neighbourhood are trademarks of LRR Technologies (Hyderabad) Pvt Ltd. The textual, graphic, audio and audiovisual material in this site is protected by copyright law. You may not copy, distribute, or use this material except as necessary for your personal, non-commercial use. Any trademarks are the properties of their respective owners. More on Hyderabad, India. Jobs in Hyderabad.