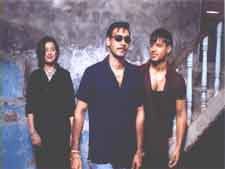 Arpan Panicker / fullhyd.com
EDITOR RATING
8.0
Performances
Script
Music/Soundtrack
Visuals
NA
NA
NA
NA
Suggestions
Can watch again
NA
Good for kids
NA
Good for dates
NA
Wait for OTT
NA
Company is the study of a supposedly fictitious gang that burgeons into a Mafia powerful enough to become a global network, and then falls when rifts occur within it. The powerful Mafia bit and the rift bit sound rather familiar in spite of the "All characters fictitious... any resemblance imaginary..." part. Hope the fall part is prophetic!

Malik (Ajay Devgan, who at last finds a role apart from the brooding lover one that he fits right in) is the right hand man of Aslam bhai, who, for lack of a better word, is a bhai (not to be confused with the Dubai-ka-chashma-cheen-ki-chaddi one - we are serious here). Malik in turn hires Chandu (Vivek Oberoi, in a debut as impressive as one could ask for) as his right hand man. Chandu, instead of hiring a right hand man, gets married to Kannu (Antara Maali, with an impressive portrayal of a role whose difficulty lies in the simplicity of the character). Malik isn't married, but lives in with Saroja (Manisha Koirala, playing the only character that isn't defined so well).

Now that the hiring and pairing part is over, the violence starts. Malik takes over the gang's activities and, using a series of murders and negotiations, elevates the 'gang' to a 'Company'. The work of establishing the Company goes on as deals in real estate go hand in hand with extortion and contract murders. Opponents and any others who happens to get in the way are knocked off. A couple of poor guys get shot just 'cos they are mistaken for some other 'targets'.

In the midst of this chaos enters Commissioner of Police Srinivasan (Mohan Lal in a role that "simbly wond be forgodden"!). Thick accent, pudgy face and a cute smile, not exactly the tough-as-nails cop one would expect. But he creates enough trouble for the Company for them to flee to Hong Kong, which they make their base. Business continues, and the Company gets more and more notorious.

Srinivasan gets a lucky break when Malik and Chandu have a disagreement caused by a series of events and a couple of misunderstandings. They part ways, and a few more misunderstandings later, are out for each other's blood. Both sides lose many men, and the movie draws to an end after some shocking twists and a climax that is the cinematic equivalent of a bucket of cold water... taa-daa!

The de-glorifying of violence has been attempted numerous times, but never has the execution been so stylish and shocking. Graphic violence is used as part of a faithful narrative, not for any sadistically voyeuristic tendencies. One can only gasp at the casual way that death is bartered by characters who have been brought to life by superb actors.

Smart dialogues put in to prove a point fit the characters like a suit from Saville Row. The background music, by Sandeep Chowta, accentuates the tone of the scenes (that "Ganda Hai Par Dhanda Hai" number finally makes sense!). With only two songs, an item number by Urmila during the titles and one more by a sultry Isha Koppikar twenty minutes into the movie, the narrative isn't disturbed. But the master of the piece is Ram Gopal Verma, who has once more pulled it off! With powerful performances, especially from the three lead actors, Company turns out to be a masterpiece you won't forget in a hurry.
Share. Save. Connect.
Tweet
COMPANY SNAPSHOT

Could you please put me in touch with your marketing manager? I have a special request to formulate.

RATING
6
Shorty Playa on 15th Oct 2002, 7:39am | Permalink
Straight gangsta
RATING
10
Naneh Zakas on 14th Sep 2002, 1:02am | Permalink
Heavyyyyyyyyyyyyyyy film, khalas dangerous!!
RATING
10
Madhu Madhu on 1st Aug 2002, 12:57pm | Permalink
i won 150 crore on this film thank u
RATING
6
Shaun Ali3 on 4th Jul 2002, 12:01pm | Permalink
thats da 1 n only movie(like documentry)
RATING
10
Yahya Ahmed on 9th Jun 2002, 1:29am | Permalink
Exelent movie
RATING
10
Jai Chandra on 5th Jun 2002, 9:45pm | Permalink
Very good
RATING
8
Anannd Kalmadi on 27th May 2002, 11:01pm | Permalink
after a long long time, I saw this hindi movie. At the end, one realizes that it was worth watching this movie for one thing, that is good acting by Oberoi and Mohanlal.
RATING
8
Arnab Banerjee on 22nd May 2002, 5:01pm | Permalink
the most professional and realistic hindi movie i have seen in a loooooooooooong time !
RATING
8
Sony Negi on 14th May 2002, 5:25pm | Permalink
i like company very much.because it is very different movie as ramu is very brilliant director.everybody has done very good acting speacilly vivek oberoi.he is my fav.actor i like him very much.
RATING
10
Mehul Parakhiya on 10th May 2002, 1:32pm | Permalink
I like the Movie " C o m p a n y " most , all actors/actresses play their roll too good in the life time chandu(vivek oberoi)is the best nucomer of the year after all ramu is ramu
RATING
10
Chitra Sharma on 10th May 2002, 2:08am | Permalink
I'm from canada..this movies hot..hollywood as a gangster hit that everyone can remember word for word.... its called scarface. Al Pacino is the star thug...i love vivek he did an exceptional job, different from all those new stars in tight clothes and girls hanging from their arms......
RATING
10
Khlkij Ljkhlkjh on 23rd Apr 2002, 3:33am | Permalink
The ending could have been better
RATING
8
Abinu Paul on 22nd Apr 2002, 6:57pm | Permalink
Mohanlal's just a genius.
RATING
10
Avinash Kumar on 20th Apr 2002, 11:43am | Permalink

ADVERTISEMENT
This page was tagged for
Company hindi movie
Company reviews
release date
Ajay Devgan, Vivek Oberoi
theatres list
Follow @fullhyderabad
Follow fullhyd.com on
About Hyderabad
The Hyderabad Community
Improve fullhyd.com
More
Our Other Local Guides
Our other sites
© Copyright 1999-2009 LRR Technologies (Hyderabad), Pvt Ltd. All rights reserved. fullhyd, fullhyderabad, Welcome To The Neighbourhood are trademarks of LRR Technologies (Hyderabad) Pvt Ltd. The textual, graphic, audio and audiovisual material in this site is protected by copyright law. You may not copy, distribute, or use this material except as necessary for your personal, non-commercial use. Any trademarks are the properties of their respective owners. More on Hyderabad, India. Jobs in Hyderabad.