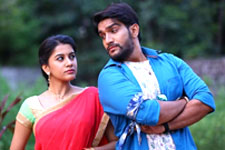 T J Reddy / fullhyd.com
EDITOR RATING
1.5
Performances
Script
Music/Soundtrack
Visuals
2.0
1.0
2.0
4.0
Suggestions
Can watch again
No
Good for kids
No
Good for dates
No
Wait for OTT
No
Many filmmakers don't seem to have moved along with the times. How else can anyone explain a movie like Ego that damn near uses every single cinematic trope in the least appealing and original way possible? The movie is so ill-conceived that it actually makes you long for equally ridiculously titled movies like Temper, Hyper and Loafer mostly because at least many of them have some sense of story-telling and presentation.

Ego begins at Amalapuram and chronicles the lives of Gopi (Aashish Raj) and Indu (Simran Sharma). Gopi is your run-of-the-mill worthless youngster who carries with him an inflated ego, and Indu is the village belle that rejects him initially but has a latent love for him owing to his stalker-ish ways. Gopi's and Indu's families have their differences which lead Indu's father finding her an NRI alliance. Gopi's ego is hurt by this, and makes him go to Hyderabad - not to make something of himself by working hard instead, but to find a "hotter" girl to get with and make Indu jealous in the process.

Gopi's endless search for an attractive mate helps him realize that it is Indu he has in his heart. He decides to go back to Amalapuram to express his love. Meanwhile, Indu realizes she is in love with Gopi, too, and abandons her wedding to travel to Hyderabad.

All the clichés and lack of fun mentioned above take one full half to complete, and Ego is perhaps the only film ever to have all its three acts in the second half. This half has the poor man's version of Ajith's Kadhal Kottai / Prema Lekha, a murder mystery involving one of the many women Gopi tries to seduce, something about the police abusing their power, Indu getting kidnapped, and finally the good guys fighting a drug trafficking ring.

Ego looks like the toy you would get when you give a child Lego pieces that look like arms, legs and a head with no torso to connect them all to. The child has no idea where what goes, and hence jams all the pieces together to create an abomination that begs to be destroyed as soon as it has been conceived.

On second thought, maybe it would be underestimating children by equating them to these filmmakers. Many of those young hands have been responsible for some truly magical things, which is more than can be said for this heartless, checklist filmmaking.

The mediocrity and/or straight-up awfulness doesn't end there. Lead actors Ashish Raj and Simran Sharma offer precious little in terms of memorable performances because they have been given zilch in terms of good direction and three-dimensional writing. You can see the duo standing in front of director Subramanyam asking him, "Please sir, can we have some more character?" And Ajay, Rao Ramesh, Posani Krishna Murali, Shakalaka Shankar and so many more seasoned actors will need to wash the aftertaste of this movie out by gargling some industrial strength Listerine.

The music is wholly forgettable and generic. Like those recycled plot points and tropes, the film's songs and score are all reminiscent of plenty of movies that came before it. To its credit, the film is fairly competently shot, though that is grasping at straws to say something positive.

One of the scenes in the movie has a poster of Baahubali 2 in the background, and will make you wish you were watching that one again. Unlike Ego, Baahubali 2 understood that it had to revamp its presentation, attach a bunch of frills, explore creative story-telling and hang a cluster of bells and whistles to its basic retelling of Hamlet to make itself more appealing to modern audiences. S S Rajamouli understood what ad filmmakers came to grips with ages ago.

Ego, on the other hand, finds solace in telling age-old stories in age-old methods. It hurts your ego.
Share. Save. Connect.
Tweet
EGO (TELUGU) SNAPSHOT 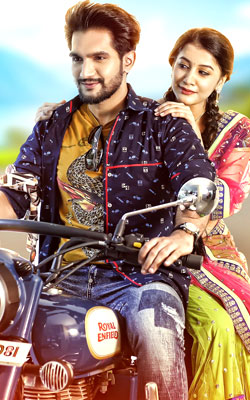 ADVERTISEMENT
This page was tagged for
EGo Telugu
Ego (Telugu) telugu movie
Ego (Telugu) reviews
release date
Aashish Raj Bidkikar, Diksha Panth
Follow @fullhyderabad
Follow fullhyd.com on
About Hyderabad
The Hyderabad Community
Improve fullhyd.com
More
Our Other Local Guides
Our other sites
© Copyright 1999-2009 LRR Technologies (Hyderabad), Pvt Ltd. All rights reserved. fullhyd, fullhyderabad, Welcome To The Neighbourhood are trademarks of LRR Technologies (Hyderabad) Pvt Ltd. The textual, graphic, audio and audiovisual material in this site is protected by copyright law. You may not copy, distribute, or use this material except as necessary for your personal, non-commercial use. Any trademarks are the properties of their respective owners. More on Hyderabad, India. Jobs in Hyderabad.