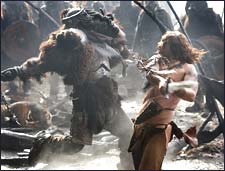 Samrat Sharma / fullhyd.com
EDITOR RATING
5.0
Performances
Script
Music/Soundtrack
Visuals
NA
NA
NA
NA
Suggestions
Can watch again
NA
Good for kids
NA
Good for dates
NA
Wait to rent it
NA
Ah, you thought Pathfinder was just another by-the-numbers action flick with some swordplay, which will obviously be terrible, and a listless, forgettable film? Well, you weren’t exactly wrong, but it isn’t just another film – it’s got one hell of a pedigree.

The film is based on a splendid, though underrated, comic mini-series of the same name, shares a large part of its second half with a Norwegian film called Veiviseren (also meaning Pathfinder, wouldn’t you know) which was incidentally nominated for an Oscar, and despite whatever you read on the Internet, it is based on a known historical hypothesis.

Add to this mix a Conan The Barbarian like hero, lots of blood and gore, cinematography and art direction that make it look like a fantasy painting or videogame, and freaking Vikings, for crying out loud, and you thought the director would have the good sense to direct it cleanly, and let it be a good, clean action film.

But director Marcus Nispel positively abhors the very idea of directing a comprehensive, clean action sequence. He directs in a chaotic, claustrophobic style that does not let us make any sense of the proceedings on screen, and only stops to take a breath at the quiet, beatific moments.

In an initial raid of the North Americas, the Vikings leave behind a young boy. The boy is raised by a native Red Indian tribe, and grows up to be a man who has embraced their culture, but is still overwhelmed by his past. When the Vikings return and pillage his village (ha!), the man, Ghost, must fight the invaders and avenge his tribe’s annihilation. Thrown in is the neighboring tribe’s shaman, who they all call Pathfinder, and his daughter, whom Ghost must protect.

The problem starts when you look at the writing credits of the film. Both the creator of the original graphic novel and the screenplay writer of the original Norwegian film are credited, but there is no mention of a screenplay writer for this film. In all likelihood, then, Nispel dragged his entire cast and crew to the British Columbia armed only with a graphic novel and a DVD.

That still wouldn’t have been a bad start, but Nispel is only bothered by setting up the visual style of the film. All sort of dialog, character arcs, story and performances are eschewed in favor of the next cool vista shot. Even then, he spends so much time oversaturating the whole film and putting in unnecessary environmental effects, it all ends up looking the same all over the place.

It gets worse in the action sequences. It is nearly impossible to tell what is happening, and most of the action has a chaotic, messy style that succeeds only in giving us a headache. It’s a revenge film where a man must fight his enemy in the jungles. If Sunil Shetty can do that in something legible, so can you. But no, Nispel thinks of himself as some sort of a visionary, boldly holding forth in his confused style of shot selection.

The dialog doesn’t help any, either. It is mostly shopworn and tired, but also plain irksome in some places, as it is breaking up the action in the most crucial stages of the film. The slow, meandering dialog really does not let the film gather any pace, and when it does, you have rolled your eyes once more than enough already.

So, yeah, it is a sad, forgettable film, it’s just that it didn’t deserve to be. It had one hell of a pedigree, a great premise, and perfect timing for a gory sword hacking action flick to be let loose on us. If it had the good sense to be just a straightforward action film, it would have been a cult classic. As it stands now, it’s just a gory, bloody mess.
Share. Save. Connect.
Tweet
PATHFINDER SNAPSHOT

ADVERTISEMENT
This page was tagged for
Pathfinder english movie
Pathfinder reviews
release date
Karl Urban, Russell Means
theatres list
Follow @fullhyderabad
Follow fullhyd.com on
About Hyderabad
The Hyderabad Community
Improve fullhyd.com
More
Our Other Local Guides
Our other sites
© Copyright 1999-2009 LRR Technologies (Hyderabad), Pvt Ltd. All rights reserved. fullhyd, fullhyderabad, Welcome To The Neighbourhood are trademarks of LRR Technologies (Hyderabad) Pvt Ltd. The textual, graphic, audio and audiovisual material in this site is protected by copyright law. You may not copy, distribute, or use this material except as necessary for your personal, non-commercial use. Any trademarks are the properties of their respective owners. More on Hyderabad, India. Jobs in Hyderabad.