The Closer You Get Review 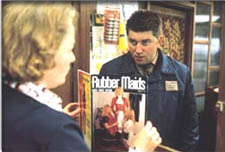 Avishek Gupta / fullhyd.com
EDITOR RATING
5.0
Performances
Script
Music/Soundtrack
Visuals
NA
NA
NA
NA
Suggestions
Can watch again
NA
Good for kids
NA
Good for dates
NA
Wait to rent it
NA
There's something definitely Full Monty-ish about this flick. There you have a couple of simpletons trying to gain self-respect and recognition in society with their outlandish humor. And here we have a couple of simpletons trying to find perfect mates with their equally outlandish humor.

'The Closer You Get' is one of those feather-light romantic comedies that's pleasant to watch but not likely to stick in the mind long after the end credits have rolled. It's a welcome distraction, but not much more.

Of course, all of the characters in this film are eccentrics, but that's only to be expected. The movie focuses on the romantic trials and tribulations of a group of young men living in a small, out-of-the-way village. They meet every night in the pub to bemoan the lack of attractive, eligible women in their town.

This sort of talk obviously doesn't go over well with the members of the opposite sex. Oddly, with the exception of the pub owner, no one seems to be married. In fact, the local priest, who is new to the district, has never performed a wedding.

Eventually, bitten by the romance bug, the men perform an act out of desperation. Led by their ring-leader, Kieran O'Donnagh (Ian Hart), who is said to have "the constitution of an ox and the wits to match", they decide to place an ad in a Miami newspaper trumpeting the assets of their village and its men for any adventurous American women who would like to cross the ocean and get married. Then, to the amusement of the local womenfolk, they sit back and await the arrival of their potential brides.

Overall, there's been plenty better and plenty worse. If you're curious to see self-respect run amok in the Irish countryside, catch a cheap matinee show or wait for the video.
Share. Save. Connect.
Tweet
THE CLOSER YOU GET SNAPSHOT

ADVERTISEMENT
This page was tagged for
The Closer You Get english movie
The Closer You Get reviews
release date
Ian Hart, Sean McGinley
theatres list
Follow @fullhyderabad
Follow fullhyd.com on
About Hyderabad
The Hyderabad Community
Improve fullhyd.com
More
Our Other Local Guides
Our other sites
© Copyright 1999-2009 LRR Technologies (Hyderabad), Pvt Ltd. All rights reserved. fullhyd, fullhyderabad, Welcome To The Neighbourhood are trademarks of LRR Technologies (Hyderabad) Pvt Ltd. The textual, graphic, audio and audiovisual material in this site is protected by copyright law. You may not copy, distribute, or use this material except as necessary for your personal, non-commercial use. Any trademarks are the properties of their respective owners. More on Hyderabad, India. Jobs in Hyderabad.