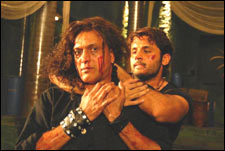 Deepa Garimella / fullhyd.com
EDITOR RATING
2.5
Performances
Script
Music/Soundtrack
Visuals
2.5
2.0
2.5
2.0
Suggestions
Can watch again
No
Good for kids
No
Good for dates
No
Wait to rent it
No
Drona is the kid of 2 loving parents (Mukesh Rishi and Sita). One day, he gets punished by his dad, and runs away from home. Years later, he grows up to be Nitin. Unofficially, this review ends here. Officially, however, here goes the rest of it.

Drona is part of a large gang responsible for robberies across 3 states. One day, he bumps into his parents' car on purpose, and without revealing his real identity, makes them take him home on the pretext that his hand has been injured in the accident. This results in some touching scenes involving him and his mother, but mainly involving him and his neighbour (Priyamani), who indeed touch each other a lot.

Towards the interval, Drona's real identity is revealed, and everyone is immensely happy. But why does Drona not reveal things himself? What is the past he is hiding from everyone? How come Drona's dad is a police officer but couldn't trace his own missing child? Why is his mom so dense she can't recognize her son until someone tells her about the stupid tattoo on his arm? Even as you discover that a question mark has an IQ higher than that of this movie, Drona is arrested by the police, thanks to his own network.

In prison, Drona narrates his flashback to his shell-shocked parents. As a kid, Drona was actually kidnapped along with his friend, by the evil Sarkar (Kelly Dorjee), who takes them to a jungle on some faraway island. There, about a 100 kids are being trained to shoot, fight and evade laser-activated alarms. After many years of this training, Drona and 2 others, the most skilled of the batch, are asked to steal using their skills. They are appalled at this. Probably they thought they were at a yoga camp or something.

Sarkar tempts them by saying that the whole lot will be free to go back to their families, once Drona and his friends do his bidding. In order to make sure they return to the jungle, Sarkar injects them with a micro-capsule that is timed to blow up after 24 hours. At this point, we're ready for a micro-capsule ourselves. Please just send the makers of this film back to the jungle where they came from.

After their mission, Drona and his friends return to the island, where some surprises are waiting for them. Firstly, Rakhi Sawant is doing an item song in which she takes vulgarity to new levels, even by jungle standards. Secondly, Sarkar is planning to blow up the island.

After some corny blood-spattering and limb-crunching, not to mention resourceful bomb-hunting and ingenious stolen-jewellery-hiding, something happens. Exactly what, we don't know. But the flashback ends soon after, and we're back to the present. How the villains are caught by the police and Drona is released from prison, forms the rest of the proceedings.

Drona is the kind of film that makes 3 minutes feel like 3 hours. Aided by some atrocious dubbing, lazy performances and a hellishly crazed-up script, this turkey doesn't exactly have the masses cheering - even when Ms Sawant appears on screen with green and silver draping her essential contours. Some of the stunts are dumb-founding and poorly shot, like the one where Nitin shoots down a helicopter.

It is only Sita who gives a performance worth even talking about, and possibly, Nitin too. Priyamani's there only for the songs. The "villains" don't appear the least bit scary. As for comedy tracks, there's one with Sunil enduring people calling him a buffalo and other related things, and another with Venumadhav that the man looks barely interested in.

On the whole, Drona is a film you'd rent only if you have a fire extinguisher wherever you're watching it.
Share. Save. Connect.
Tweet
DRONA (TELUGU) SNAPSHOT

ADVERTISEMENT
This page was tagged for
Drona Telugu movies
drona tellgu movie
Drona (Telugu) telugu movie
Drona (Telugu) reviews
release date
Follow @fullhyderabad
Follow fullhyd.com on
About Hyderabad
The Hyderabad Community
Improve fullhyd.com
More
Our Other Local Guides
Our other sites
© Copyright 1999-2009 LRR Technologies (Hyderabad), Pvt Ltd. All rights reserved. fullhyd, fullhyderabad, Welcome To The Neighbourhood are trademarks of LRR Technologies (Hyderabad) Pvt Ltd. The textual, graphic, audio and audiovisual material in this site is protected by copyright law. You may not copy, distribute, or use this material except as necessary for your personal, non-commercial use. Any trademarks are the properties of their respective owners. More on Hyderabad, India. Jobs in Hyderabad.