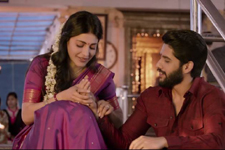 Ravi Kandala / fullhyd.com
EDITOR RATING
6.0
Performances
Script
Music/Soundtrack
Visuals
7.0
6.0
5.0
7.0
Suggestions
Can watch again
No
Good for kids
Yes
Good for dates
Yes
Wait for OTT
No
This writer was reminded of Ranbir Kapoor innumerable times while watching Premam today. The particular visual that played out was that of Ranbir lip-syncing lustily to Sadda Haq or Nadaan Parindey or even the latest rage Bulleya. The veins in Ranbir's neck stick out as he feigns belting, and even though we know that the voice belongs to someone else, we are more than inclined to believe that he's the one singing.

Naga Chaitanya, on the other hand, does not open his mouth more than a smidgen. The line in the song could be a softly murmured one or a high-pitched one - his mouth will not open and there will be no strain on his face when he's lip-syncing it. It just serves to disconnect the viewer from the song. How we wish he would learn that the simple act of actually singing out a song while shooting would probably really make his performance that much more believable.

Premam, the remake of the runaway Malayalam hit of the same name, has several typical Telugu cinema touches added to it. To be fair, we will not bring comparisons with the original into this review. The film is the story of Vikram aka Vicky (Naga Chaitanya) and his love stories at various stages of his life.

[WARNING: SPOILERS AHEAD] Premam works in parts. The first love story is too short to be taken seriously - it is clearly a case of infatuation and the kind of heartbreak that you are told Vikram goes through after this one rings false. However, the subsequent portions with Vikram's new bearded avatar, Venkatesh making a surprise appearance as his uncle, and the love story with Shruti Hassan put the movie back on track. The entire college sequence plays out nicely enough to keep the audiences engaged. The final love story is wrapped up in a hurry, but comedian Srinivasa Reddy does enough in these portions to keep you engaged. Director Chandoo Mondeti adapts the soul of the Malayalam original and adds his own embellishments to make the flick palatable to Telugu audiences.

Naga Chaitanya overplays the schoolboy part with awkward mannerisms, but more than makes up for it with the other two portrayals. He's clearly something of a heartthrob now considering the number of girls who whipped out their cell phones to record his entry scene in his bearded look. Anupama Parameswaran gets a miniscule role while Shruti Hassan tones her urban girl down quite a bit and does well. Madonna Sebastian fails to impress with both her looks and her acting skills. The remaining support cast including Praveen, Krishna Chaitanya and Srinivasa Reddy provide very able support.

The film is fine technically. Only a couple of the songs register - the essence of the original tunes seems to be lost in translation.

Premam is fun in bits and parts, but is entertaining on the whole. Also, it is clean - no vulgarity, no gory action - making it almost an ideal vacation watch with your full family.
Share. Save. Connect.
Tweet
PREMAM SNAPSHOT 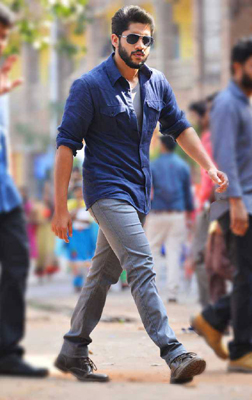 See Premam full details
PREMAM USER REVIEWS
1 - 1 OF 1 COMMENTS
POSITIVE  |  NEGATIVE |  NEWEST  |  OLDEST  |  MOST HELPFUL  |  LEAST HELPFUL
USER RATING
8.0
2 USERS
Performances
Script
Music/Soundtrack
Visuals
NA
NA
NA
NA
Can watch again - NA
Good for kids - NA
Good for dates - NA
Wait for OTT - NA
Booyakasha on 18th Oct 2016, 11:04am | Permalink
By now we all know that the original has attained cult status in Kerala. Then, with the grand success of the film, came in a huge nuisance for the high schools and colleges in the state. Crazy students were bunking their classes to watch the film which resulted in severe delays in the academic schedule. To control this menace, the Kerala government quickly implemented “Operation Gurukulam” to catch the students at the cinema halls and send them back to schools and colleges.

So going into this one I had to keep telling myself to shut the original (which I’ve watched 10+ times!) out of my system. And I came out being thoroughly satisfied with a smile on my face. Good job done by the Telugu Premam team. They’ve managed to deliver slightly different textures and flavours in this hearty meal which really worked for me. Chaitanya has really grown as an actor. Aparna was looking more beautiful than the Mal version and Madonna too was more stylish. Both girls knew what they were doing and played their parts well. The social media backlash over Shruti’s selection for Pallavi’s role notwithstanding, I think the former held her own and put up a good show. The comedy dept did a splendid job too. All of them. Few negatives for me were none of the actors could pull off teenage mannerisms convincingly. The expressions and even the comedy bits in the 1st story look forced. Nivin (in the original) totally rocked this. He reduced 6 kgs to get the look and body language of a teenager perfectly. All-in-all a good light-hearted romcom worth watching.
RATING
7
LEAVE A COMMENT
fullhyd.com has 700,000+ monthly visits. Tell Hyderabad what you feel about Premam!
MORE MOVIES
Latest Reviews
Michael
Hunt
Pathaan
Waltair Veerayya
Veera Simha Reddy
more
Top Gear
18 Pages
Dhamaka
Connect (Telugu)
Avatar: The Way of Water
Panchathantram
Gurtundha Seetakalam
Violent Night
Matti Kusthi
HIT: The 2nd Case
Contemporary Reviews
Abhinetri
Mirzya
Eedu Gold Ehe
Miss Peregrine's Home for Pe...
Anna (Hindi)
more
Best Of Luck (Hindi)
Beiimaan Love
Tutak Tutak Tutiya
Queen Of Katwe
Jaguar
Nee Jathaleka
M.S. Dhoni: The Untold Story
M.S. Dhoni: The Untold Story...
Hyper
Random Reviews
Bride Of Chucky
Shanghai Knights (Hindi)
Avuna
Devi Putrudu
Ek Khiladi Ek Haseena
more
United 93
Flags Of Our Fathers
Aloo Chaat
Iron Man 2
Double Dhamaal
Prometheus (Hindi)
Action (3D)
The Post
Pailwaan (Tamil)
Urvasivo Rakshasivo
SEARCH MOVIES
Dissatisfied with the results? Report a problem or error, or add a listing.
ADVERTISEMENT
SHOUTBOX!
{{todo.name}}
{{todo.date}}
[
ip{{todo.ip}}
]
{{ todo.summary }}... expand »
{{ todo.text }} « collapse
First  |  Prev  |   1   2  3  {{current_page-1}}  {{current_page}}  {{current_page+1}}  {{last_page-2}}  {{last_page-1}}  {{last_page}}   |  Next  |  Last
{{todos[0].name}}

ADVERTISEMENT
This page was tagged for
premam telugu movie
premam telugu 720p full
Premam telugu movie
Premam reviews
release date
Follow @fullhyderabad
Follow fullhyd.com on
About Hyderabad
The Hyderabad Community
Improve fullhyd.com
More
Our Other Local Guides
Our other sites
© Copyright 1999-2009 LRR Technologies (Hyderabad), Pvt Ltd. All rights reserved. fullhyd, fullhyderabad, Welcome To The Neighbourhood are trademarks of LRR Technologies (Hyderabad) Pvt Ltd. The textual, graphic, audio and audiovisual material in this site is protected by copyright law. You may not copy, distribute, or use this material except as necessary for your personal, non-commercial use. Any trademarks are the properties of their respective owners. More on Hyderabad, India. Jobs in Hyderabad.