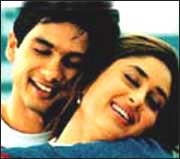 Deepa Menon / fullhyd.com
EDITOR RATING
5.0
Performances
Script
Music/Soundtrack
Visuals
NA
NA
NA
NA
Suggestions
Can watch again
NA
Good for kids
NA
Good for dates
NA
Wait for OTT
NA
The average age of the audience at the first day, first show of Fida was around 22. Now if that was also the average IQ, Ken Ghosh might have lucked out. But it was not to be. And another one bites the dust.

Shahid Kapoor plays a filthy rich dealer of imported cars, apparently a profession he's dabbled in since the age of four when his parents died. Jai (Kapoor) has nobody in the world except for his best friend (Sharma), whose heated professions of love he calmly ignores. He is waiting for the girl of his dreams, and she's waiting for him behind a flock of flying pigeons. In a burst of original screenplay and bright chiffon, Kareena Kapoor emerges looking suddenly older than usual.

Not her fault. Shahid Kapoor makes most everyone look ancient. But don't let the pubescent charm fool you, this is one persistently deranged lover. Neha (Kareena) refuses to run into his arms and declare her love the first time they meet, despite his asking her nicely. So he carves her name on his arm and tries to kill himself.

Convinced that this is the kind of stable relationship she's looking for, Neha falls in love with Jai. And everything is fine till the mafia comes a-calling, to settle some old dues. To pay them off and save his girlfriend's life, Jai tries to steal Rs. 6 crores from Vikram (Fardeen Khan). Vikram turns out to be a hacker who illegally transferred funds from the account of a mafia don to his own personal Swiss bank number. (Note: This can be accomplished from any sufficiently cool-looking desktop, using the MS-DOS command 'hack'.)

Jai strikes a deal with Vikram, and promises to turn himself over to the police as the most-wanted Internet thief, in return for the 6 crores. But things never work out the way we plan. An angered mafia-don will turn vindictive, a once-innocent hero will get his hands dirty, and a once-faithful heroine will take a shower with the other guy. And God said: let there be intermission.

Fida changes tracks and gets dark, post-interval. At least, that's what you hope as you go off to get popcorn. After Jai discovers that he's been had by the love of his life, he does the revenge act. But instead of coming back stronger, meaner, tougher, he comes back well, exactly like he left. So he gets beaten up a great deal by Vikram. On the one hand, he makes chilling phone calls and plays the terrifying stalker, and on the other, he stands around getting steadily pounded. It doesn't add up, and the movie's unconventional-though-thoroughly-predictable ending does little to redeem its patchy plot.

The director is one terribly confused man. His characters have no compelling motives, and his script keeps falling over its own feet. As a result, his actors mostly just stand around and look like they're waiting for further instructions.

There was some hope for Fida, simply because it attempted something different. But the attempt is so half-hearted, and the clichés are retained so tenaciously, that the hope does not survive. Watch this movie for the popcorn.
Share. Save. Connect.
Tweet
FIDA SNAPSHOT

ADVERTISEMENT
This page was tagged for
Fida hindi movie
Fida reviews
release date
Shahid Kapoor, Fardeen Khan
theatres list
Follow @fullhyderabad
Follow fullhyd.com on
About Hyderabad
The Hyderabad Community
Improve fullhyd.com
More
Our Other Local Guides
Our other sites
© Copyright 1999-2009 LRR Technologies (Hyderabad), Pvt Ltd. All rights reserved. fullhyd, fullhyderabad, Welcome To The Neighbourhood are trademarks of LRR Technologies (Hyderabad) Pvt Ltd. The textual, graphic, audio and audiovisual material in this site is protected by copyright law. You may not copy, distribute, or use this material except as necessary for your personal, non-commercial use. Any trademarks are the properties of their respective owners. More on Hyderabad, India. Jobs in Hyderabad.