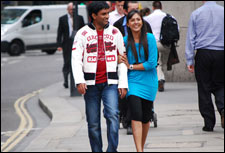 Deepa Garimella / fullhyd.com
EDITOR RATING
2.0
Performances
Script
Music/Soundtrack
Visuals
4.0
3.0
4.0
4.0
Suggestions
Can watch again
No
Good for kids
No
Good for dates
No
Wait for OTT
Yes
Few things complete the NRI angst story than some good ol' marital tension. With a an NRI couple as its protagonists, Karalu Miriyalu attempts to be a light-hearted slice-of-life film about new-generation incapability to sustain marriages. And the flick sure has its heart in its right place, what with its doling out of warmhearted dollops of grandmotherly advice.

It can be tough to even attempt this genre in the absence of a solid script and mature performances, and Karalu Miriyalu shows you just how tough it is. The flick struggles to stay alive throughout its runtime, and completely lacks what it takes to be taken seriously by even the least discerning of its audiences.

Sudheer (Navkesh) and Sreya (Madhu Shalini) have been married for hardly any time, when the bickering sucks out all harmony between them. Sreya's pregnancy forces them to be together despite the stubborn hostility in their marriage. When Sreya's rotund, genial, affectionate grandmother drops in from India, things seem to take a turn for the worse.

The first thing that is wrong with Karalu Miriyalu is its leading man, Navkesh, who needs to quickly pick up a few elementary acting skills. He also seems to have come up with several of his dialogues on the fly, and his Shah Rukh Khan fixation in the emotional scenes prompt many unfortunate sniggers from the audience.

As for the script, while some of the basic battle scenes between husband and wife are quite realistically set up, they are never professionally executed. Mostly, the wife manages to bag the more sensible lines between the two, and the husband is relegated to being an irresponsible and arrogant jerk. There's also a supernatural twist to the tale - something the writers shouldn't have taken up, since they simply can't handle it.

When not showing us how Sudheer and Sreya fight with each other, the flick is doubly lame. Sudheer and his best friend keep hatching plots to get rid of Sreya's grandmother and if they're not being disrespectful, they're being incredibly stupid (for example, trying to leave her all alone in the middle of a forest).

Ratna Sagar, the lady who plays Sreya's grandmother has more life in her than the rest of this movie put together, and manages to keep things rolling. Madhu Shalini (and mostly the woman who dubs for her) does a good job, too. There's Michael Gambon in an inconsequential role.

The visual quality is less than mediocre, and the music follows suit.

ADVERTISEMENT
This page was tagged for
karalu miriyalu telugu full movie
Karalu Miriyalu telugu movie
Karalu Miriyalu reviews
release date
Navkesh, Madhu Shalini
Follow @fullhyderabad
Follow fullhyd.com on
About Hyderabad
The Hyderabad Community
Improve fullhyd.com
More
Our Other Local Guides
Our other sites
© Copyright 1999-2009 LRR Technologies (Hyderabad), Pvt Ltd. All rights reserved. fullhyd, fullhyderabad, Welcome To The Neighbourhood are trademarks of LRR Technologies (Hyderabad) Pvt Ltd. The textual, graphic, audio and audiovisual material in this site is protected by copyright law. You may not copy, distribute, or use this material except as necessary for your personal, non-commercial use. Any trademarks are the properties of their respective owners. More on Hyderabad, India. Jobs in Hyderabad.