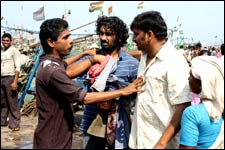 Deepa Garimella / fullhyd.com
EDITOR RATING
5.0
Performances
Script
Music/Soundtrack
Visuals
6.0
6.5
7.5
7.0
Suggestions
Can watch again
No
Good for kids
No
Good for dates
No
Wait to rent it
Yes
Ganga Putrulu is a gentle film - one that deals with the question of the impact that large-scale industrialization is bound to have on the well-being and culture of local communities. Only, it treads the path of a conventional award-coveting movie, painting development as the devil that wants to wipe out centuries of contentment and prosperity; and not attempting to think up a best-of-both-worlds solution.

Set in a village off the north-eastern coast of Andhra Pradesh, Ganga Putrulu describes the present-day life of the fishing community. Traditional small-scale fishing - involving both subsistence fisherfolk and owners of moderate-sized fishing vessels - is under threat from the more powerful, mechanized vessels endowed with technology.

Modern-day trawlers have resulted in overfishing, depleting marine resources and hitting below the belt at an entire colony of people who have no tools or skills for survival other than a fishing net.

A business tycoon Ajay Dheeraj (Subbaraju) has mega-plans of a tapping the mechanized marine processing market across the country's coastline. In the wake of his company's plans, an enterprising TV reporter Swapna (Gayatri Rao) sets out to document the concerns of the fishing community.

Ganga Putrulu is an engaging watch for the curious - it captures life on the coast in rich, documentary style detail. Plenty of the cast seems to consist of real villagers (speaking the coastal dialect, with more than a few instances of crude talk). From fishermen going out into the sea and looking for a decent catch (and, more often than not, returning home disheartened), to the haggling at the noisy weekly bazaar, there's enough material out here to make you want to discover more yourself.

Plus, there are pertinent questions raised, not just about fishing, but also about media responsibility, rapid industrialization, resettlement of indigenous peoples, the locals' self-respect, and more. A romantic track involving the sprightly and dusky fisherwoman Nookalu in love with Bosanna gives the writers some room for philosophy at the personal level, too.

However, the film, like we said, chooses to look at just one side of its debate. The way Ajay Dheeraj is shown as an evil businessmen conniving with equally narrow-minded netas hints at a poor understanding of how civilization depends on commerce for its progress.

A solution is hinted at - by way of a bitter retort by Nookalu - about how the locals ought to be empowered with contemporary fishing technology. However, the prospect is never talked about in more detail, and the movie continues its train of pessimistic thought.

Rao Ramesh, Subbaraju and Swapna act well, and L B Sriram has a few brilliant lines (actually, many of the characters do), but the actors at the forefront are a largely amateurish set. There's also some pointless unrelated titillation in the form of a love song.

Praveen Immadi's music is striking, aiming to both inspire and charm, with its blend of folk strains and semi-classical tunes.

Ganga Putrulu doesn't mean to depress you, but is aimed at being a sort of an awareness campaign. And throw up important questions it does, even if it isn't that good at answering them all.
Share. Save. Connect.
Tweet
GANGA PUTRULU SNAPSHOT

You may want to change that to "Rao Ramesh, Subbaraju and Gayatri act well" :)

ADVERTISEMENT
This page was tagged for
Ganga puthrulu rating
Ganga Putrulu telugu movie
Ganga Putrulu reviews
release date
Gayatri Rao, Subbaraju
Follow @fullhyderabad
Follow fullhyd.com on
About Hyderabad
The Hyderabad Community
Improve fullhyd.com
More
Our Other Local Guides
Our other sites
© Copyright 1999-2009 LRR Technologies (Hyderabad), Pvt Ltd. All rights reserved. fullhyd, fullhyderabad, Welcome To The Neighbourhood are trademarks of LRR Technologies (Hyderabad) Pvt Ltd. The textual, graphic, audio and audiovisual material in this site is protected by copyright law. You may not copy, distribute, or use this material except as necessary for your personal, non-commercial use. Any trademarks are the properties of their respective owners. More on Hyderabad, India. Jobs in Hyderabad.