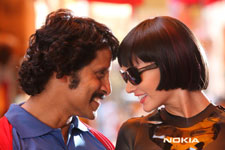 I suffers from that kind of indulgence. The film's central plot is a simple one of revenge. An innocent man who climbs the ladder of success ruffling some feathers along the way is destroyed in an inimitable manner. The destroyed man now sets out to seek revenge against those who destroyed him, in inimitable manners. This story is told in Shankar's grandiose manner with larger-than-life sets and imagery.

For those seeking more detail, Lingeshan (Vikram) is a bodybuilder with a single-point agenda: winning the Mr. India competition. He is also a super fan of a model Diya (Amy Jackson). Certain circumstances force Lingeshan to become a model, and he quickly climbs the rungs of fame and becomes a super model. One day Lingeshan disappears, and a hunchback begins taking revenge against the people who were responsible for Lingeshan's disappearance. The relation between the hunchback and Lingeshan is revealed over a painstaking 2 hours, and the revenge of the hunchback is shown for another hour.

Shankar indulges in I, like we said before. He writes in grandiose fights, spectacular locations, concept-based songs and some inconceivable scientific situations into his screenplay. And after shooting each of these as labours of love, he seemed not to have found the heart to cut out any of them on the editing table. And that is where I suffers - the film's length could easily have been cut by 30-40 minutes.

The other problem with I is the lack of a big reveal. The entire flashback should ideally have been wrapped up in the first half, leaving the second free for the revenge payoff. The screenplay toggling between the past and the present can also prove confusing for some of the audience.

Today and forever, when people speak about I, they will certainly speak about Vikram. The man's ability to completely transform himself for the character is astounding, and the torture he must've put himself through is unimaginable. He also manages to emote under all his heavy prosthetics. Irrespective of the fate of I, this is a once-in-a-lifetime role, and Vikram gives it his all.

Amy Jackson serves to prove that there are people even Shankar cannot extract performances from. The villains are played by Suresh Gopi, Upen Patel, a Vijay Mallya look-alike and a stereotypical gay stylist (Ojas M Rajani), and they all put in hate-worthy performances.

The technical values are mind-boggling. The songs are all shot with concepts each better than the other, and in eye-popping locations that make you wonder if they are real or computer-generated. The cinematography by P C Sriram is of top quality. The music and background score by A R Rahman fit the situations to the T, and elevate the stunt sequences several notches.

I is Shankar's indulgence multiplied many times over. It is very well-conceived, brilliantly shot and all that, but it is also too long to sit through. The amount of detail actually works against this film. If you are in the mood for some brilliance and some gory visuals, watch I, else go get a dekko at the new God in town.
Share. Save. Connect.
Tweet
I (TAMIL) SNAPSHOT 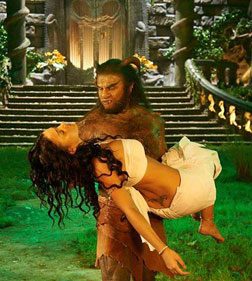 ADVERTISEMENT
This page was tagged for
I (Tamil) tamil movie
I (Tamil) reviews
release date
Vikram, Amy Jackson
theatres list
Follow @fullhyderabad
Follow fullhyd.com on
About Hyderabad
The Hyderabad Community
Improve fullhyd.com
More
Our Other Local Guides
Our other sites
© Copyright 1999-2009 LRR Technologies (Hyderabad), Pvt Ltd. All rights reserved. fullhyd, fullhyderabad, Welcome To The Neighbourhood are trademarks of LRR Technologies (Hyderabad) Pvt Ltd. The textual, graphic, audio and audiovisual material in this site is protected by copyright law. You may not copy, distribute, or use this material except as necessary for your personal, non-commercial use. Any trademarks are the properties of their respective owners. More on Hyderabad, India. Jobs in Hyderabad.