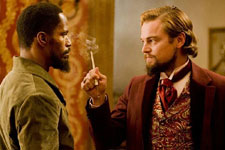 Ravi Kandala / fullhyd.com
EDITOR RATING
7.5
Performances
Script
Music/Soundtrack
Visuals
8.0
7.0
8.0
8.0
Suggestions
Can watch again
Yes
Good for kids
No
Good for dates
No
Wait to rent it
No
One always wonders how a good writer comes up with the lines that he does. In a Quentin Tarantino movie, this thought gains all the more precedence, when you listen to the dry-humour-laden parleys that his characters oft indulge in. The image that comes to mind when you watch any of his films is that of a man playing chess against himself - walking thoughtfully from side to side of the board and making each move with equal thoughtfulness.

Tarantino must probably do that - imagine himself as the two, three or even four different characters in a movie, and think of how the said part would react in a particular situation. And to do this as perfectly as he does, he must have tens of characters walking around in his head. A scary thought normally, but cinematically, a treat for fanboys.

Django Unchained, Tarantino's latest movie, is yet another triumph for the writer-director. It is nuanced, well-written, gory as hell, slow and rambunctious, and gives you a feeling of fulfillment. An old-style western is probably one of the best genres to portray the director's love for stylized violence, and he sure does not disappoint.

Django Unchained is about Django (Jamie Foxx), a slave being taken away to slavery. Django is bought by Dr. King Schultz (Christoph Waltz), a dentist, who, by his own admission, has not touched a tooth in a long time - Dr. Schultz makes a living as a Bounty Hunter.

The latest bounty that the man is hunting is a trio that has only been seen by Django. Dr. Schultz just wants Django to point them out to him so he can kill them, but Django goes one step ahead and helps Dr Schultz kill the trio.

This forges the beginning of an interesting partnership between the two, at the end of which Dr. Schultz promises to help Django find his wife, Bromhilda Von Shaft (Kerry Washington), who was sold at a slave market in Mississippi.

The duo finds that Bromhilda has been sold to the Candie Plantation, owned by Calvin Candie (Leonardo DiCaprio), and proceed to the plantation to rescue her.

Django's rescue, the partnership and the mission take up the better part of three hours, but the movie is impeccably written, and the length is seldom a burden. If the Devil lies in the detail, Quentin Tarantino must be the Devil himself. From the moment the titles come on in a frayed red font on a hilly background, to the final flourish of Django riding away on his horse, each frame of the film contains exquisite detailing.

The period is defined with as much authenticity as could have been possible. From the bottles of beer to the treatment of African-American slaves, from the cigarettes to the costumes, from the guns to the candlestands, there is nary a thing that looks out of place.

Tarantino's research also shows from the elaborate conversation about phrenology, a phrase coined during a period that psychologists would rather forget.

The film's hero, by virtue of having the titular character, is Jamie Foxx, but the one who walks away with all the cheers and honours is Christoph Waltz. Jamie puts in a fine performance, and is aided by what is certainly an author-backed role, but is simply overshadowed by a Christoph Waltz special. After a deliciously devilish performance in Inglourious Basterds, Tarantino's previous movie, the actor returns with yet another scenery-devouring performance.

Leonardo DiCaprio puts in a fine turn as Calvin Candie, the smooth-as-silk operator who turns particularly vicious when provoked. A good part of the latter half of the movie also features Samuel Jackson in a brilliant cameo as Candie's manservant Stevens.

The production values are top-notch, the outstanding background score - a given in all Tarantino movies - is brilliant, and the supporting cast members all put in fine performances.

If you are a Tarantino fan, we know you have already booked your tickets to the movie, but if you are not and are deciding whether or not to go, we would advise you to look up some of his earlier works. If stylized gore, fountains of blood and men pulling each other's eyes out with bare hands is not your idea of Sunday entertainment, please stay away.
Share. Save. Connect.
Tweet
DJANGO UNCHAINED SNAPSHOT 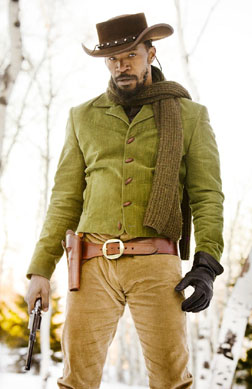 ADVERTISEMENT
This page was tagged for
Django Unchained english movie
Django Unchained reviews
release date
Jamie Foxx, Christoph Waltz
theatres list
Follow @fullhyderabad
Follow fullhyd.com on
About Hyderabad
The Hyderabad Community
Improve fullhyd.com
More
Our Other Local Guides
Our other sites
© Copyright 1999-2009 LRR Technologies (Hyderabad), Pvt Ltd. All rights reserved. fullhyd, fullhyderabad, Welcome To The Neighbourhood are trademarks of LRR Technologies (Hyderabad) Pvt Ltd. The textual, graphic, audio and audiovisual material in this site is protected by copyright law. You may not copy, distribute, or use this material except as necessary for your personal, non-commercial use. Any trademarks are the properties of their respective owners. More on Hyderabad, India. Jobs in Hyderabad.