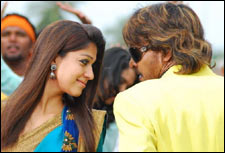 Deepa Garimella / fullhyd.com
EDITOR RATING
2.0
Performances
Script
Music/Soundtrack
Visuals
7.0
2.0
3.0
5.0
Suggestions
Can watch again
No
Good for kids
No
Good for dates
No
Wait to rent it
No
It's always tough to fight with a government office. Especially if you don't have Anil Ambani's bank account number. And Subhash Chandra Gandhi (Upendra) finds this out the hard way - when his attempt to fight for the pension of an absolute stranger leads to all-out war with the local goondas and MLAs.

Ironically, Gandhi is a man who is used to travelling in limousines that are longer than the average queue of people trying to get out of this film. He happens to be the ultra-rich heir to the prestigious Gandhi & Gandhi group of industries, a London-based company.

Basically, Gandhi is married to a girl Indira (Nayantara) who cheated him into marriage because she has an agenda of revenge. How Gandhi gets to turn her around, but mainly, how he changes India from a land of losers, corruption and poverty to a land of honesty and riches, forms the plot.

Upendra's trademark eccentricity is up for display in what is a highly jingoistic movie that has no room for subtlety of any kind. The film opens with a passionate narrative of how India was looted and plundered by countless foreign invaders. It then zips to a childishly-fantasized vision of what India will be like in the year 2030 - with Indians having embraced their ancient culture, Westerners employed in menial jobs serving Indians, Indian currency being more valuable than the pound, and so on.

The movie then attempts to explain how India got there, and starts off on its weird train of thought of how the super-patriotic Gandhi woos Indira, and how he eventually gets down to fighting corruption in India.

Upendra's ideas are well-intentioned - the film is one long acrimonious commentary on patriotism, social evil in India, and politics in Karnataka - but lack maturity most of the time. For example, his depiction of Englishmen as modern-day beasts who will do anything for money and women is completely shallow and unintelligent, not to mention grating on the senses.

Upendra, as we have noted earlier, is a fine actor, but has questionable writing skills. His star power might have pulled crowds to making this a hit in Kannada, but to replicate the results here, we'll need free biryani and Coke at the venue, plus a chance each to star in a movie of our own.

So, yes, Upendra acts well and has pages and pages of thumping dialogues to deliver. Nayantara is a gorgeous accessory to the film, what with her traditional Indian look and all. Ali plays one of the "Cheddy" brothers, in a spoof on the Gali Reddy brothers, and is boring.

And the film is loud in general - the conversations, the dialogues, the songs, the imagery, the extra-swanky editing, and a couple of wacko hairdos the hero sports.

See Upendra full details
UPENDRA USER REVIEWS
1 - 3 OF 3 COMMENTS
POSITIVE  |  NEGATIVE |  NEWEST  |  OLDEST  |  MOST HELPFUL  |  LEAST HELPFUL
hiphopharry8 on 4th Jun 2012, 3:17pm | Permalink
Go to YouTube and check, Superstar Rajanikanth has praised Upendra and his movie SUPER & desired to work with him if a good script is provided :):):):):):)
'SUPER' Movie is a supehit in Telugu as Welll.... Yipieee.... I like it.... I like it.... :P
So much for the critics... ;)
hari prasad on 4th Jun 2012, 3:10pm | Permalink
In the 90s Upendra exposed Blore gangsters in a movie 'om'...then he exposed the casting couch in movie 'A'. Then he exposed ' human s changing emotions in the movie 'Upendra''.then he exposes Karnataka-Tamil nadu water dispute in movie 'H2O'..after 10 yrs now he directs a movie that exposes 'corruption and solution for it'.... Wat more do u want from a film maker who daringly exposes reality thru his films... I do agree that his style is crazy and extreme but that's how it shud b told .... For example, A kid has to b beaten and explained not to do mischief, rather than pamper... Bcos v all learn only the hard way :):):):)
Dr Sundar on 17th Mar 2011, 1:23am | Permalink
deepa you have lost credibility. super is a sensible movie with parallel narration. only people with brain can understand. i advice you to see it again. every one coming out of the hall was discussing about the issues highlighted in the movie. though the solution was not practical, we should commend upendra for his unique style of story telling. this movie deserves best rating. those who want to see special movie with entertainment watch this. even the dubbing, lyrics , dialouges were much better than regular telugu movies for which deepa gives 6 stars

ADVERTISEMENT
This page was tagged for
upendra movie message
upendra telugu full movie
upendra movie review in telugu
upendra i l u movie review telugu
upendramovietelgureview
Follow @fullhyderabad
Follow fullhyd.com on
About Hyderabad
The Hyderabad Community
Improve fullhyd.com
More
Our Other Local Guides
Our other sites
© Copyright 1999-2009 LRR Technologies (Hyderabad), Pvt Ltd. All rights reserved. fullhyd, fullhyderabad, Welcome To The Neighbourhood are trademarks of LRR Technologies (Hyderabad) Pvt Ltd. The textual, graphic, audio and audiovisual material in this site is protected by copyright law. You may not copy, distribute, or use this material except as necessary for your personal, non-commercial use. Any trademarks are the properties of their respective owners. More on Hyderabad, India. Jobs in Hyderabad.