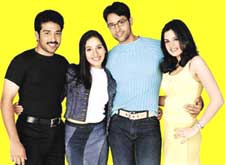 Some self-sacrificing noble soul (read as b-a-k-r-a) at fullhyd.com had the misfortune of watching this Rolls Royce of bad movies called Idi Maa Ashok Gadi Love Story - IMAGLS - a couple of days ago. Ever since, he has made it his mission for life to warn people about what, unquestionably, is a gargantuan waste of celluloid ever made. He says, "You could lie in your bed for two weeks barking at the ceiling and still have a more interesting and amusing experience than you would watching this alleged movie. Do the dishes, take out your neighbor's pig, take Chinese lessons, do anything but please, please, stay away from this movie!"

The film gets underway, routinely, with the hero and heroine falling in love with each other. In two wags of a dog's tail, the movie routinely takes a 180-degree turn, with Ashok (Siva Balaji) giving Gauri (Kanchi Kaul) the boot when she needs him the most. This U-turn, routinely, serves as a foundation for two subordinate storylines. The first is the goodwill that develops between Gauri and a guy (Manoj Bidwai) who wants to marry her. The second, of course, is the bubbly encounter between Ashok and a girl (Swetha Agarwal). The film, mercifully, ends with the routine reunion of Gauri and Ashok. 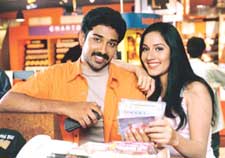 Director Suresh Krishna seems oblivious to the fact that the film is cartoon-ish, as he lets inane claptrap attempts pass off as serious dialogue. With the exception of Gauri, most of the other characters are cardboard cutouts of your favorite stereotype action figures.

Siva Balaji thinks he's Tom Cruise! How so? Well, to put it briefly, he thinks he's Tom Cruise in 'Top Gun', or something in that fashion. All ego, no judgment. You know, like he's more concerned with showing off what a hotshot he is going to be than getting the job done. Kanchi Kaul plays the uncharacteristically mature Gauri, and in all probability delivers the most dynamic performance of the cast.

The rest of the cast, briefly put, should hide in shame. Chandra Mohan, despite being a decent actor, overplays the empathetic father routine to the point of being ridiculous. Swetha Agarwal, who always came across as a bit cold, takes her character to the arctic, only to become a weepy basket case at the end in a stunning reversal.

The music, composed by Anand-Milind, is the only optimistic peak in the movie and manages to strike a good balance between sentimental tear jerking and sweet love ballads. While touching on the painful side of lovers' quarrels, it always offers an uplifting hopefulness about a happy ending. Probably the better word is that you will find it "distinctive." And, in today's music world, that is high praise indeed! 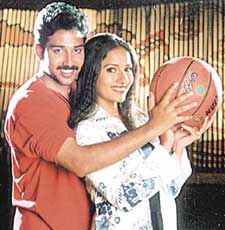 All things considered, IMAGLS is just another film that has its heart in the right place... the director and crew wanted to make a pretty film about the tribulations of coming out and being realistic. But, unfortunately, they don't back it up with anything to put some meat on the film's bones. The script just goes off at a tangent, the acting is terribly clumsy and the camerawork just clunks. Worst of all, the film's treatment of women is unintentionally hysterical and borderline offensive.